This post will provide a summary of feature changes since the last update, as well as information regarding the current state of the Splinter Stats Report Card (announcement).

For those who haven't been following along with @splinterstats and my (@kiokizz) Splinterlands Statistics, welcome.

With the start of Season 56's reports, sections of the report card which rely on card usage statistic, have been removed. This includes:

Due to an error in the Splinterlands API the majority match details are no longer showing in the account history, making these sections both sparesely populated and innacurate. When I become aware of this being fixed I will update the Report to include these again.

The remainder of features should behave as usual.

The era of rentals paid in DEC has come and now feels like the new norm. For those who weren't aware, you can generate a report of your earning and spendings on rentals as part of the report:

As a sidenote here, how many people are renting their cards on separate accounts, and are unable to generate the report card due to that 'season played' check? If wanted I can make a separate tool for this.

Some general notes regarding the report card, primarily around data availability from the API:

A thank you to everyone using the Report Card to make a Hive post and supporting developement through your beneficiary.

As a token, and to support your future blogs, I have sponsored each account that posted during the last season with 2 Hive SBI (Hive Stake Based Income) shares. Please read this post for answers regarding HBI. 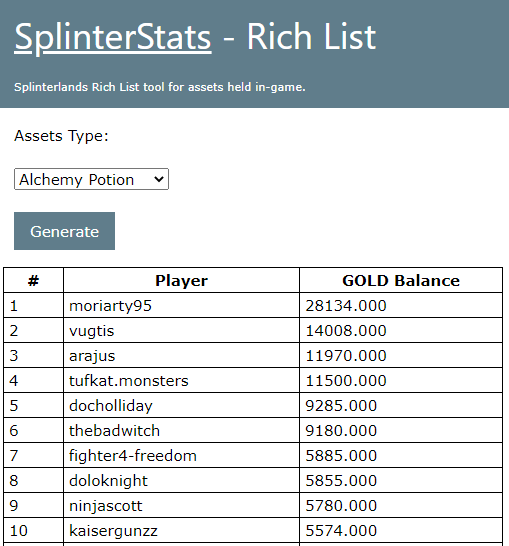 It may get an update at a later date, though it is currently on the back of the priority list.

Thanks for your time. If you have any data requests or issues with any Splinter Stats pages, please respond here or leave a message on Discord. Not all suggestions may be practical to implement, or will get prioritised, but your ideas shape the future of @splinterstats.

Good work my man. Such useful tools and the ability to create an easy to read post out of the data is awesome!

Just about to do last season now. 😁

This really is an amazing tool for tracking your progress 😉

Thanks so much.
Great tool for a newbie like me.
Cheers.

Thank you, @splinterstats, for your support of my work.

I'd like to offer a reward to the Hive community & hope you might help me to get the word out:
https://ecency.com/hive-150329/@yahia-lababidi/congratulations-hive-on-ath-and

Much appreciated & keep up the good work!

Awwww, thanks dude! Love what you do!

I am unsure if they are aware the report corresponds to the current play season, a mistake atleast one person has made.

Thanks for the tools that you make. A real MVP for the community!

Oops, typo on my part in that line.. Always re-read things twice!

Updated to: I am unsure if they are aware the report corresponds to previous play season, thinking it belongs to the current - a mistake atleast one person has made.

@splinterstats! I sent you a slice of $PIZZA on behalf of @amphlux.

Looking good! Way to invest and play with Splinterlands!

I’m seeing some key names missing from that user list @clove71 (sorry @clove for the mis-tag), and others who I’d feel way worse about pinging to raspberry in public. 😁

Thanks for your update!
Waiting for these stats come back

It's very important for me to identify which cards that I should rent/buy to increase the benefit :)

hi, thanks for the shares.
Also your tool is amazing!, look forward to any future updates :D

one questio tho, im generating the report of the new season but it seems its been stuck for a while or it should take this much time? the older season one was done real quick

Hello. Thanks for the error report, it should work for you now 👍 I found a bug that was looping the code where an account had more than 500 SPS transactions in their history.

Thank you for the update. I'll make my new report card soon

Thanks, that's a great gesture and I really like the report card to keep track of my game progress. Appreciate all the work put in!

Some thoughts:
the lists are kinda lenghty already and with the new sets for chaos legion and reward cards this will get even longer. Any way a drop down/collapse menu would be possible or maybe a slightly shorter list?

Another thing I really like to add myself is the total collection power and value according to the peakmonsters website, I add these manually and keep the old numbers in to really see the progress over time. Might be a nice feature to include (if at all possible, if not just disregard my babbling).

Thanks for all the work you do. I know that the report is for the old season so I generally publish mine on my own time. So the two offline sections won't be fixed the previous season right? I am just wondering before I publish my season report card.

This really depends on when the Splinterlands developers dedicate time to it, as it is likely a lower priority than getting new rewards cards and Chaos Legion presale on the way.

Thanks. I will wait a bit before publishing my report then. !LUV !PIZZA !WINE

Did you know you can earn $PIZZA through Hive-Engine Diesel Pools? (2/10)

Thanks for the mention and thanks for making this report tool, I'm about to use it for last season!

Congratulations @splinterstats! You have completed the following achievement on the Hive blockchain and have been rewarded with new badge(s) :