Nice, 10% is very good. Nice to see you again. This is @armen from steemit days. Back at it posting my weed grows.

Are you satisfied with how the peg has been holding? I guess many people are really encouraged as they see it stay close to $1.00 better than ever before.

One possibility for improvement might be to change the HBD to Hive conversion operation to resemble the Hive to HBD operation. Hive to HBD gives you 50% right away. But HBD to Hive makes you wait 3.5 days to get any Hive. This seems to put a delay in how fast the hbdstabilizer (and any other potential actors that want to stabilize the HBD price) can react.

I think we should give it some time and assess.

very nice... time to take advantage of it!

Has there been a significant increase in saved HBD?

I think there were some errors in that unless he fixed it.

I looked only at deposits, and there was around 800k, but one big player has withdrawn a big amount as well, so the net is somewhere 500k to 600k.

It's easy to get this data from HiveSQL, it's currently ~650k HBD 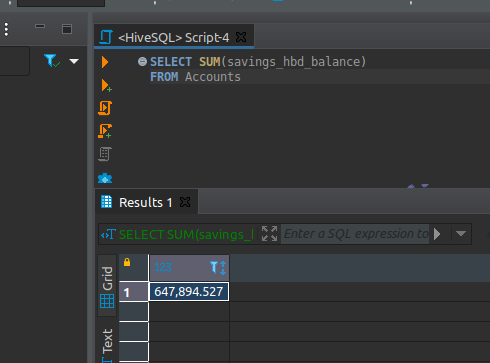 Yes it is changing a lot these days :)

I don't know how to use HiveSQL (nor any other tool that can do this) so I don't know but last report I saw it had increased from 400k to 550k. That was several days ago, before the increase to 10%.

I do know that the flow direction of the stabilizer is still absorbing HBD from the market rather than supplying it (likely due to bag holders from the pump continuing to unload it). Perhaps that will start to shift after the change 10% which just happened within the last day or so, we'll see. Plus, of course, the bag holders will exhaust their bags at some point too.

It will be interesting to watch what is happening with it over time as demand rises and falls in the markets.

well , I can speak for myself: just bought some HBD to save it. 5k =D yay! now hive has an interesting savings account!

stabilizer has done a good job but now we are at the point where we need hbd/usd pair, Hive-Engine SWAP.USDC/ SWAP.HBD pair would be a good start

Short and simple but meaningful.
I love this interest rate of 10%. Almost double of what banks pay here.

I think realistically at least some of the witnesses are going to want to give it some time to see if 10% generates high demand.

At a glance I'm seeing a range of 5% to 12%. Is it possible to receive a different rate than the stated 10% dependent on which block producer did the thing with the stuff and the transactions at the time?

It's based on the median so the median would have to shift (why it rarely changes).

Ah yes, so it's "official." I noticed it had jumped to 10%; that's a pretty nice incentive, especially if the peg holds reasonably well.

Would be interesting to read your thoughts on @edicted's idea to make an internal AMM.

I would like to see that done via a smart contract platform as I consider the functionality too complicated and potentially unstable (in the sense of wanting upgrades) to make it a good fit to build into the base layer.

Once we have that, sure it is a reasonable application to build.

now we need to get rid of the 5% converting fee and we can expand massively on HBD.

I don't know how to tell if that is a good idea.

I think that the conversion fee is superfluous. The interest paid on HBD savings could be a factor that drives demand for Hive but the 5% fee effectively cuts into the APR right off the bat. There is already an inherent risk that the conversion will result in receiving less HBD per hive due to the 3.5-day delay in completing the operation (compared to the market rate).

Also, if the conversion operation uses the lowest price from the feed as initially proposed by @blocktrades (instead of the median), we have another hidden cost under certain market conditions. But I am not sure if that logic was left in the code.

It cuts into the APR if you use the conversion operation, but in practice you can buy from the market and not pay the fee (or even buy at <$1 which is effectively a negative fee). We have no experience seeing sustained market conditions where the price remains at or even near 1.05, so it would be rare for anyone to be paying the fee. The only time it happens is if and when the price of HBD goes above 1.05, in which case you can make an immediate profit by selling it (clearly worth paying the fee).

There is already an inherent risk that the conversion will result in receiving less HBD per hive due to the 3.5-day delay in completing the operation

I guess it's a risk strictly speaking, but you can also receive more.

It uses the median. The lowest price is only used to determine the excess collateral needed for the 3.5 day loan (it is a loan because the HBD is delivered immediately even though the rate is determined and the actual conversion can be said to occur after 3.5 days).

It uses the median. The lowest price is only used to determine the excess collateral needed for the 3.5 day loan (it is a loan because the HBD is delivered immediately even though the rate is determined and the actual conversion can be said to occur after 3.5 days).

I misunderstood the mechanics of the conversion process. If we view it as a loan instead, then a fee is justified. I still think that it is a bit high (~2 percent would be better in my view), but that is just my opinion.

I would like to see both conversion operations shifted down by half the fee (i.e. convert HBD to HIVE at 97.5 and convert HIVE to HBD at 1.025) which would make the fee 2.5% in effect. But it could be that the total fee should also be smaller (say 1% on each side). In any case I think we should assess for a while before making any changes.

I do like it. I believe it will provide stable ground for steady pegged HBD.

Thanks. Moved all my HBD to savings.

I'm starting to feel better about using HBD as a stablecoin with everything that has been happening. Good to to see the jump to 10%!

Wen test of the peg?

I was hoping for some easy money.

Trade on the internal market if you want to get a $1 price, the stabilizer frequently brings it back to $1 there.

I was just hoping that I could start converting right away rather than have to wait for a pump.
Where is that $15 hbd now?

Congratulations @smooth! You have completed the following achievement on the Hive blockchain and have been rewarded with new badge(s) :

$0.00
Reply
[-]
poshtoken (76) last year
The rewards earned on this comment will go directly to the person sharing the post on Twitter as long as they are registered with @poshtoken. Sign up at https://hiveposh.com.
$0.00
Reply
[-]
antoniojoseha (66) last year

You're probably wondering why such a small post got so much reward. The answer is simple, all the rewards for this post are going towards funding future development of Hive, rather than to the poster (that's what that beneficiary message at the bottom of the post is talking about).

How it works? I should moving HBD to Hive Savings? or not?

If you plan to keep the HBD for a while and won't have an immediate need for it, then yes, it is best to keep it in savings, because it will collect interest payments there.

Takes 3 days to get it back out. That's the tradeoff.

I forgot to thank you for this heads up that I passed on to some folks ... until now. Thank you!

What's happened with @hbdstabilizer? It hasn't made any actions in a few hours.

Not sure why but the bot got stuck (first and only time). I restarted it everything looks normal.

Not sure why but the bot got stuck (first and only time). I restarted it everything looks normal.