How to Measure Consensus on Group Values 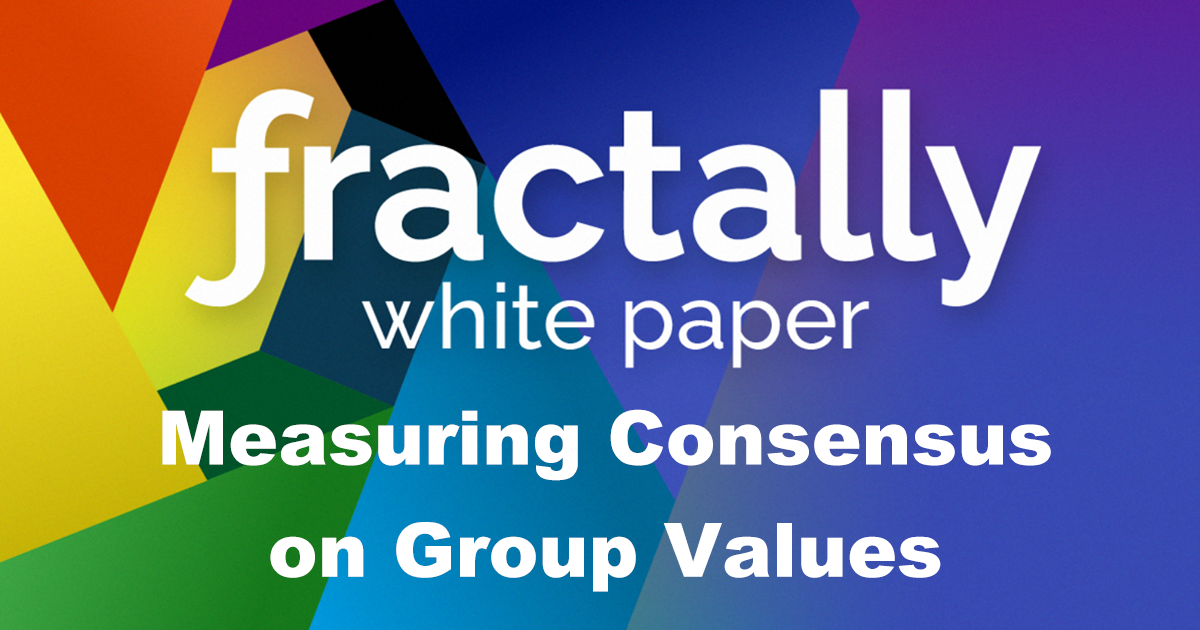 Many in the Genesis Fractal community are interested in a mathematical model for the process that supports (or may contradict) our intuition about the relative merits of fractal democracy over prior forms of governance. We have introduced the analogy of people as scientific instruments attempting to measure the relative value of each individual’s contribution to the public good.

In the spirit of this thought experiment, I would like to add some new ways to model the process. The first step is simplifying the model to the most “objective” case possible and then gradually introducing more subjective factors.

Consider the case where “public good” is defined as direct donations to all other members. In this case, Alice might give $10 to all other members while Bob gives $4, while Sam gives $11. In this situation, we could “objectively” see that Alice gave 40%, Bob gave 44%, and Sam gave 16%. However, if these three people were forced to utilize the fractally ranking process, then Sam would get 66% more than Alice despite only giving 10% more. Meanwhile, Bob would get 66% of what Alice got despite giving 60% less than Alice. In effect, the forced ranking on this objective system cannot match the “true value” of each individual’s contribution to the public good.

However, if all contributions were cash, we already have a system for allocating equity among shareholders, which does things on a pro-rata basis. This model is an oversimplification of the process, which doesn’t make sense because there is no “governance” going on. Everyone collectively receives the same amount of money, and those who give more than average take a loss, while those who give less than average make a profit. This is a prime example of a moral hazard.

The market price of steak, chicken, and candy has nothing to do with the individual preferences of Alice, Sam, and Bob. For example, Alice might be health conscious and not value candy at all. Meanwhile, Sam might like chicken better than steak, even if the chicken is cheaper. Meanwhile, Bob might be vegan and value the candy above any meat. All parties contributed food to the public good, but how should they reach a consensus when it is entirely possible that all three people have completely different rank-order preferences, which are completely at odds with broader market pricing of the goods contributed?

Value is not objective nor absolute, and there is no universal scale of value. Austrian economists would stress “Ordinal Utility”. Another word for “utility” is “value” or “respect”. Ordinal numbers involve ranking such as 1st, 3rd, and 8th, while cardinal numbers are things like 2, 19, 34.7. You can perform arithmetic operations on cardinal numbers, but it would make no sense to perform mathematical operations on ordinal numbers.

Ordinality comes from human choice where if we value A more than B we are willing to trade; otherwise, we hold. There is no ability to say “how much more” we value A than B, merely that given the options, we would rather have A than B. Money can confuse things because it is divisible and fungible, but every individual has a different ranking of money, and that ranking depends upon many factors. For example, your first gold coin may be more valuable than your 1 billionth gold coin. Different people rank gold higher or lower relative to other real things at any given point in time, and the result is a trade.

Given that highly respected economists recognize “value perception” as ordinal, it only makes sense that the fractal governance process also operates in the domain of ordinality. People are randomly grouped and asked to reach a consensus on their relative rank each week. Over many such meetings and times, the community is able to calculate an average ranking.

It should be noted that math on ordinal values is typically suspect. Our math aims to produce a statistical model that predicts the expected value of the rank an individual would achieve in a random group of peers. In statistics, the expected value is the sum of all possible values multiplied by the probability of its occurrence. In fractally we use the average ranking to represent the most probable consensus ranking.

What we value is pareto distributed. Create a list of the top 100 things you value and then attempt to put a dollar value on them. Chances are there are some things you value more than almost everything else combined. This means that while, for economic purposes, we can only assume ordinality (rank order values), we can say that a pareto distribution is a better approximation of an individual’s scale than a linear model. Even with pareto the long tail of low-valued items appears linear as they are approximately equal in “absolute terms”. An individual would have a very hard time ranking the long tail simply because the “real difference” in value between them is smaller. Meanwhile, the ability to sort highly-valued items from lowly-valued items is much easier. For example, you can more easily value your family over your silverware, but you may have a hard time determining whether you value a spoon or fork more.

Rank order is not necesiarlly transitive. Meaning that if you value A over B and B over C that you may not value A over C. This is because value is multidimensional. For example, you may value speed over strength where A, B and C have different quantities over speed and strength. In this case C might be better than A. In effect, certain combinations of values are better than others.

When a community attempts to integrate the rank-order opinions of 100 people it isn’t as easy as asking everyone to sort all 100 people and then averaging it. This would have to assume transitivity. Not to mention, it would be really difficult for one person to consider 100 let alone 7000 other people. It is simply too much to ask anyone to do. Given the lack of transitive property for ranking we can model the number of groups of people as the number of possible combinations selecting 6 people at random from 100. This is 1.2 billion combinations each of which may reveal a different order. The numbers become astronomical when you grow to 7000 people. In other words there are too many combinations and rankings to actually make all of the measurements directly and therefore we need to substitute an approximation.

A random sampling to produce an average expected value for rank is likely the most accurate way to account for the multidimensional nature of value and the lack of transitive comparison. This lack of a transitive comparison means that attempts to compute an individual’s group error by comparing an individuals performance in one group relative to their average ranking by other groups is not valid.

Another aspect to fractally is that a groups ranking is not a simple mathematical transformation of the individual rankings. There is discussion, compromise, and give and take considerations. This means that no single individual is actually directly making a measurement because the consensus opinion may differ from all of the individual opinions. The give and take during consensus building is a form of barter where people are trading subjective social values to maximize consensus. Each of these social trades, in theory, leaves all of the participants better of than before or they wouldn’t have made any trades.

This has huge implications because it isn’t possible to say that Joe is a noisy instrument just because last week Joe valued Jill over Jack and this week Joe valued Jack over Jill. Each week Joe, Jack, and Jill were grouped together with different groups and had to make different social trades to reach consensus. It is entirely possible that Joe’s values this week changed because of how he expressed his values last week.

Creating a mathematical model of human action and integrating individual values into group values is not trivial. Fractally is built on some basic principles, including an ordinal value linked to a Pareto scale (defined by Fibbionacci) combined with statistical sampling to overcome the computational impossibility of measuring and integrating everyone’s rank preferences in the absence of a transitive relationship of rankings.

Any mathematical model is only as good as the assumptions, and people are infinitely complex. Therefore, models of groups of people are impossibly complex to make definitive claims about, given the insufficiency of any model. That said, this analysis provides a strong argument in favor of the structure of fractally's governance model.

Rule by force is the disease, who and how are symptoms.™

As long as people accept violence as a means to their ends, peace is not possible, only varying degrees of enslavement to those most willing to use violence.

When ideas are allowed to float to the top based on merit we will know peace.

Rule by force is a symptom of the masses collective desire to rule by force. We must move past end justifies the means thinking.

I'm with ya.
There are two books that seem to outline it much better than I can:

The Iron Heel explains why what we have is what we get in chapter 9.
If you can dispute the math in that chapter I am all ears.

Looking Backwards offers an optimization to what we currently have.

Personally, I like this short story: And Then There Were None for its direct approach to the problem, but if you check the publication dates of those you will see that having solutions already out there is no guarantee of their success.

They don't have to burn books when nobody reads them.™

Yes this was one of the questions I had about the contribution ranking system.

Ordinal value systems seem to simplify the process and may capture contributions that normally might not be recognized, but there are a couple issues:

There are pros & cons with each system, but I think it's important enough of a difference that it may be good to have both options on the platform.

Excellent work. And, thanks.

It is entirely possible that Joe’s values this week changed because of how he expressed his values last week.

Want to stress this. This is a social game and it probably makes it infinitely complex to model accurately.

Good points. Just as it is prudent to begin with objective measures, and then slowly add more complex subjective factors, it is also useful to recognize that mathematical models are only one approach, and are often insufficient for the problem at hand.

This means that no single individual is actually directly making a measurement because the consensus opinion may differ from all of the individual opinions.

Also, the object of measurement would be the whole network of hundreds of participants. Now, because of the complexity of measuring the whole network, all we can do for now is take "localized" measurements of small groups of 6 people. Pretty much as someone who is trying to understand the ocean, takes random samples at different locations/times.

@dan, Please confirm whether this interpretation approaches your vision or not.