Another Day Another Magnor!

My favorite Battle Of The Day once again pitted my team against Magnor the Legendary Fire Giant and this time he was with Yodin Zaku the summoner. To make matters worse I was facing a max level Magnor. These things are dangerous enough when they are a Level 3!

At the start of the match my Feral Spirit struck at Magnor and drew first blood. This really pissed Magnor off and his Enrage ability increased his attack and speed and suddenly I was facing a much more dangerous monster. 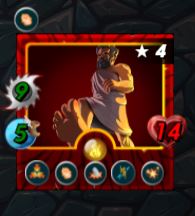 Magnor responded with a devastating blow to my Silvershied Paladin and destroyed his shield and the shield of my Silvershield Assassin as well. By the end of the round all of my team had lost their shields, but they were still in good health thanks to the shields absorbing the first round of damage. Magnor was not so lucky. He was poisoned and bleeding from many wounds.

Round 3 only lasted as long as it took for my team to rain down a couple more attacks to finish off the opposing Fire Beetle.

Have you tried the Number 1 #play2earn game that is fast becoming a household name? Get in on the fun at Splinterlands now!

Thanks! It's even nicer when the Rare summoner is mine ;)

Its good to see you with win and preferably you have played very well.

Thanks! It feels good to beat a much stronger opponent.

You really are a Magnor Slayer. This time was a close battle but armor really saved you. congrats

Tyrus and his Shield ability really saved us this time.

A victory over Magnor and Zaku is one to be excited about. That's a sweet victory, come facing Magnor without shields and you are guaranteed to be wiped out in a blink of an eye.

without armor I would just hope to stun it in time...if that doesn't work he wins.

Yes, I've had hopes of victory Trampled many a time by Magnor. Shields at least give us a chance.