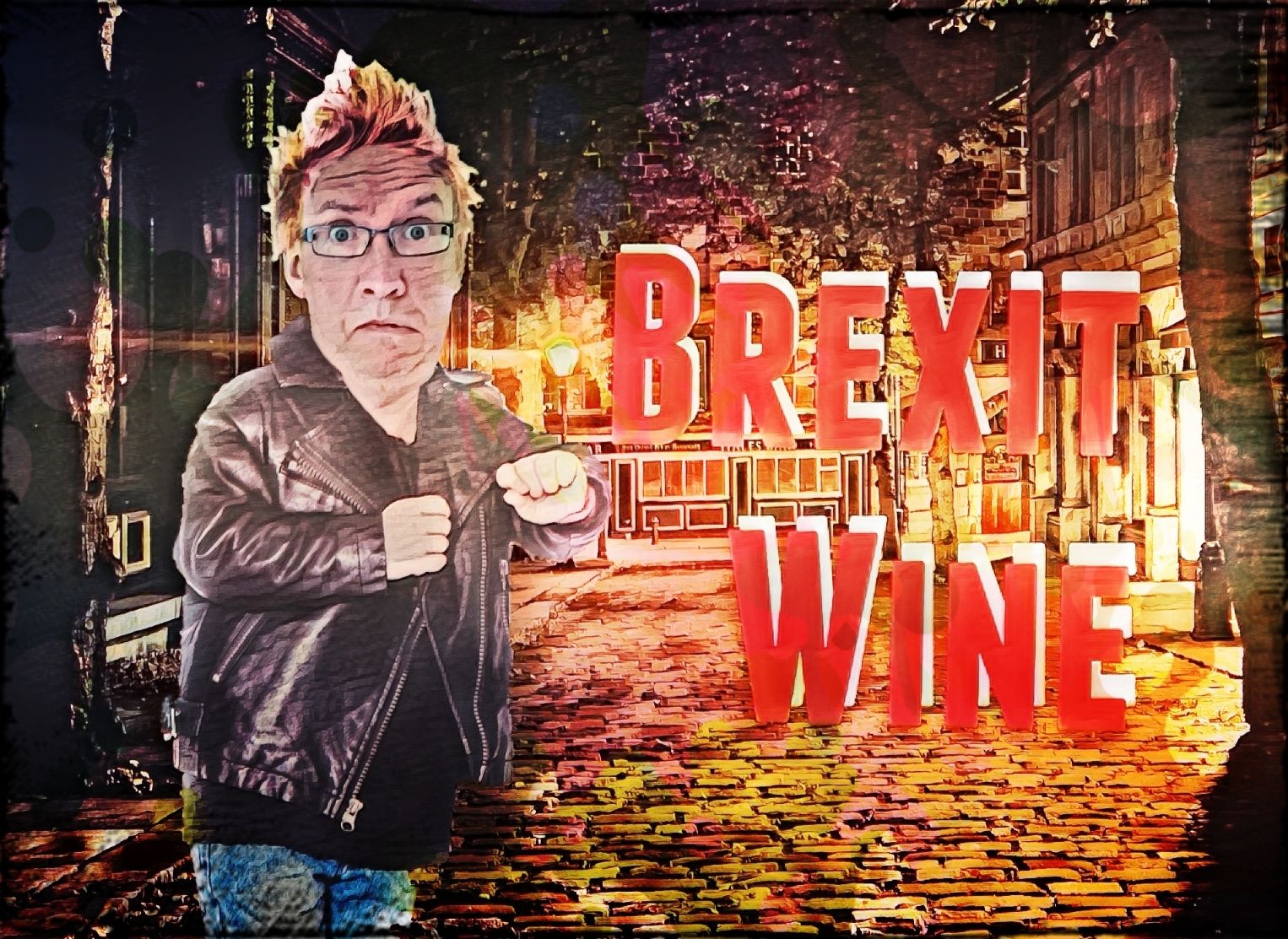 You won't forget the wine will you?

The Good Lady trilled happily like a hungover budgie eating a freshly boiled Whelk.
A note on whelks: Although available the world over, they are particularly common among the gutter folk of Glasgow. Sold by such delightful places as this - and no, they are not 'delicious.' They are fucking horrible.

Yeah yeah, sweetcheeks. Don't worry, the wine is top of the list!

I mimed one of those paw waggling lucky cats that were so often to be found in Casinos and old peoples windows.

The Good Lady frowned in consternation as if she had caught me doing the naked Milk Lemonade Chocolate dance again.

Well, anyway. It's getting close to Wine o'clock! Are you going to be quick? Give us a chance to say hello to the weekend properly?

Ever since the Good Lady had gotten her new 'job' which involved receiving no money whatsoever and which she hadn't even started yet. She had become a crazed goodtime girl determined to eke out the absolute best of every weekend before she was consigned to the dustbin of employment again.

And for the Scottish, the typical way that such enjoyment was expressed was through the medium of drinking.

Which was fine with me as I had been a weekend lush for more years than I cared to count.

Yeah, I will be as fast as I can. What wine are you wanting?

I said with an entirely straight face as if we ever drank anything but the same thing over and over again.

Oh, ha ha. The Barossa, that one we like. Get lots of them. Lots and lots.

She grinned and I grinned too.

It wasn't as if we could drink much wine these days what with the pesky kids and night awakenings and early morning arising shenanigans but we could dream.

Aye. Lots and lots indeed. Say no more, missus. Your wish is my command!

With that I turned on my heel and swept out of the door as if to entertain old ladies with my wazzock.

Excuse me? Where is all the wine?

I asked a young lady sporting the uniform of the local supermarket which made her look like a Victorian Fish-bag.

She looked puzzled for a moment until she noticed that I was standing in front of lots of empty shelves where once racks and racks of glorious red wine once stood.

Oh yeah, it's Brexit, you know. Having trouble getting stock through.

She shrugged her shoulders as if preparing for a game of Rugby with a man named Jeff.

But, there is nothing there. Surely something is getting through?

I pushed a hand out to the shelf to steady myself in case I fainted.

We still have some, yeah, there. Look!

She pointed at a few forlorn looking bottles of watery pinkish-red stuff. The contents were so flaccid looking, even through the tinted green of the bottle, that I was tempted to buy them some Viagra and a few nudey magazines.

I swayed toward them, feeling like I had descended into some cruel multiverse that existed only to fucking torment me.

Light and fucking fruity? Who the fuck wants red wine that is light and fruity? I wanted my red wine dense and dark red, like toffee that has been shat out by a Bison with a sore arse.

I stuttered feebly trying not to sound like a dirty old man talking about bum fun.

No that's it. You better be quick or they will be gone.

She chuckled as if the idea of people having to drink insipid pink piss amused her greatly.

I shook my head. No, this was not going to be. I would go elsewhere and buy fine quality wine that I could be proud of returning home with. Yes, dammit. I bloody well would!!

Some time later I trudged into the house, clutching a tatty looking bag of shame.

The Good Lady cocked a curious eyebrow at me as I shambled past trying not to look her in the eye.

Slowly I pulled the bottles of Morrisons Own Shitty Plonk from the bag.

Hey, what the fuck is this?

The Good lady barked sternly her eyes flicking between the bottles of piss and my good self.

Hesitantly, I cleared my throat to speak.

The Good Lady gasped in horror and I pulled her into my arms to comfort her.

Together we stood there weeping for what was and never would be ever again.

Bison toffee is the best. We get it fresh from Montana. Costs a fuckton per ounce, though.

But it's the best fuckton that you have ever spent!! :0D

They should have forcast that, those anti brexit did shitty pr.
All they had to do is mention the wine. The Euro Sterling shit is not relevant anyway. Better use Hive.

Yeah, if they had mentioned beer or wine there might have been an entirely different result!

Oh! You have been "Chewin the Fat" have you?

It's got to be fun with a new attitude for the weekends, yes? Well, her, I don't think much has changed with you.

Isn't Morrisons the store that @slobberchops worked at when he was a lad that was still wet behind the ears? My eyes are still bleeding from reading about the shenanigans of the store manager.

On another note, grapes sort of grow in Scotland, there are at least 5 Vineyards there. Now if you had more sun, you could grow your own.

I had a grape tree/bush whatever it was. It never sprouted sent grapes apart from two years ago when it was so hot that summer that it did form little miniature bundles of grapes. Them it got cold and the little mini bunches of grapes withered and died. And that is what living in Scotland is like. :0D

You actually have 5 vineyards there, but, there is no big rant about them. They say buy your wine in Spain.

I was going to tell you to grow your own, but, now I know the score. So sad. That is wine abuse, killing off the kids like that. I think this pretty much sums it up?

Oh man, look at that bounty!!!

So Brexit is doing the Milk Lemonade Chocolate dance at you, is it?

I think so. I date that because I am far away from home in the wild East is Scotland sleeping on a mat in the dirt in a tent in a storm. I am also pished on Japanese whisky ironically!

Sounds delightful. I did not know the Japanese believed in things like whiskey, but I imagine if they're making it they're probably making it well.

Glasgow is too damn far away and Storm Whatsisface is causing trouble.., that and the fact you shop at Morribobs is the problem!

I know. It's the nearest place, I had too drive much further to get to a Majestic!

I am heading out to Edinburgh for the weekend right on the east coast where storm whatsitsface is hitting!!

Madness, it's still blowing a gale outside.

It was total shit!! It took two and a half hours to get here from Glasgow. It should be less than half that!!

As always brilliant word smithing matey. I saw the wine crisis comin months ago and dropped a some cash on a bulk buy at M&S. One of my mates I shoot with has a son who works there, so we got him to do do the buying. With employee discount, plus multi buy discount offer we nabbed a bloody good deal. Stocked up on my single malts round that time to. It's looking like people will have to just nab the bottles in bulk when they seem them in stock this winter. Chances are if it isn't brexit blamed it will be something else. Either way dry shelves or shelves stocked with spanish anti freeze will be the result.

Aw man, that is true forward thinking!! It is a crisis indeed. I had to visit friends in Edinburgh this weekend and we passed a place and I dived in and stocked up. Was a bit expensive but the alternative didn't bear thinking about, lol!

I trust the Good Lady applauded your effort after she stifled her sobs. Brexit wine shopping sounds a bit like buying food with an impending hurricane - there will be that shelf with the lone can of low-salt corn dented through its midsection offering itself up like a can of caviar.

Best wishes next weekend for the Good Lady's wine options.

She appreciated the effort but perhaps more so when I went further afield the next day and returned victorious!! There ain't no crisis! At least for a short while. No more dented cans of low salt corn wine :OD

Well at least you all have a proper name to put on the problem. Here every problem is blamed on the always nebulous "supply chain."

I kid you not. The snowy roads here are untouched and not in the least bit salted nor plowed. Why? The supply chain.

They are starting to get like that here. EVerything is blamed on anything other than Brexit, yet everything was fine before brexit. The damn buggers!

All for a wine, but look at it on the positive side, you had your good lady in your arms for several time, I would see it that way, what makes me laugh the most is what you say, she has not started working yet and she is already going out to have fun , take a break from a job that hasn't started, imagine when it starts, get ready to take care of the children and do everything around the house, ha ha ha ha ha, it's a joke, well I hope not.
A hug

I know. It's quite hilarious, like she is acting almost as if she has started and she hasn't even got a start date yet!!

Still, apart from the shit wine it's not so bad. I like her new found devil may care weekend attitude! :0D

Haaaaaa you're having a good time then, I'm happy for you, love, love, Haaaaaaaa.
A hug

Yeah man, a good time. It's hard not to have a good time on a Friday!! Cheers!

You're right, serve more and more wine, enjoy with your good lady, she loves you, I know from what you say in your post, you are a funny man, but good man, I have already analyzed you.

No, don't analyse me. I am beyond analysis ;0p

I already did, I read your publications and draw conclusions, no one will know that you are a good person :)

Hahaha, yes indeed.. As long as my secret is safe we can all live happily ... 🤣

Congratulations @meesterboom! You have completed the following achievement on the Hive blockchain and have been rewarded with new badge(s):