Yura - The landing spot of prince Hachiko, the founder of the Dewa Sanzan 👹🍣🎎 Fascinating Japan 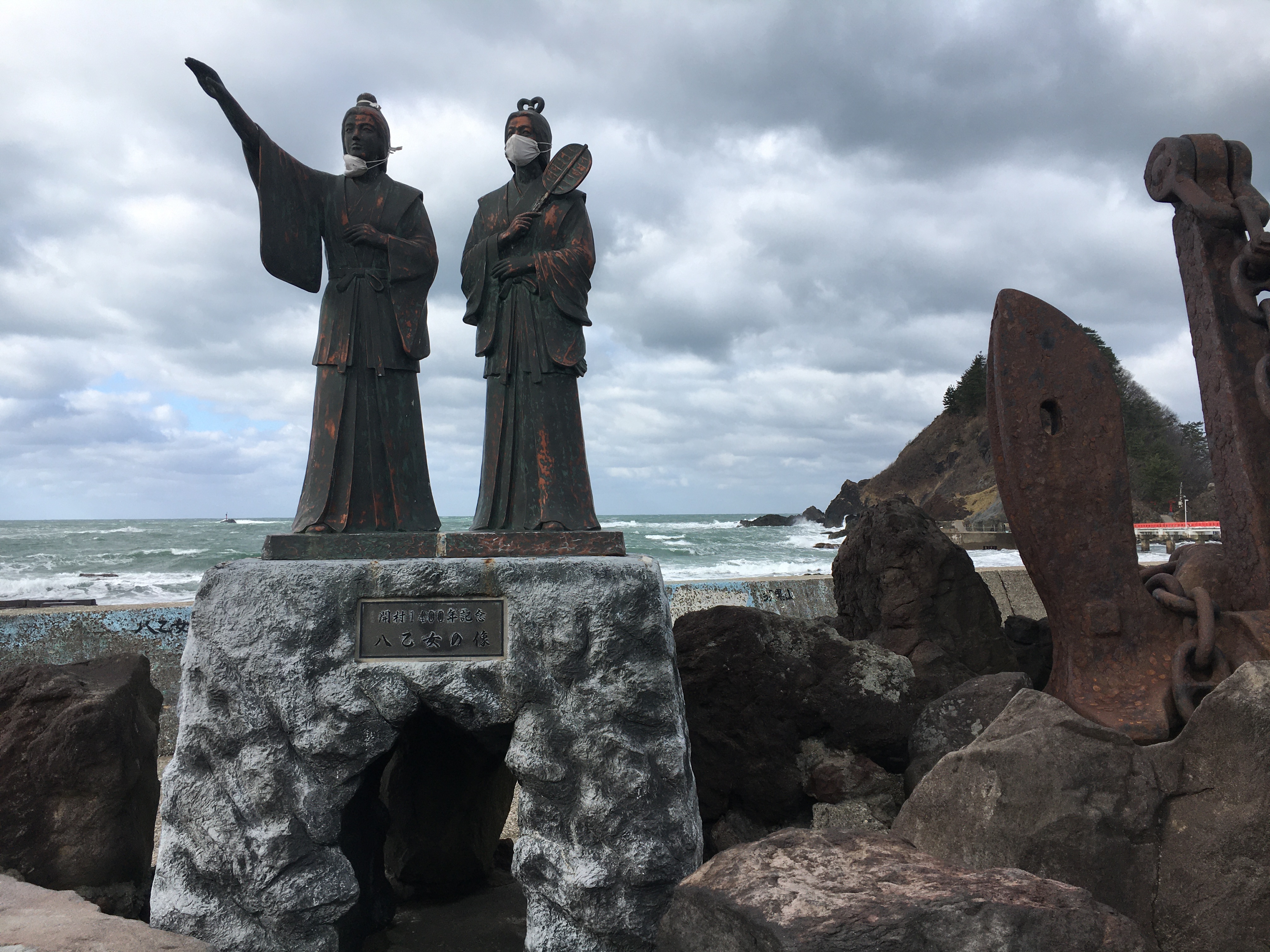 During our last trip up North we drove into Yamagata prefecture and were following the coast line. The seaside in this part of the country looks rather rocky and rough with some occasional sand beaches, allowing for some settlements and providing space for some smaller fishing ports.

At one side we came across this statue of two women, which commemorates the open of the adjoining village over 1,400 years ago. In front of the beach was a small island called Hakusan-jima, which is connected with the shore by a small red bridge. On tip of the island's hill, there is a small shrine, Hakusan-jinja, which can be reached after a steep but stimulating climb. 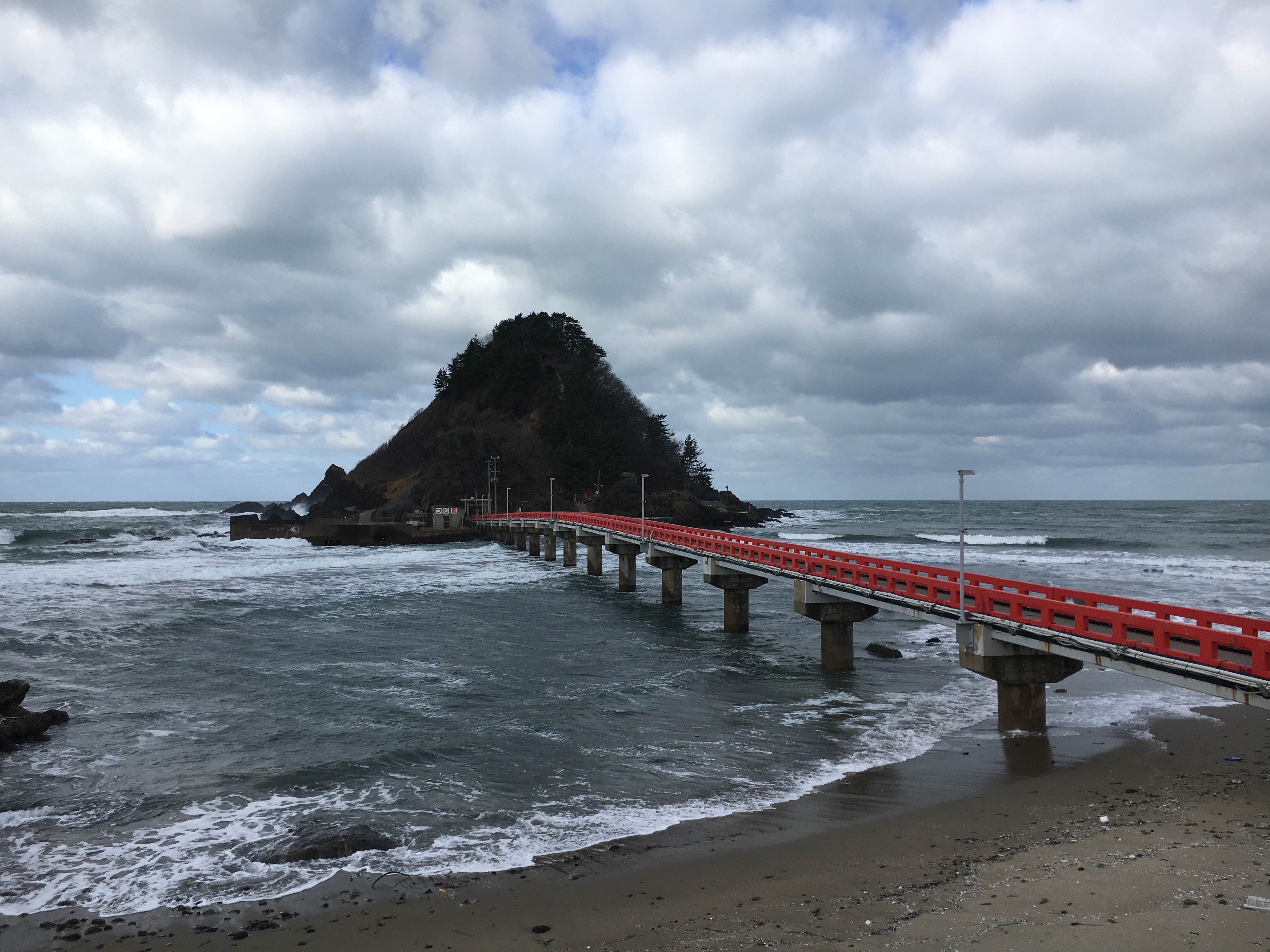 This coastal spot is called Yura and it is said that it was the landing spot of prince Hachiko, the founder of THE DEWA SANZAN, the three sacred mountains of Dewa. There goes an old story and legend how he arrived at this part of Japan and how he began to establish the Dewa Sanzan mountains as a center of ascetic religious beliefs. This mountain area located in the hinterlands of Yamagata prefecture is still a popular pilgrimage site visited by many people.

The story of Prince Hachiko and his landing in Yura

In 592, year 5 of the Sushun era, Emperor Sushun was assassinated by Soga no Umako during a struggle for power. Prince Shotoku urged Prince Hachiko to escape the capital, suggesting "at this rate, your life is in danger, it would be wise for you to head to the sacred mountains of Dewa". Prince Hachiko then set sail from Yura in Tango Province (Kyoto Prefecture). The Prince headed north, and following stops in Fukui, Niigata, and Sado, he arrived here on the coast of Dewa Province with its coastline characterised by beautifully shaped rocks.

Pure of Heart and off to the Gleaming Mountains

Prince Hachiko established a small shrine at the summit of Mt. Haguro, and went on to open Mt. Gassan and Mt. Yudono.

Mt. Haguro (the present): Where our worldly desires are fulfilled

Mt. Gassan (the past): God of night and the afterlife

Mt. Yudono (future): The Sun God of light and rebirth

Prince Hachiko prayed for the people, built many temples, and saved many from disease and disaster. Admired by all walks of life, Prince Hachiko gained the posthumous moniker Prince Nojo "the remover of ills", and to this day Yamabushi train in the mountains, maintaining the faith he introduced. The God of Mt. Haguro was born of the cave of Yaotomeura, and legend has it that the two places are connected by an underground cave. The statues of the two sisters Ehime and Mio that stand here protect the people of Yura, and remind us of the legend of a sacred place that surpasses the time of Yaotomeura.

I just started to dig into this part of the country and its history and legends, but I am kinda hooked now and want to learn and discover much more in the near future. Hopefully some day I can go and discover the Dewa Sanzan mountains myself and go for some nice hiking tour into that sacred area.

And of course, I will take you with me! Catch you soon for some more impressions from the land of the rising sun. 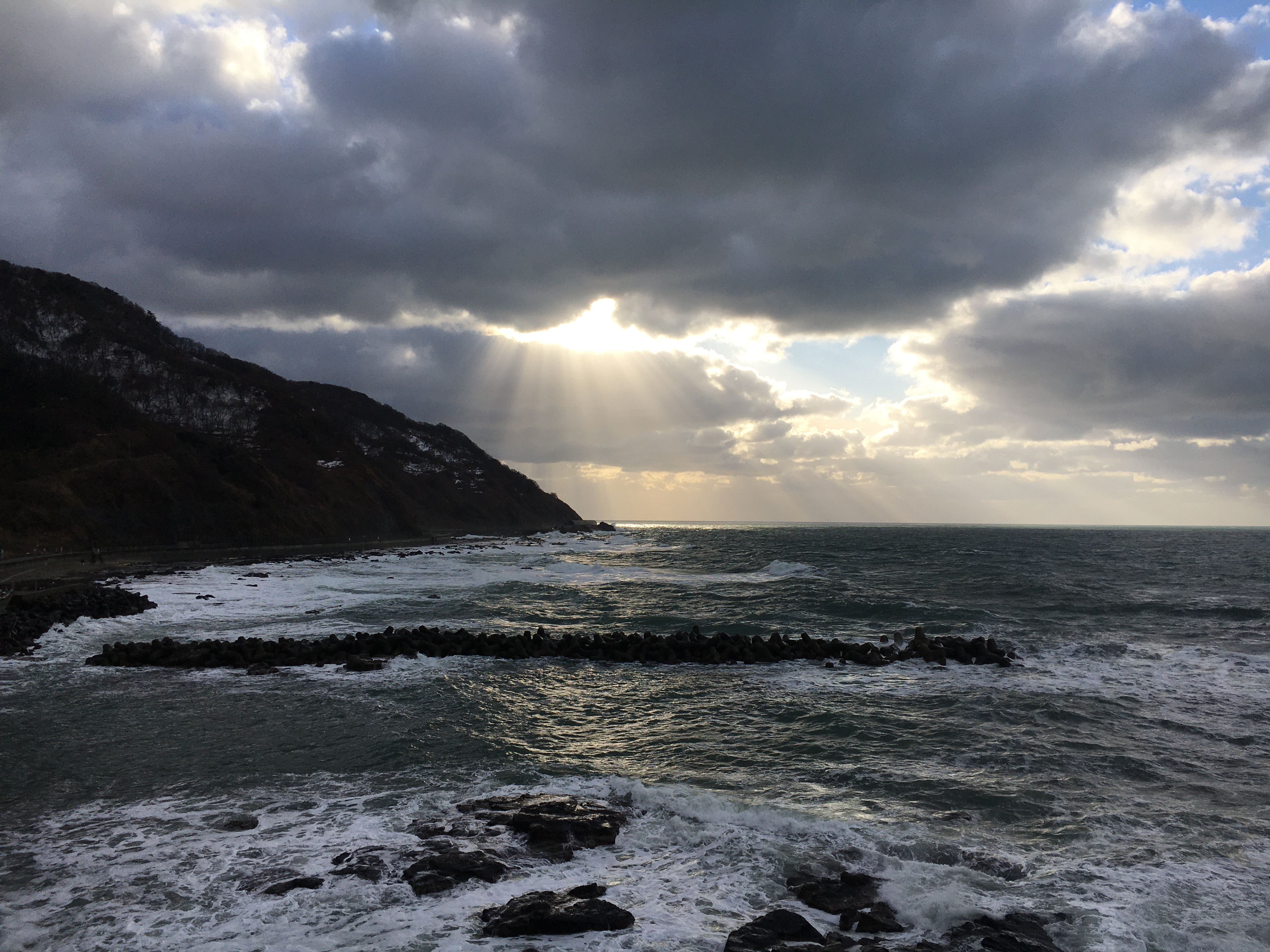