How to improve the quality of your sound & video, and increase your overall production value! The Music community on Hive is more vibrant than ever, we are having newcomers daily, which makes our community even more diverse and interesting! This is great, I can't wait to watch more videos from amazing artists and aspiring musicians!
The most common question I get, at least once per video, is "how do you get such a clean sound". Shout out to @jaydr for raising the question once more. I've thought of it, and decided to give you all a few tips on how to up your game! I won't get too much into the details on the ideal distance between you and the mic, or how not to make sure you don't saturate, instead let's talk about how to get the cleanest, most efficient sound. I am not going to get into investing a real camera, if you can that's great, but it's not even on my priority list right now, so any phone will do the trick. This one is quite open to interpretation, but some people will enjoy the video, and others won't even click on it, and tell you "good job" in the comment section (which is better than nothing!!!), you also have to entertain the people that just want to read something, and for this, it's important to at least write 200 words, even if it's just to talk about your day and what the song means to you. Some of us started to ask a question at the end of the post, to create engagement but it's not always necessary.

That's all for today, let me know if you have any questions! 😉

I'm not a musician but every now and then I do some live recording and editing and these tips are just right for me. Especially the tip for Shotcut. I have an older version of Premiere on one desktop PC but this one I could use on a laptop because it even has a portable version. Thanks again. 👏 😎

Hey @seckorama nice to meet you! Glad I could help!

A warning for Shotcut, it isn't perfect, and 4k footages need to be made into "edit friendly" files, because it's not as effective as Premiere, but it's free!
Cheers!

Thanks for the warning! Well, I usually don't use 4K footages, HD or FHD are enough for me :)

Wow!! These are really great tips not only for musicians but also for future vloggers! Thanks for sharing and I know that many people will appreciate your tips!

I have picked this post on behalf of the @OurPick project and it will be highlighted in the next post!

Niiiiice thanks so much!! Cool community ^^

Excellent advise all around there man, I obviously don't perform songs myself, but I took plenty from your advise around the setting, the front camera vs selfie camera. For anyone starting out your advise, must be golden.. This pic is class by the way, good one for an album cover maybe? "Ed's Greatest Hits" emblazoned across the top there would look cool.. 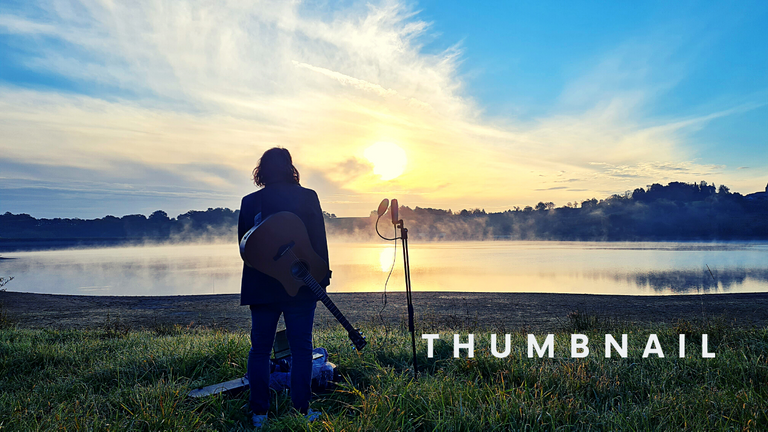 Thanks for the compliment, I like this pic too. I remember very well that morning, I actually got sick, because it's wet everywhere, my socks were wet and started almost crystalizing and freezing, at least it felt like it hahha.

Oooooo never nice to get properly cold like that 🥶 Still, at least you got this sweet photo out of it 👌

I quite agree with the Album cover idea :).

Now I wonder if he has a team or he has robots obeying orders around him ..lol.

@edprivat you re simply a genius.

Hahaha a team of robots? I dreamt of that once! That's a good question, I don't know if I would cooperate with robots. Thanks for your comment brother, and your spirit!

I know this is a great article but I'm packing and cleaning to go. Might not be able to connect as much for awhile. Just know that I'll be back and I support you friend🙏🤗 Bisous à ta femme et tes bouts de choux😘

Oh my.
It feels as if I just attended a class and its you Prof. @edprivat dishing out just what I needed.
This is a masterclass content.

I appreciate it, and will keep it for my growth.

I need to read this a few more times and begin to apply necessary changes myself. I have no questions.

That's wonderful, let me know if there is any questions, no problem!

Nice tips. Even though they are specific to music and performance, a lot of them apply to regular posts as well. It's interesting reading about what goes into your work as well. Clearly there's a lot of thought given to the posts and you can see that.

Thanks my brother, yeah this one was in the backburner for a while, and started a draft accumulating ideas! Glad I can help the cause hahah, hopefully it increases everyone's games, mine included lol

I'm a huge fan of making music at home and the beauty of this is that you can sound profesional without breaking your bank account, and there are interesting and affordable gears you can get.

I bought the fifine 669B mic a year ago under $30 and this sounds amazing. I also use audacity, it's simple, it's fancy, powerful and open source 😎

I bought the fifine 669B mic a year ago under $30 and this sounds amazing. I also use audacity, it's simple, it's fancy, powerful and open source 😎

100 % agreed! Those super cardioid mics are just so sensitive, they could hear a fly buzzing around!

Are you on Linux by any chance 😄?

Yeah I use Linux very often or should I say GNU/Linux xd I the past I use a lot Debían for my work, also Ubuntu, but most recently I'm using Linux mint. I'm trying to learn LMMS (Linux multimedia studio ) btw xd

My first is also audacity. Thanks for this informative blog. This is what I need to start covering songs.

Niiiice! What song are you going to cover first? Tag me when you do!

I have several in mind. That's for sure.. Thanks for the support

Hey Alejandro how are you? Thanks so much!!!!

It is a very well elaborated post and it is just the necessary and useful format for those who want to make quality musical content.

Thank you so much, I hope that you got something out of it!!! Take care Jim!

This is gold!
And you know what? I have been asking this question everywhere on Hive the whole time too. Specially when it comes to your videos 😊
So much appreciation for you doing this for us bringing all those inside information!
You're the best!

HEllo @littlebeatle, great to see you around!

Hope that everything is going well on your side of the world! Big hug!!

All good here Ed! I only need some time to adjust and get settled then I can make a regular schedule to take care of all things I want. Don't want to drop anything I like behind 😊
Still watching your stuff on Youtube and here!

I'll just kick back and watch the master, @edprivat, do his thing!💯