I've been holding back some Splinterlands assets for several months now, watching and waiting as the market prices of cards gradually declines.

But I'm thinking that around now is a good time to start putting in some bids for some summoners, and there's two main reasons for this... 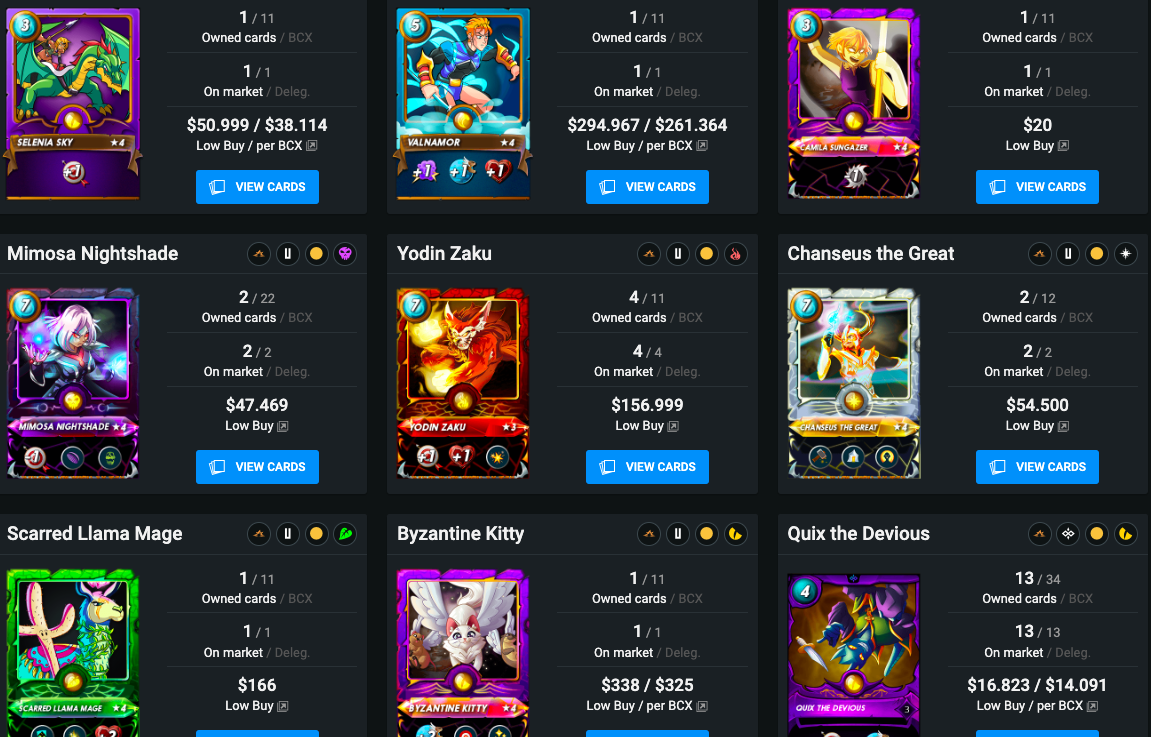 Firstly the team have recently admitted that they printed too many CHAOS packs for the current demand levels and so have started the burn process, meaning there's a definite end date on when all the CHAOS packs are finally gone.

And they've also announced the land reveal is going to happen sometime next year and so there's a possibility we may able to actually start doing something with land before the end of 2023.

Both of these events are likely to increase demand for summoners.

Obviously burning packs = less summoners and summoners are, as far as I am aware at time of writing, going to be essential for getting land to work for you.

And even if LAND isn't useable for months down the line, people are going to be thinking about making sure they've got sufficient summoners, I know I am!

I currently have 33 maxed summoners to work these plots. I did a spreadsheet recently... 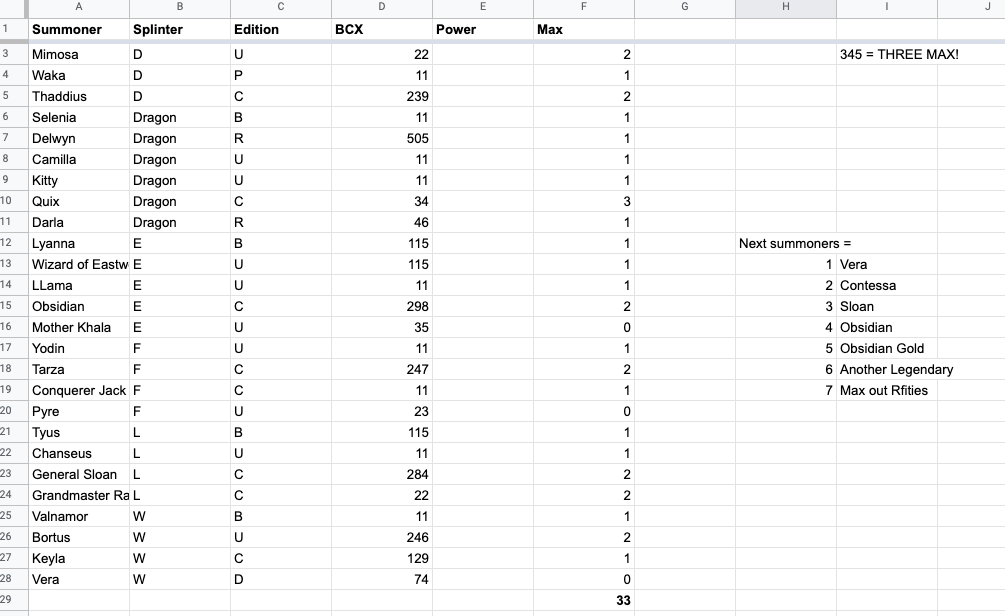 I have a nice spread across all the splinters, so I don't need to worry too much about making up the numbers in any one splinter, I just need to make sure future purchases are balanced.

I'm also well on the way to maxing out my 6 Riftwatcher summoners, I'll get there eventually, little by little, so that will give me 39 summoners maxed in total.

And then there's a few cheaper summoners I'm buying more of which aren't that far off being maxed - another 5 I'm on track with so that gives me... 44 maxed summoners that I should have within a couple of months.

NB these are only maxed in potential terms summoners, many of these I've got at L6 or L4 or even L3, so I've actually got well over 100 summoners at L3 and above and around 70 at L6 and above, so I've got 100 plots covered to bring me in something.

I've got 50 covered already at max level, so it might be an idea to keep 50 buy to sell into what's hopefully gonna be a demand frenzy... and then use those funds to build on the 50 I keep.

I'll do this gradually, of course, certainly selling the 10 individual plots I've got is going to help, but I've got the option of selling of a few here and there to fund the ones I keep for a yield going forwards.

And selling into the frenzy might not be a bad idea - you know how these things works - Individual plots could well end up going for $1000 or more, but then easily drop back to $100 a piece as the interest dies off....

But for now I can't see how one can go wrong with accumulating summoners, they are going to be SCARCE.

As to monsters to work the land, I'm pretty sure I've got enough of those to cover at least 50 plots, probably more, I've been stacking legendaries and golds for ages now.

Damn, I didn't you were such a SPL cardlord!

Most of the summoners look great, but unless you are using Sloan just for land, he doesn't have much use in Battles.

Are you thinking of selling your plots before or after you reveal them?

Yeah Sloan is useless but hopefully he'll come into his own with land - I'm probs gonna reveal all of them unless prices go mental beforehand!

I don't have land, but it will be interesting to see what people with tracts & regions do. I think plots will have more value if un-reveal is there is still that RNG factor there, kinda like packs. But once you open it and get like a "common" land, they won't go as for much. Just my thought.

Yeah fair point - and I'm nor usually that lucky wirh the reveals!

Hopefully card staking on land happens sooner in 2023 rather than later. If I had to guess I suspect land staking will be similar to how league battles work. One only being able to stake monsters to the level in which the Summoner we have staked to said land. Personally I have only six plots so if I decide to work them, cards won't be an issue for me.

That's what I'm working on - Max levels only if you have maxed summonerz - I think there was an original plan to make CP a factor too.

Same thoughts! I just don't understand what the other players are waiting for? Perhaps when the prices will fly to the ceiling...
!invest_vote

I guesss people are just fatigued!

I've been buying those cheap Sloans and Tarsas'.. I hope that will pay off down the road!

I've been doing the same I think they should be decent vests!

I don’t have much of a deck (now only a bit more than $1k after the recent 30%+ price drop) and own no Land but I do think that some of the cheap summoners like Sloan might be a decent investment prior to a Land craze.

It has been a bit punishing watching the drop for sure - summoners though are probs the best thing to pick up!

so youre not thinking the end of year chaos legion sale might bring prices even lower?

Prices could go lower but the bottom's a process and that window is opening for me very soon!

The danger for this, is if the game is not expanding the player base and lands make summoners even more expensive for new players with cost of entry now pushed up even higher we may end up losing players and it will not be healthy.

What we may end up is less value among less people.

But people can go crazy for this kind of LAND stuff, at least in the short term, it's just a matter of being bold enough to capitalise on it at the right time!

I am still trying to grasp what the lands offer. Is it potions to help with the battles and potions are consumable? If so, does it reduce net earnings because we end up spending more each battle?

What’s your plan for the other 50?

I think that's the idea - produce stuff for use in battle, and yes it would make playing more expensive I guess.

The other 50 I don't know, sell them, at the right time of course!