I’m in a financial situation now where IF I can just get my mortgage in the UK paid off, then I can pretty much just live off that income, if I could have it to spend rather than having to use it to pay the mortgage off.

Admittedly living off this small rental income would be marginal and I’d have to make some downward adjustments and kick-in with the off-grid no-money stylee a bit harder, but it’s possible.

Oh and this means I have to stay in Portugal, I couldn’t go back to the UK, rent my Portugues properties out and afford to live in the UK, this is only a one-way street!

But that’s all fine, so paying off the UK mortgage is the new goal and I’m giving myself three years, by which point I’ll be 52.... 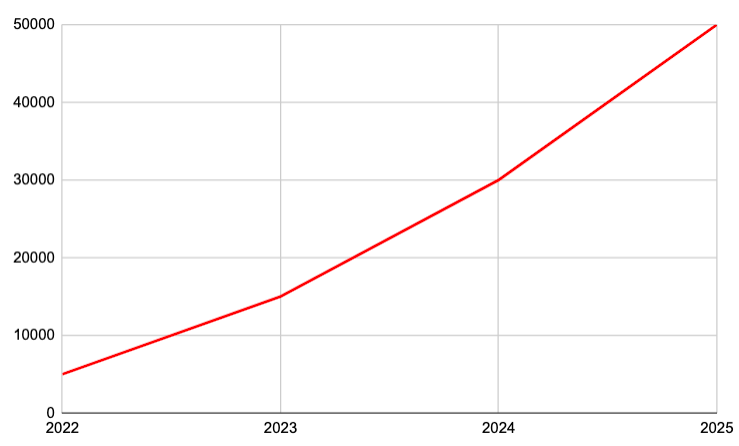 Funnily enough this was my mid-range full-retirement age target when I first set off on this mission in 2014, eight years ago now, and after 4 years semi-retirement I think another three is pretty good going!

Three years is a nice window for me….

I don’t need much to pay the mortgage off, only $50K

And a three year target allows me time to stack that money in order to pay it off, in fact I may over-pay year on year we shall see.

I’m going to go for an extended stack plan, stack a smaller amount year one, then increasing years two and three.

So my targets will be…

I am cheating a little bit here as I’ve already got that $5K stacked, although Summer (July and August) is probably going to be tight and I could easily spend that on other Investment items…

And I do like to be ahead of the game!

The next project after paying the mortgage off is a Van conversion - just something I’ve long fancied doing but never done, but I want to spend AT LEAST $15K on a nice van and then at least another $3K on converting it - it’s got to be nice, but that’s for later.

Well I could sell my house in Penamacor, that should net me $20K.

I could take a small loan out and pay back over 5 years, the interest would probably be similar to what’s left on the mortgage.

I could just WAIT for another 6 months, 12 months, whatever… if it’s a matter of a few thousand dollars….

Time to get stacking!

Good luck with your goal.

Nice goal, and it sounds reasonable as long as you are comfortable with the cut backs you mention!

Best of luck, first step is a dream, then a goal and then a plan, sounds like you are close!

Yeah I am quite happy being a tightwad!

Sounds like you are on a good path to achieve the goal buddy! :D

Should be, depends on whether the price takes a dip TBH.

Ye true. I hope your dividends are good if they market drop :p

Nice planing out there...All the best on your way to archiving the goal.

Good luck my friend! May your plans come through!

That is good to hear!
!invest_vote

The ability to fully retire sounds really nice and relaxing, but I wonder if any "real" (and that includes you because I recognize your avatar and name) Hive users can ever fully retire.

We are just a bunch of HIVE lovers. We would probably take all that extra time and crypto and start new projects.

What do you think? I see your numbers, but can you see yourself really stopping working on this awesome blockchain?

I am just having fun here. I really hope you reach those numbers and find even more ways to get to where we are all going.

Or want to be going.

Oh I think I mean from the FIAT world, I don't really see Hive as work, it's more of a compulsion!

This is very nice having your roadmap to paying off your mortgage and retiring in 3 years time. I wish you goodluck and hope it all goes according to plan.

Crikey that is long term thinking, I take it 52 is a way off then?!?

I will try to reach 150K HP in next 5-6 year and it will be mid forties for me.
Plan is to get HBD when hive get some more $ value so that I will get more HBD per Hive, till then increase HIVE t priority to target goal.

That’s quite the goal, but very reachable! You will get there!

Congrats, you are very close!

Smashing - and you'd still have other bits and bobs coming in, wouldn't you? I think you might also get another cheap(er) mortgage deal when this one ends ... I got letter about three months before the end of my deal, offering me a new one for a further couple of years.

Oh my income is OK besides the mortgage, TBH buying property in Portugal wiped out my ability to pay off the UK mortgage, so I'm just resetting now.

I could sell everything here and pay it off now of course, but where's the fun in that.

I think you're only allowed a mortgage in the UK if yer UK resident? Hence I won't be able to remortgage, the new company would want proof of address which I can't supply!

Ah, I didn't know that about UK mortgages requiring you to be a UK resident. My new mortgage deal came from the same mortgage provider - a proper old-fashioned building society. It's rather sweet, I also had my first mortgage with them.

I think you do, I need to double check, good old building societies, are they competitive?

Extremely, both the best deal available and excellent member care - because of course you become a member and not a customer.

Getting rid of the mortgage is a nice goal. We may achieve that soon too and it will make a big difference. I've no idea where crypto will go in the next decade, but having more leeway will mean we don't have to worry too much. I hope you achieve your goal. You will get there earlier than I have.

Whenever you get there it will be wonderful, it's why I so keen to get it done, one of those life milestones!

It sounds like a very good plan and as you wrote it, it also sounds attainable. Maybe as of tomorrow I'll think about a similar plan, but with more scaled-down targets that might be more for me

You just have to adjust it to whatever can be manageable, it has to be manageable, with the ability to make progress most weeks or months, then it's doable!

I tend to under-target, it's less stressful that way!

Just get to a point you're happy and sustainable, then live your comfortable dream :)

Yeah the mortgage has really helped be accumulated wealth TBH but it's time to kill this particular one.

With the regular repayments it's six years until it's done anyway, so this should be an easy goal!

The theory is that 'really' most of that target is going to spent on something nice instead - like a Van and then a holiday, I just have to get there first!

You got this! It's a goal of mine as well to allow crypto to be self sustainable and live off it while also compounding everything. I figure if I can make it happen during this so called bear market then when things take off I'm going to be sitting really well!

I know you got this keep it up and keep the dream living.

Ah but I'm not relying on Crypto... that's only ever planned to be a supplemental income - icing on the cake, it's too unstable for me to use it as anything else.

That's why I want the mortgage paid off - it's 'real world' income from the rent then, whatever real is?

It's so close and so doable!