8 million reasons to NOT increase UK Pensions by 10%!

The UK Chancellor recently announced that the return of the treble lock policy for UK pensions.

The Treble Lock guarantees that UK Pensions rise by the highest of the increase in inflation from last September, earnings growth or 2.5%. 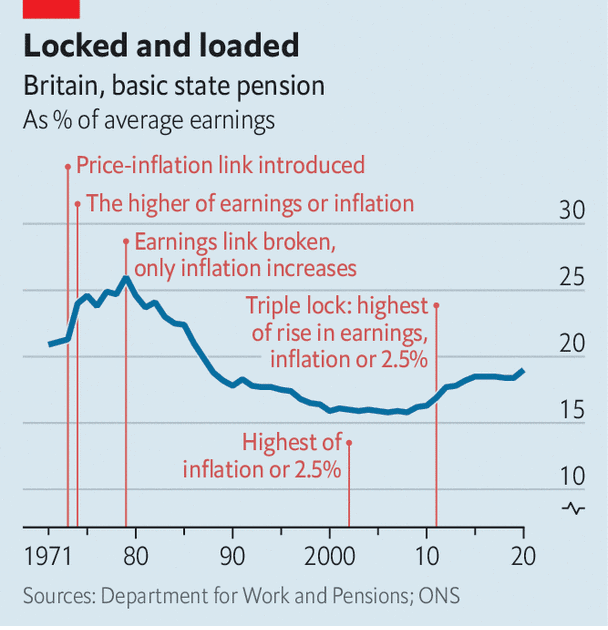 The Treble Lock had been put on hold temporarily during The Pandemic but now it's back and because inflation is currently at around 10%, that's how much the UK State Pension increases by next year.

The argument is that 20% of Pensioners live in relative poverty and it is these that will struggle most to pay for the rapidly increasing food and energy prices.

I mean helping out the poor elderly is absolutely fair enough - no doubt many of these people worked in crap jobs for most of their lives and were unable to save, or many of them will be women who were unable to generate wealth during their lifetimes due to having lived through a more patriarchal age.

HOWEVER, many pensioners are NOT poor, many are very wealthy, and EVERYONE over the age of 65 - that's over 10 million people are now getting a 10% increase in their pension.

8 million of them don't need it!

The Middle Aged have to Pay for This...

Working families are the ones who are going to have to shoulder this burden of increased expense - the proportion of working families in relative poverty is basically the same as that of pensioners - meaning there are just as many (proportionally) working families who can't afford to both eat and heat their houses now.

OK maybe private sector wages will increase to offset the rising cost of living, but public sector workers are subject to a way below inflation increase - showing that the government is happy to distribute money away from the ordinary middle class workers to the probably wealthier middle class pensioners.

And you know what's coming...

It's going to be very difficult for the government to CUT pensions, the best they can do is lower the rate of increase - but the faster they increase NOW compared to wages, the more of a burden this puts on the middle aged - and we are getting older...

The dependency ratio is increasing - there are more old people to workers - and OK the government has moved the pension age back to 68, but that is years off...

This kind of move - rapidly increasing the pensions payouts in the context of squeezed tax revenue - that says to me there's going to be a pushing back of the retirement age sometime VERY soon rather than in a couple of decades time which is the case now.

So if you're British and you're approaching your 50s like I am, don't expect to be claiming your pension at 67 - it will most likely be 70.

This system isn't sustainable, after all.

Pretty rude if you ask me as that is not exactly fair for all of us. This is why having a private pension is advisable. Lets hope Crypto becomes our savior and we don't need to rely on a 70 plus age for pension.

I guess it's another win for sustainable crypto models - people hedging into it as more of them wake up to how unsustainable this is!

Britain is at breaking point - Brexit and all!

Well we have literally fallen apart here as this is not sustainable and are looking to move. Weighing up the options and seeing someone tomorrow night about a role he needs in the Netherlands.

I think you are right and that has already happened: In my forties, when thinking about pensions became more of a reality (I couldn't imagine getting old before then, so impossible to imagine what sort of income I might need), my retirement age was 62.5 years. At some stage, and very close to when I reached 62.5 years, it changed to 66 years. I wasn't happy, nor were the large group of women who lost something like £30k in pension contributions (having paid national insurance contributions for 46 years, at least I didn't fall into that group). I would also add the group of people who paid additional contributions during their working lives in order to receive an enhanced pension, who were then told that that scheme had been abolished and they would be receiving the same pension as everyone else.

It's a while since I checked the figures but I think the number of pensioners living in relative poverty is greater than a straight 20% and the challenge there is the greater demands that impoverished people approaching later life make on health and social services, so withdrawing money in one place (pensions) will contribute to greater poverty-related costs elsewhere (health and social care). While I agree with you about who is carrying the burden (together with the burden of increased taxation to fund social care), I don't think the issue is about pensions: it is about how wealth is distributed in this country and about how we create a more equal and cohesive society. That would be in the interests of the vast majority, but not in the interests of the minority population - not primarily pensioners - who cream off the majority share of the wealth of this country.

I agree it's more complex - neoliberalism has a lot to answer for - and the corporate state - the government just making it easy for the rich to skim off public services.

It's all coming to a head. Finally!

One has to wonder whether Johnson isn't just a patsie - it's 4 decades of neoliberalism coming to fruition right now, but we're all focussing on his lack of morality. I'm sure he's just taking one for the team.

Yes, I would rather the focus is on neoliberalism and New Public Management which are being used to dismantle the public sphere - public space, assets and voice as well as public services.

It is interesting that a large number of moral issues are coming to the fore - Roe V Wade being the outstanding example - at a time when the neoliberal project is collapsing. We're being played.