mistakili (73)in LeoFinance • 9 months ago (edited) One fundamental problem that exists in crypto is a decentralized platform for direct fiat to crypto exchange, essentially Bitcoin, as it is the most widely adopted and secure cryptocurrency in the world. For crypto to achieve worldwide adoption and high levels of sovereignty, there needs to be a fully decentralized exchange that facilitates the exchange of fiat to Bitcoin and vice versa.

The current fiat on/off ramp solutions are through centralized exchanges and P2P systems, but due to their centralized nature, they are subject to jurisdictional laws that pose as a threat to stifle their usage in the face of a total clamp down on crypto. For example, Binance P2P system is one of the most used P2P systems available, but due to jurisdictional laws some parts in United States can’t access Binance, now imagine this happening to Nigeria or India and other parts of the world.

Other popular P2P platforms are Local Bitcoins, Paxful, etc but they all come with their centralized problems and different levels of ID requirements that restrict the usage of the platform to only people with government issued ID’s. For this problem to be solved, there will need to be a fully decentralized exchange where people will be able to trade fiat to crypto without restrictions.

The exchange will be globally accessible and as such will have a basket of fiat currency’s. However, it may seem simple in concept, but it is not as simple as it sounds, if we take a cue from the existing systems in the space, it means people will provide liquidity in fiat currencies against Bitcoin, this is something that has never been done before. 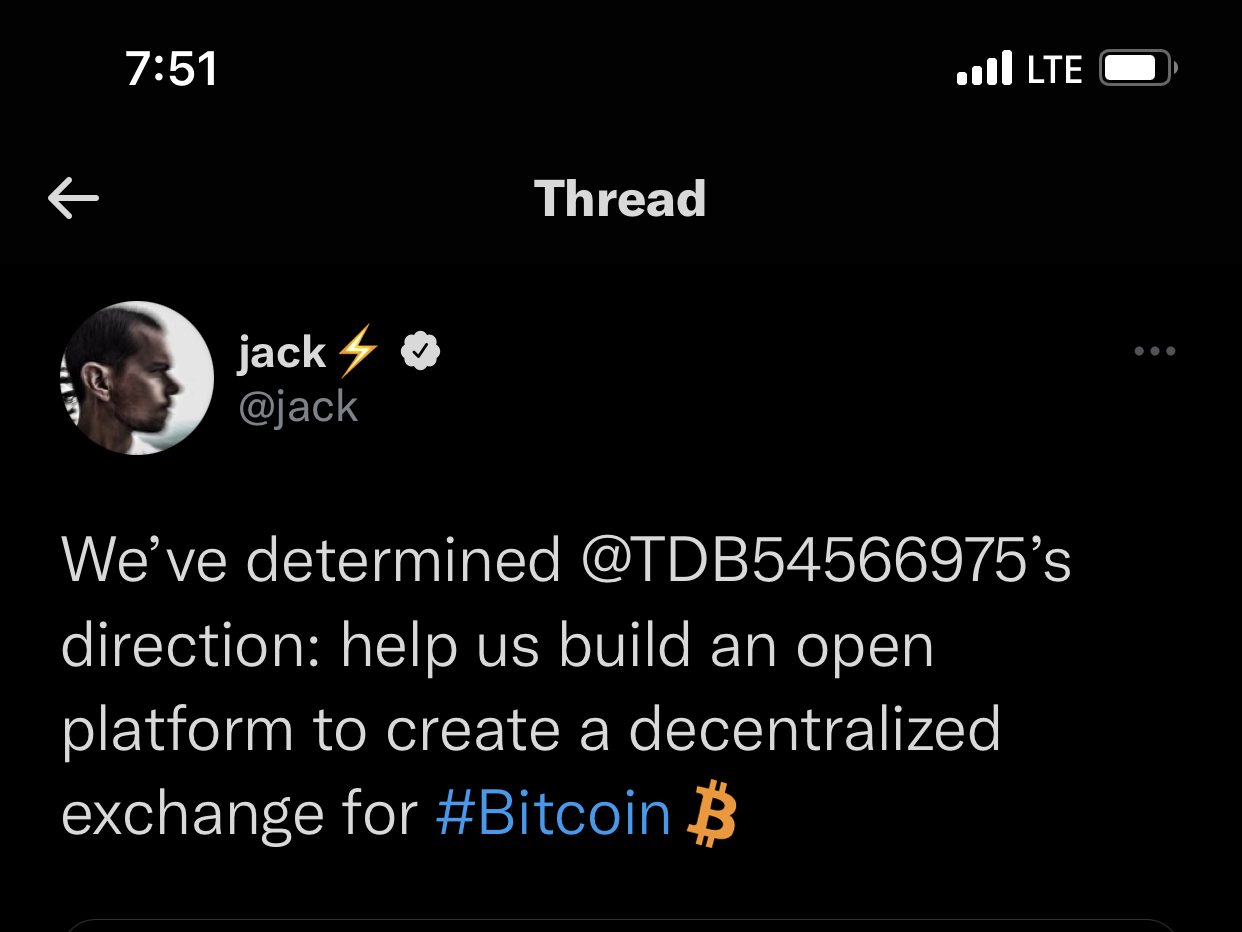 source
Nevertheless, it is not impossible to do. This is the new project Jack Dorsey stated that he’s venturing into through his tweet last night, he’s called this project @TBD54566975.

This is the problem we’re going to solve: make it easy to fund a non-custodial wallet anywhere in the world through a platform to build on- and off-ramps into Bitcoin. You can think about this as a decentralize exchange for fiat.
Source

It does sound like DeFi in a way, but with fiat in the mix. The team working on this are looking to collaborate with other existing protocols and they plan to ensure that the platform is open sourced, permissionless and developed in public. Sounds cool doesn’t it!

If this is successful, it will take Bitcoin and essentially cryptocurrencys to higher levels of sovereignty. I’m not a huge fan of Jack based on his actions with Twitter, but this seems like a step in the right direction. What do you guys think?

Give crypto a decentralized on and off ramp crypto and it is what I always wish for.
I think this cool!

I know right! We need this solution in crypto more than anything else. With it, anyone from anywhere in the world can have access to buying and selling Bitcoin with whatever fiat currency they hold. Hopefully it is successful, it will be one of the best things to happen to crypto