leofinance (75)in LeoFinance • 4 months ago 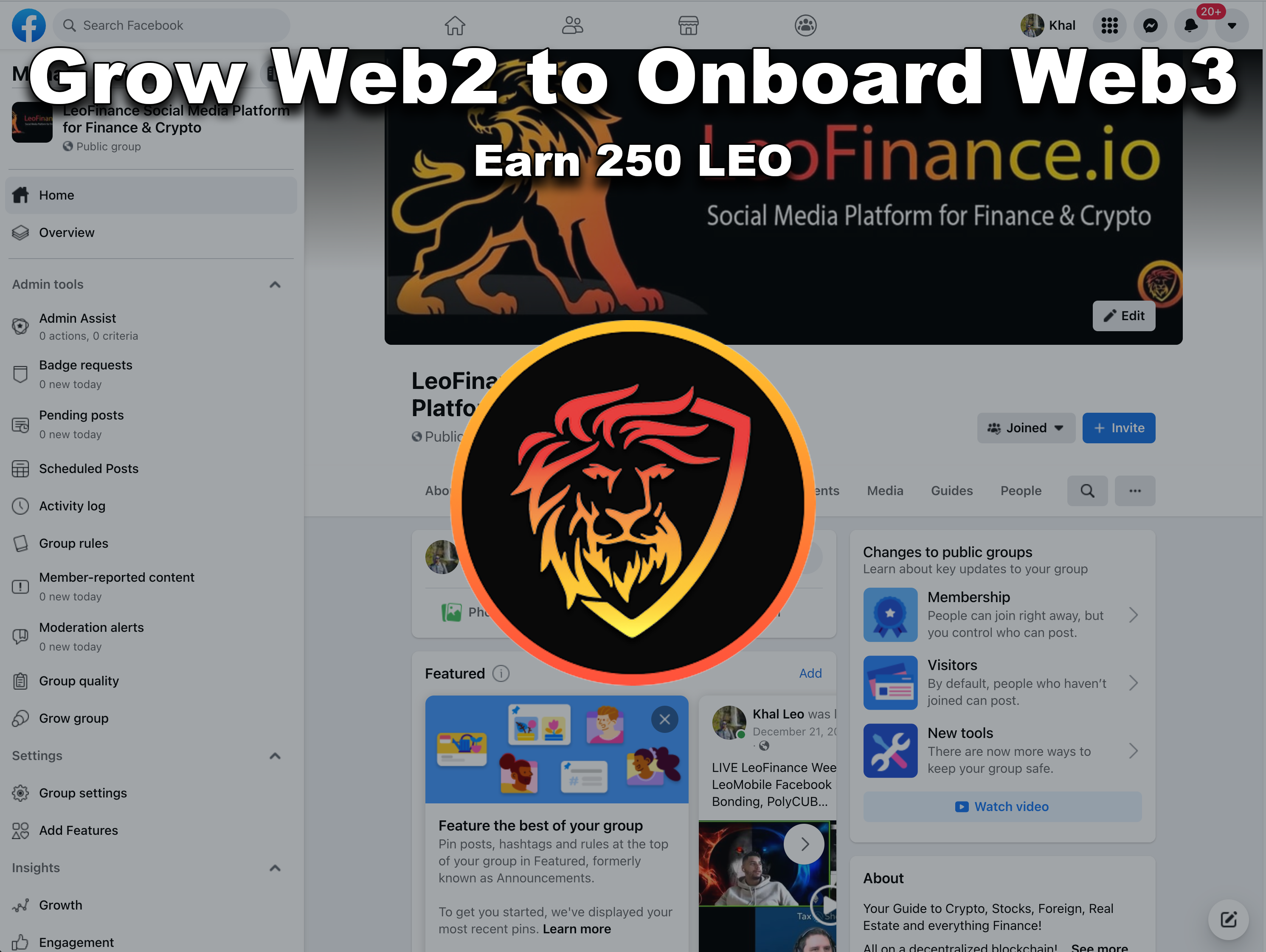 LeoFinance has been expanding our marketing operations going into the new year. Some major things you may have seen lately are the new @leofinance.io Tik Tok account, @leoalpha gaining traction, LeoPedia head of development being hired, clips on YouTube, FB Livestreaming our weekly AMAs and more!

With all of these developments on the marketing front, our aim is simple:

Fulfill our mission statement of expanding the width and depth of the LeoFinance Web3 community.

Our aim is to onboard new users to LeoFinance and keep our existing userbase engaged and excited about the future. The LeoFinance Whitebook release is imminent and we'll see that take the whole community by storm as we lay out the vision for our community in the months and years to come.

Thanks to Gualter (@gualteramarelo) and Mitch (@scaredycatguide), we now have a LeoFinance Facebook Group.

So far, a few people have been posting in the group and we've been livestreaming our weekly AMA shows to it. The group is at 89 members as of this post - that is, with little marketing so far.

Our goal is to grow this group on Facebook and most importantly: spread the content and awareness about our Web3 community over on Web2.

How You Can Participate

We chatted with Gualter - who has built his business and following largely on Facebook Groups - to find out how we can best utilize FB Groups to grow LeoFinance.io.

He's given us a lot of amazing suggestions and it's incredible to dream up the possibilities of how we can leverage this new outlet to grow our platform.

Growing our Facebook Group can be done in a lot of ways, in this post, we'll explore what is and isn't a good way to use the LeoFinance FB Group. We hope to see the Lion Army out in full force on our FB Group to help our expansion and onboarding.

3). Copy / Pasta some of your latest LeoFinance.io Post into the field. I like to do a few paragraphs to give enough of the post to be interesting but not so much that the full post is completely copied over: 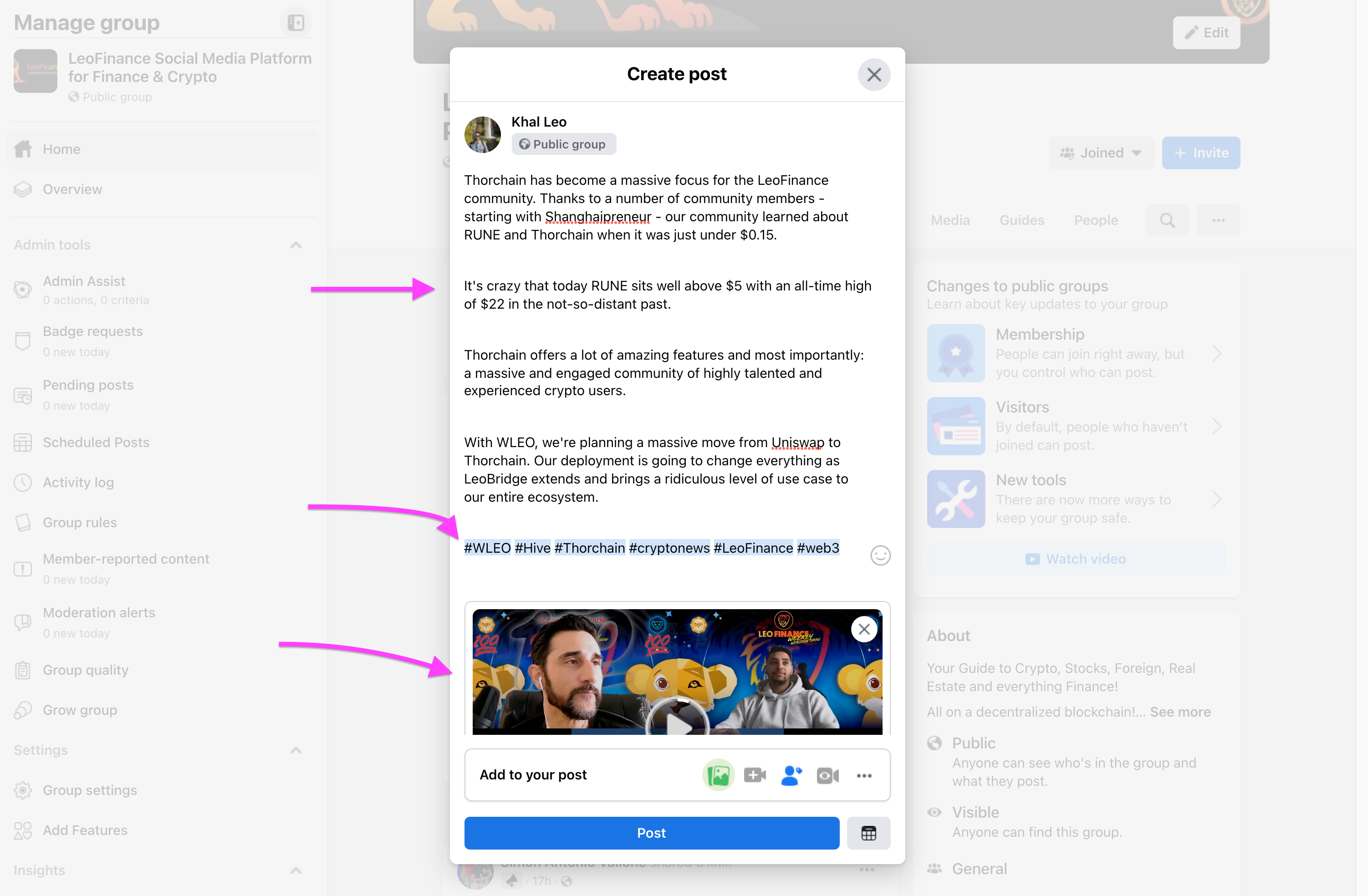 Add some tags below your content and an image or video to accompany the text.

I added a video here but taking your featured image from your LeoFinance.io post will work just as well!

Note: I didn't add a link back to the https://leofinance.io original post that this was copy / pasta'd from.

Gualter has mentioned that FB does not like external links being shoved in this type of content. Remember that we are trying to cater to the algorithms and get this content to show in the feeds of other FB Users. To get shared regularly and be found as generally good content to a wider Web3 / Potential Crypto user audience.

Gualter has also said that as another community member, you can comment below someone else's post with a link back to the original leofinance.io post. Saying, "hey I found your post on LeoFinance diving deeper into this subject interesting... Link" (for example).

Other Ways You Can Help Grow the LeoFinance FB Group

This is social media! To grow it, get social!

Our goal is simple: build Web2 to onboard to Web3.

A few community members have been designated to keep an eye out on the LeoFinance Facebook Group. They'll be taking notes and watching out to see who is engaging consistently on LeoFinance's FB Group.

A few times per month, we'll give out LEO bounties to engaged community members who are regularly and actively participating in the LeoFinance FB Group.

We believe initiatives like this are paramount to accomplishing the LeoFinance Mission Statement:

Grow the width and depth of the LeoFinance Web3 Community.

Join the Facebook Group in the Next 7 Days and Earn 250 LEO! 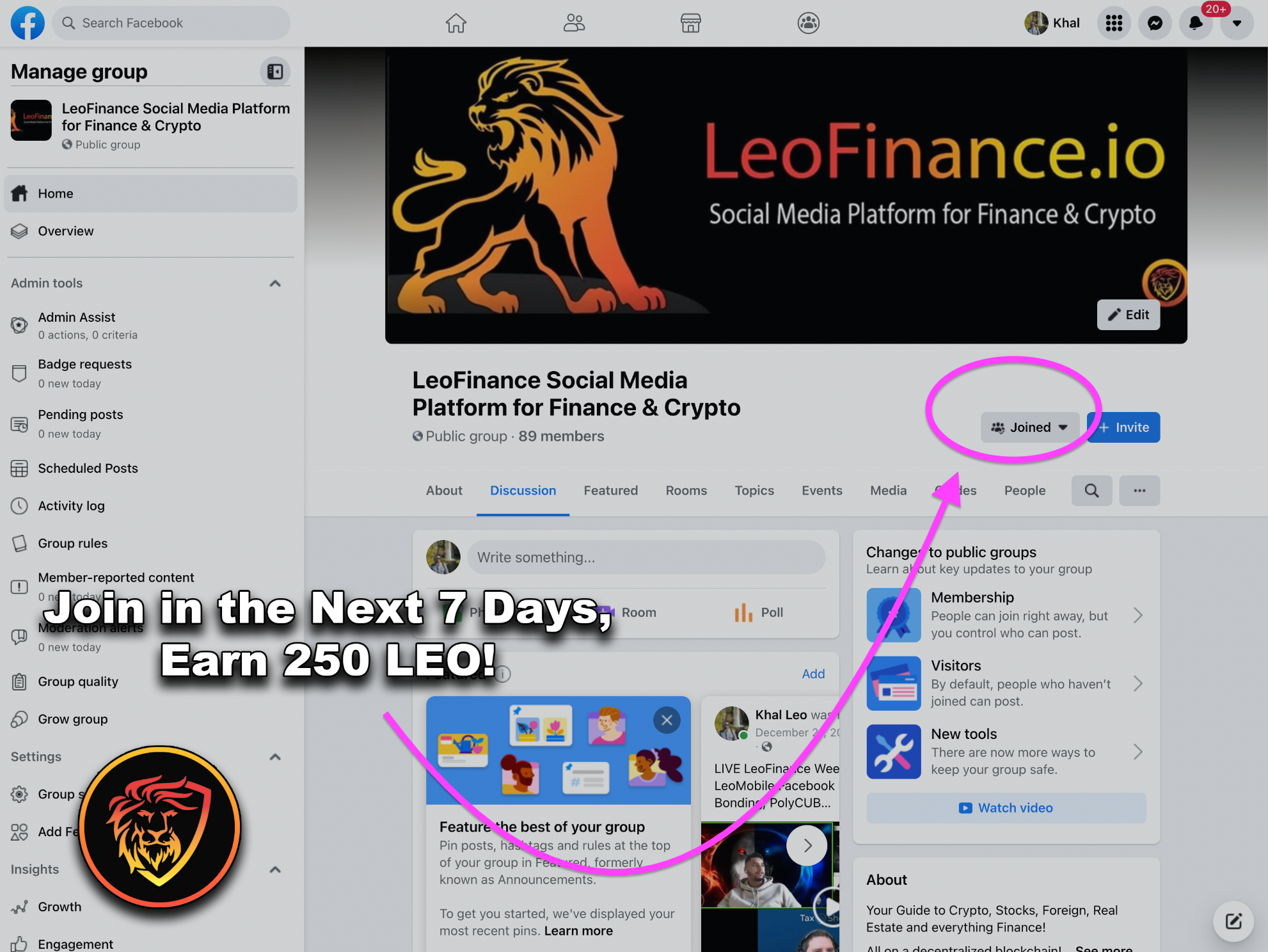 To kick things off, we'll be giving away 250 LEO to one lucky winner who joins the Facebook Group in the next 7 days (when this post reaches payout).

We'll put every new user who joins into a virtual hat and pull one name out to distribute 250 LEO to them.

Expansion is the name of the game. LeoFinance has expanded so rapidly in 2021 and now into 2022 and I'm really excited to see what we can accomplish.

One of our foremost goals in 2022 is to expand the LeoFinance Community. Any initiatives we can undertake to make that happen will be considered and many (most) will be deployed if we believe they can serve that purpose!

Get out there and participate!

No Private Keys to download (right off the bat) and no fuss. Just an easy access point to Web3!

Great to see how you guys are turning to different social media platforms for marketing yourself.

I hope this pays off well :)

@leofinance this is an awesome initiative and the NEW FB login feature is going to make onboarding new members significantly easier!

FB has the largest set of eyeballs on it and the average user is dying to learn more about crypto! The above steps are ideal for gaining traction and have helped me to build a following of 8k followers on FB just by giving the algorithm what it wants and by reaching out to people who would likely be interested.

Real comments and real conversations go a long way on Facebook and since we have the most articles written out of any other community on Hive, I know the LeoFinance community is primed to take over Facebook using this group as a launchpad to double our current users!

I am aiming to see 20,000 users on LeoFinance by the end of the year and Sharing this group with other people on FB is the way to do it! "Real comments and real conversations go a long way on Facebook and since we have the most articles written out of any other community on Hive, I know the LeoFinance community is primed to take over Facebook using this group as a launchpad to double our current users!"

Love this and I think we have one of the most engaged and excited userbase in the entire space. I'm excited to see what our community can make of this type of outreach via Facebook and other platforms.

I agree, 20,000 MAUs by end of year is a great target. Seems like a crazy leap from current numbers (~750 MAUs) but exponential network effect will take hold faster than people think.

Let's make this happen, together 💪🏽

I am aiming to see 20,000 users on LeoFinance by the end of the year

Its really possible and I appreciate your aim @gualteramarelo I'll try my best to invite more friends to join. Will contribute as much I can. Thanks

Great to see all the marketing been done. We sure need the visibility right now. Heading to the Facebook group right away

I'm sure this is work

Aha, we all hope for that !

Indeed, the future is bright for $LEO.

I hope to be here when we get to that valuation

Market is an important tools in every organization and using one of the biggest platform in the world to do that is great. Initiative and a very good way to move the community forward

Fulfill our mission statement of expanding the width and depth of the LeoFinance Web3 community.

It's cool to see LeoFinance getting social 🥳

Kudos to the Leo finance teams as a whole because this expansion make the users Be educated more about the crypto and the coins that Leo finance introduce to the community. I will like to be the person that will be getting the Facebook prizes 250 Leo is not a joke

Marketing leofinance to the world through Facebook is a great initiative and ideas.... Nice one to the team for making the project achieve its aim

Fish where the fish are.

LeoFinance has been expanding our marketing operations going into the new year.

This is excellent. From twitter, Tik Tok and now Facebook, Leo is making great Roar, keep it up guys. Kudos to Marketing Team. 😊👍 !PIZZA

$0.00
Reply
[-]
poshtoken (74) 4 months ago
The rewards earned on this comment will go directly to the person sharing the post on Twitter as long as they are registered with @poshtoken. Sign up at https://hiveposh.com.
$0.00
Reply
[-]
codingdefined (71) 4 months ago

That's great, would continue to use it as soon as possible.

The whole world needs to know Leofinance and Hive, what a beautiful way to use web 2 to onboard people onto web 3

This is another nice move. Leofinance is showing great consistency and the future is clearer. Kudos to the working team!

just joined. I'll hang around in there.

Great initiative Leofinance team, I believe in you that one day you will rock like Splinterlands. This will really build and grow the Hive ecosystem. I recommend you to run Facebook ads that will attract more users from web 2.0.

Yes! This is great. Keep up the good work. Getting people into the ecosystem is the hard part. Once they see how much is going on here, they'll want to stay.

Let the game being and the outreach on Facebook boost this ecosystem. New channels or boosting existing ones to streamline them is a way to gain more traction.

It's great to see the Leo empire expanding! I'm not the biggest FB fan... I use it as little as possible, to be honest, though I do maintain my account just for family connections. I can't say I'll be the most active member, but I'll join the FB group just to be there.

But my feelings about FB aside, it is great to reach out there. That is where the normal people are; if we can pull even a small percentage of them over here, that would be fantastic!

Golden opportunity by LeoFinance how I can miss it. Greetings, myself ShoHana SaNah from Facebook. I'll follow regular activities of the group please count me one of your regular member.
Thank you so much for the kind invitation 💕 I love LeoFinance!!!

Joined ! I hope that will bring a lot of people on Hive !
!PIZZA

I am now the 140th member of LeoFinance Facebook Group.

Is LEO token getting listed on Pancakeswap anytime soon?

Wow!
Nice to see Leofinance expanding onto Facebook. Group joined and already engaging. I hope we get to onboard new users through this initiative

Very nice initiative before we reach a point where there is no need to incetivize the Facebook group.

I might just join TikTok to follow leofinance there as it seems it is getting traction. You see what you make me do 😂

Ready to learn more tips to onboard more Web2 peeps to Web3.

I just joined the fb group. am new to all tbis investment stuff, having just been blogging on steemit/hive until now.

Going UP and UP!🔥