Book Review: Free To Choose by Milton and Rose Friedman 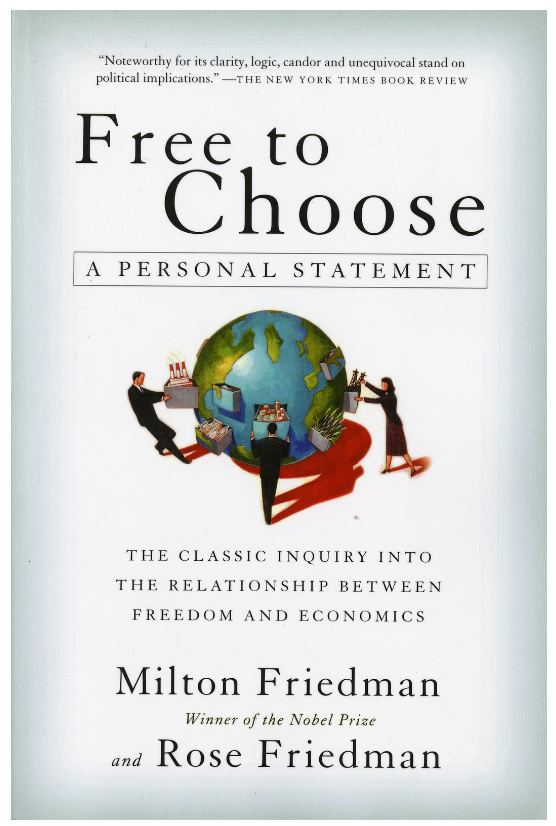 Milton Friedman was a renowned Nobel Prize winning neoclassical economist who rejected the notion of Keynesian economics. He belongs on my Mount Rushmore of economists along with the likes of F.A. Hayek and Thomas Sowell. The original edition was printed in 1980, with the later and final edition that I found at the thrift store dating back to 1990.

In his book he discusses many subjects, and most are particularly relevant today. These include the tyranny of central planning, the drive for equality of outcome instead of equality of opportunity, the perverse incentives of our public school system, the consumer and worker protection rackets, the theft that is inflation, and the false dichotomy of inflation versus unemployment. While the examples he gives are dated, many of them are mild compared to modern day. In that way this book is somewhat prophetic regarding these subjects.

While we may argue back and forth about whether or not markets should be unregulated or 100% free, I believe the pendulum has swung way too far in the direction of centralized control and over-regulation. Friedman believed this was the case in 1990. I can only imagine what he would say with all that's going on now. Our economy is a slow-motion train wreck, and with half the globe seeking to escape the petro- and euro-dollar, how could the situation ever possibly improve?

In his final chapter titled 'The Tide Is Turning' he has a small section labeled 'Sound Money' where he states:

It is neither feasible or desirable to restore a gold- or silver-coin standard, but we do need a commitment to sound money. The best arrangement currently would be to require the monetary authorities to keep the percentage rate of growth of the monetary base within a fixed range.

We all know the percentage rate of growth of the money supply will continue to grow unabated. Can you imagine if the Friedmans had known about Bitcoin? If they had lived to present day and wrote an updated edition, would they have mentioned Bitcoin? I certainly believe they would have debated it, and F.A. Hayek would certainly have chimed in on the conversation if he were around.

Both the 1980 and 1990 versions were produced as video documentaries, featuring the likes of Arnold Schwarzenegger and Ronald Reagan. Both can be viewed here for free:
https://www.freetochoosenetwork.org/programs/free_to_choose/index_90.php

Despite being so dated, I really enjoyed this book. It provided a bit of economic history and stats prior to the 2008 crisis, and even prior to the dot com bubble. It was fairly easy to skim over the more esoteric pre-1990 economic facts and statistics. As a fan of Friedman, this was an easy $2.99 thrift store purchase.

I remember I was reading that book at university. And I really think everyone should go through at least a summary. Your review made me want to read that book again.

Very cool, thanks for reading!

Milton Friedman should be required reading for every student of history and economics.

This should be recommended for everyone to read because there is definitely a lot to be gaun from the book.

Unemployment is the scourge that plagues the economy for ages. Almost all economists discuss this issue.