jazzhero (64)in LeoFinance • 3 months ago (edited) 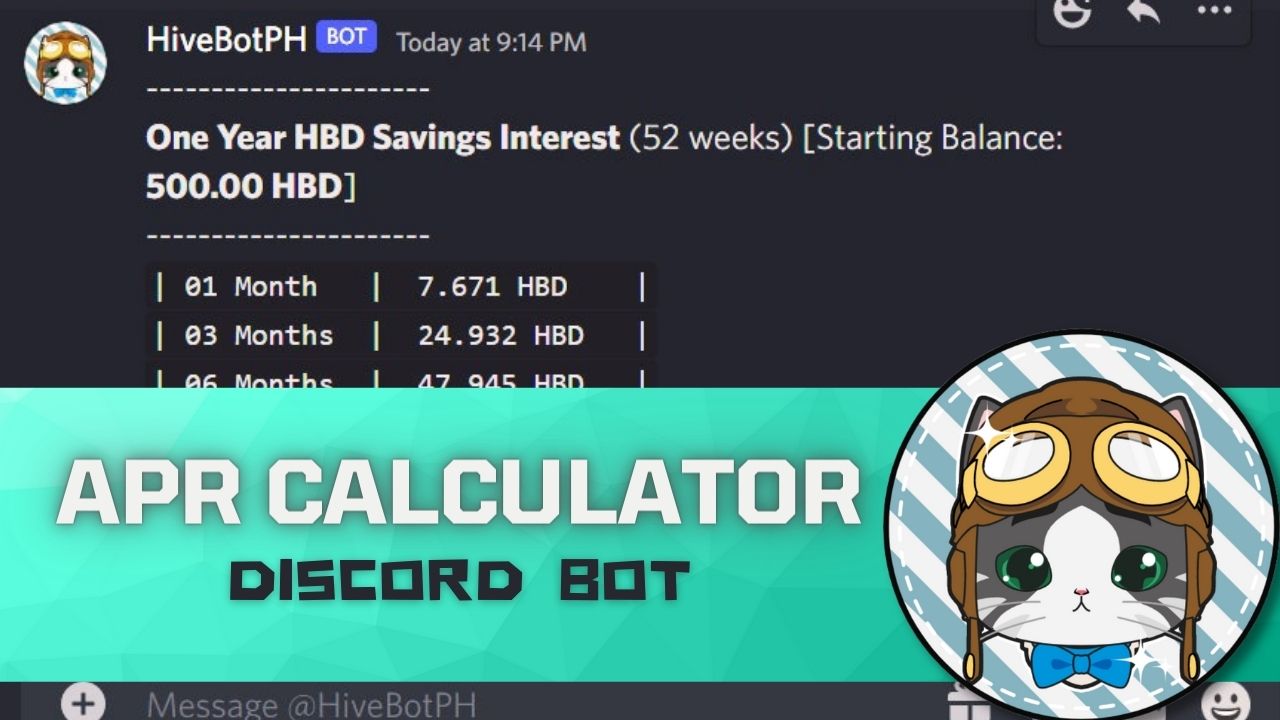 When I first read a random blog post talking about a chance that the HBD savings interest rate would increase to 20%, I thought it was baseless hope.

But a day or two later, it actually happened.


An APR interest rate of 20% is exciting. More so because it's HBD -- a stablecoin backed by the Hive blockchain that's pegged to one US dollar. It's possible to get higher rates from other crypto staking or savings offerings. I joined a few ones with rates even reaching as high as 200+%. However, it's not unusual for those coins to crash in value within weeks. The higher APR didn't really matter.

I don’t have much HBD or Hive on my account, but I keep fussing over my savings and potential earnings. How much more finicky would users with tens of thousands of HBD be?

Getting detailed information is part of making the most out of your earnings game. Though manually calculating APR yields isn’t complex, having it done for you on Discord is infinitely much easier.

It’s not too difficult to code, neither server-resource heavy, so I went ahead and ninja-modified our current community Bot. 😁

The APR Calculator is available to all discord servers that have @hiveph's HivePHBot. It was primarily a curation helper for our small Hive community. But we kept bloating it up with random features. 🤣

The bot has a new function that returns the projected interest earnings for an entire year. To use, type:

Please take note of the spaces in between the parameters.

STARTING_HBD_BALANCE is the initial amount of HBD that you're putting into your Savings. It must be a numeric value.

OPTIONAL_WEEKLY_HBD_TOPUP is an optional input. It tells the bot whether you'd like to consistently increase your savings balance by a certain amount every week. It should also be a numeric value.

Here's a sample command for calculating a year's worth of interest for a Savings account with a 500 HBD balance.

And here's the command if you want to calculate for a 500 HBD starting balance, but with an intention to add at least 5 HBD every week.

A Brief Look into the Calculation Process

I used the simple APR formula:

But I used a week as the smallest unit instead of days to make the calculation faster.

The weekly top-up amount is assumed to be value added by the end of the week. Once added to the primary balance, it is also factored in the APR interest calculation.

I considered including compounded interest earned in the calculation. It implies that whatever amount you profited for the month from your Savings, you re-invest immediately. But I thought the weekly top-up is already a good substitute for it, since it’s a similar compounding effect.

Let me know if you think it's something that needs to be added. I avoided doing it since it felt redundant.

Prior to the interest hike, I was focused on increasing my Hive Power. But now I’m a bit torn. On some days, I favor getting more power, but the yield from Savings is incredibly enticing.

So I ended up with an even split. Similar to how Author rewards are distributed by default — 50% as HP and 50% as HBD, I keep the HP portion as is and put all HBD earnings into Savings. I feel like it’s a good compromise.

To end. Let’s look at the interest calculation for a 500 HBD balance when the rate was 12%. Then compare how much bigger it will be now that the APR is 20%. 🤑 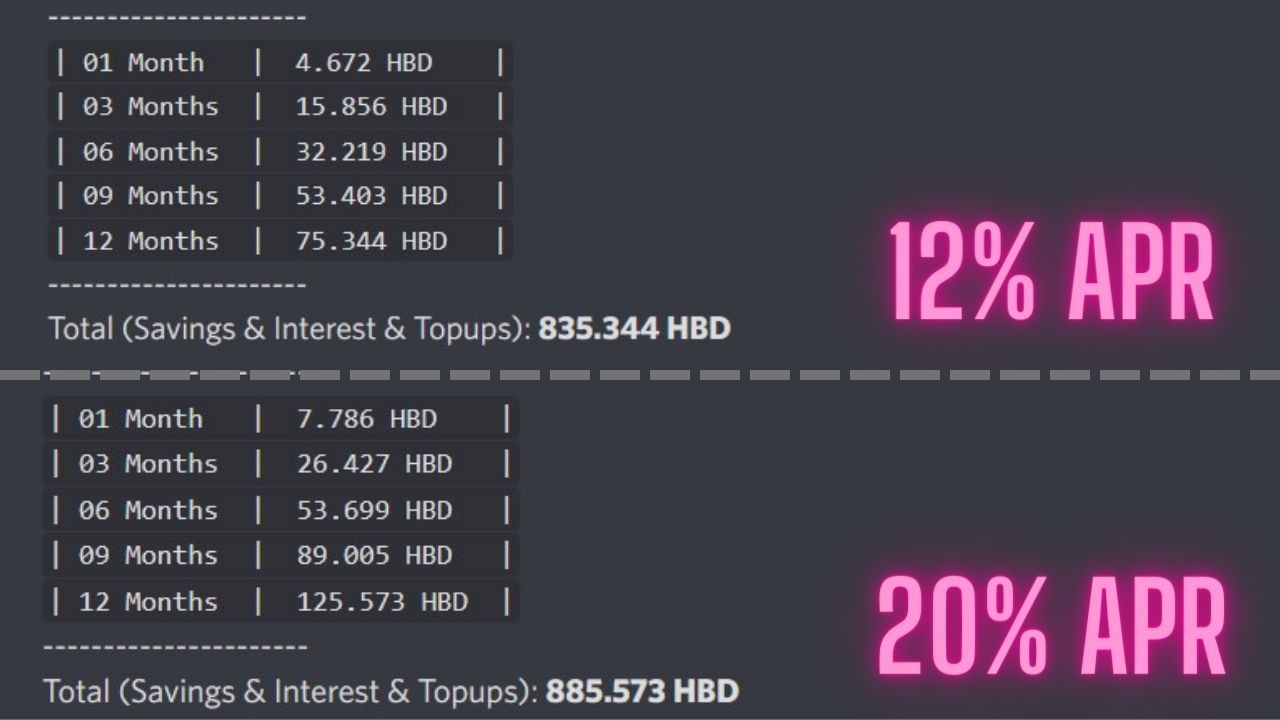 Want to earn while having fun? Join Splinterlands.

Thanks! I was mostly curious about the earning potential for regular top-ups. For consistent bloggers like you, it's a good projection of what you'll get if you place a portion of your HBD post earnings regularly into savings.

Can you add a function where it calculates the returns for investing in others using feelings?

This is very useful! I'd want to show my onboardees how huge 20% is but they don't seem to get it for now hehe This is a big help so they can simulate their earnings. Thank you for this, @jazzhero. Should I just chat the code directly to the bot? The one below? Thanks for the feedback! Yeah, 20% APR is a big benefit. Especially if users would blog consistently and place their earnings into HBD savings. You can estimate that using the top-up option on the bot.

Should I just chat the code directly to the bot?

Yes. Let me know if you encounter any problems. DMs or server messages should work.

It's exciting and more convincing to move HBD to savings once we see how much one's money will grow if one sees the figures. Our money should work for us in the long run. Super thank you for this, @jazzhero! :)

I already shared your post with them! I hope so hehe Enjoy the rest of your day! 😁

$5 HBD a week additional savings makes a big difference at the end of the year!

That's true. A major reason why I made the bot calculator was to know the impact of a weekly 5 or 10 HBD on our Savings APR. It's not a big amount, but it goes a long way when compounded. Thanks for dropping by!

100%. Get those rewards while Hive is fairly high 😁

Should factor in monthly compounding.

Seems it's best to go all out with the calculations. I'll add monthly compounding of interest in the next few days. Thanks for the feedback!

Congratulations @jazzhero! You have completed the following achievement on the Hive blockchain and have been rewarded with new badge(s):