Why Are Communities on Leofinance Useful?

When Hive communities were first introduced, there was quite a big hype around them.

My focus on Hive narrowed over time, and I can't really say how much the smaller Hive communities are used. I believe a good opportunity was missed to add such communities with tokenization support as well. But that meant SMTs in the old plans for the previous blockchain, which never materialized there, and on Hive the second layer smart contract solutions are preferred, to keep the base layer robust and limited in scope.

Whether or not Hive communities are used widely, besides the large tribe-based ones and a few others, is not the purpose of this post.

But let's take the Leofinance interface for example.

Leofinance started out as a Hive-Engine tribe (well, actually on the previous blockchain). That's how the LEO token came to life.

But Leofinance also has a Hive community. Whenever you post using the Leofinance interface, two things happen:

Besides that, depending on the options you select, the post can also go to your personal blog and/or to your Twitter account. But these two are optional. While the tribe and community are not changeable.

If you would use a general interface to post, the Hive community where to post is something you can select. But for Leofinance it doesn't make sense to introduce that option, since they have their own Hive community.

So, a way to segment content on Leofinance based on interests is via the Leofinance communities. Otherwise, as Leofinance grows, putting together content from different areas that are related to the crypto or financial world leads to growing issues in finding the type of content one is interested into.

Now, all it remains is that those Leofinance communities are used. There are 17 of them already.

How to use Leofinance Communities? 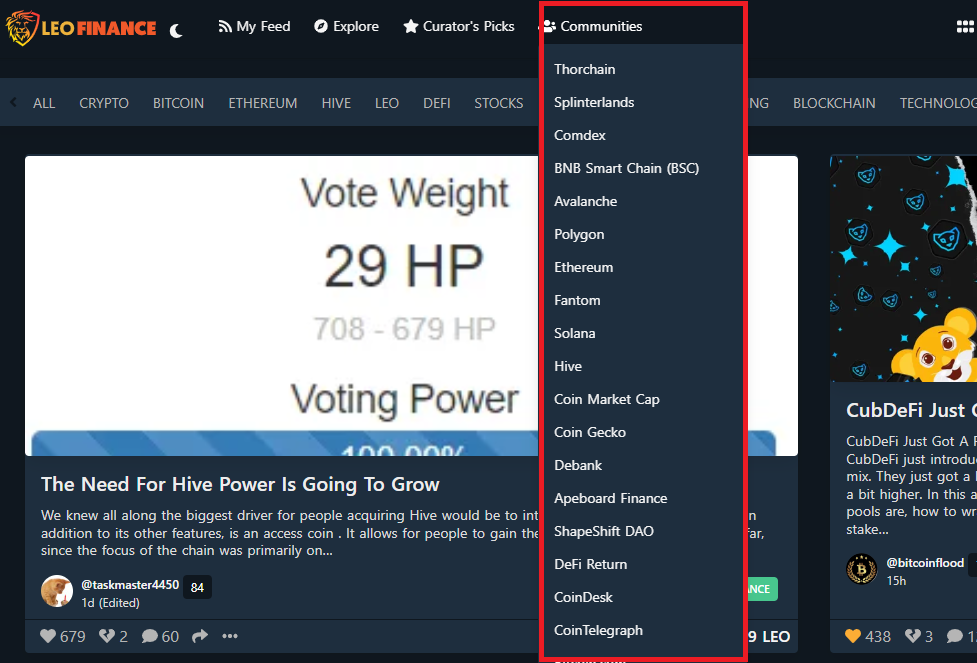 Every community has a header at the top with certain information, including the community moderators, and the posts selected to be in the community after that.

The different structures in HIVE tend to work at cross purposes to each other.

This problem is not unique to LeoFinance. Most of the tribal interfaces reject community tags.

The solution would be to allow the tribes to denote a preferred interface or to encourage the interfaces to tokenize different communities.

BTW: People who want to blog on a given topic are better off developing a unique tag than a community as tags will work with different communities.

I believe (some) communities will be tokenized when more 2nd layer solutions are created like the one Blocktrades said they'll work on after HAF and HF26.

BTW: People who want to blog on a given topic are better off developing a unique tag than a community as tags will work with different communities.

This is good to know. I honestly never even noticed the communities tab on Leofinance. Thanks for sharing this, @gadrian!
!CTP
!ALIVE

Yeah, they need to grow a little more to become useful, especially the less active ones.

Yes, that's true. Unfortunately I am guilty of joining too many groups and can't keep up with being active in them. It's a challenge. Have a great day, @gadrian! 😀

Enjoy your Sunday as well!

I did, thank you, @gadrian! Happy Monday and 1st of the new month! 😀

I consider the communities a scaling move as well, picture having more users each with specific crypto topics they are interested in, while not being interested in other topics.

This would make room for posts such as manifestation techniques, LOA, and other finance related posts that aren't really seen here on LEO.

Sorry for the reply with leoglossary. I was getting ready to post something there and forgot to switch accounts.

unpopular opinion penguin: they are not
:P

Task will definitely not like that I posted not one, but three comments with leoglossary before I realized I was on the wrong account. I blame leofinance for not showing the comment right away. :)

I think that version one is a good test run and that over time we will get a more finished version that will be very successful.

Yes, for sure improvements can be made. But I like Khal's strategy to launch things in a basic form to receive feedback and bug reports sooner.

For me, communities are like subreddits and they simply empower more specialized content. The crypto and finance domain is too vast and focusing on one thread of it that some might more be interested in than others is a feature that comes handly in the ocean of information.

I agree. While technically they are not, it's important how the user sees the information because it's difficult to find what you are interested in in a sea of unrelated niches, inside crypto or financial.

Yep, they added a lot more Leofinance communities, but not many of them are active.

When they get up and running, I wonder how the SPK network is going to change tokenised communities on Hive.

That's definitely an alternative that will be interesting to follow. As I believe there will be the 2nd layer platform Blocktrades team will build, which probably will go well hand in hand with Hive communities (just speculating here).

...but now one or more moderators for that Leofinance community need to upvote your post, to be displayed on that community page.

Now that's something I had no idea about, there's so much info coming my way every day that sometimes my brain tells me: Hey, I might be running out of space soon, you better use some filters or I'll start forgetting things faster and sooner than you expect it!
Not sure how much sense this makes to you but I'm writing this at 6am so I have an excuse. :))

It makes sense and it happens to all of us, I believe! I haven't followed my own advice of using Leofinance community tags so far, even when the post was a good fit. I simply forgot. I heard Khal that maybe they'll find a way for moderators to add posts to communities in the future even if they don't have the right tags.

I think that the communities being different makes the Hive more interesting. If they were all the same, it would get boring.

Sure, that's the point to have different communities.

Hey @gadrian, here is a little bit of BEER from @yintercept for you. Enjoy it!

I think it's a nice feature but I don't really visit it much. I just don't have the time outside of visiting my own feed. Have you been using it?

Only a few times. But right now, outside Splinterlands, Hive, and maybe with indulgence one or two more, they aren't used much.