Today I've made some bigger moves involving HIVE and SWAP.HIVE (bought some with another volatile top coin), but when I checked out TribalDex I saw I already had quite a significant amount of SWAP.HIVE there.

At first, I checked if someone had sent those to me by mistake. It wouldn't be the first time. But no, there were no transactions today for SWAP.HIVE.

That could only mean some of my sell orders on the market hit. But which orders could be large enough, if they hit?

There was only one candidate because I don't have too many sell orders for different tokens at the moment. And that was LISTNERDS. I do unstake a tiny portion of my earnings every once in a while, and that goes to the market as a sell order after 10 weeks, waiting, waiting...

As a top holder of LISTNERDS, it was quite discouraging to watch the token brought to the ground by increasing sell pressure.

I believe since the token price moved below $1, I only sold at the market price once because I really needed HIVE right then. But I did drag my orders to lower levels as the price crashed, which I regret now because I could have made much more HIVE.

But who knew Raymond from BROfund was waiting for the right opportunity to amass a nice chunk of LISTNERDS quickly, and show support for the project at the same time? 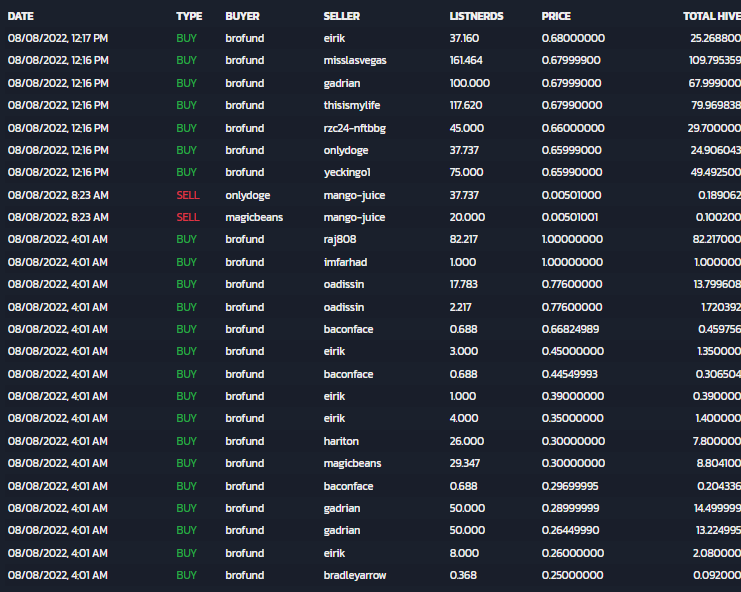 In the end, I am happy with the outcome.

I sold my liquid LISTNERDS, even if I wish some orders would have been left at higher levels. And there are more LISTNERDS in the process of unstaking, some very close to finishing.

If Raymond wanted to, he could've bought all the LISTNERDS offered below the sell wall at 2 HIVE. I'm sure of it. That's not too much HIVE for BROfund. But then, we would have moved from one extreme to another: from lack of buyers to lack of sellers (other than the sell wall).

With all the purchases BROfund made today, it is pretty far from the Top 50 holders yet. Only 2750 LISTNERDS in its wallet, and to be in the Top 50 one needs about 8600 LISTNERDS, currently.

This shows how scarce liquid LISTNERDS tokens really are on the market. If major players want in (and one just did, and he likely needs more), the offer is pretty thin. And yet two days ago there were practically no serious buy orders for the token. Talking about markets being irrational.

That's a nice price pike! With a 10 week power down period, I believe that only few people think of unstaking their tokens. This translates into a very illuid market. One buyer is enough to have a major impact on the price. I was thinking that if there was a liquidity pool for listnerds with swap.hive with rewards, that would be very interesting... The very illiquid listnerds could become interesting because you can stake it on the site but also in the liq pool... I believe with the little liquidity, this would stabilize the price quite well.

I would definitely be one of the liquidity providers for a LISTNERDS-SWAP.HIVE diesel pool.

Right now, once we reach a certain amount of LISTNERDS staked, we practically NEED TO unstake a little bit of LISTNERDS to have some liquidity ongoing in the future (with a 10 weeks delay). A liquidity pool would separate the two elements. Staking is for holding long term. The LP is for liquidity.

I believe it would be an interesting idea for more use cases for the token and at the same time it would bring liquidity to the pair.

I have seen such pumps for other tokens, but when you try and trade them you don't actually get the price of the pump for your tokens. Tribaldex is a bit flawed in this regard.

That's because there is such low liquidity for most tokens, in my opinion. That also creates high spreads sometimes.

The same sentiment here. Last month, I refused to sell LISTNERDS below 1 HIVE. I never expected that the token will go down for weeks below 0.50. When I saw @brofund buying LISTNERDS this morning, I posted a sell order of 45 LISTNERDS at 0.66 and it was immediately executed. With 29 SWAP.HIVE, I was able to purchase a small quantity of DHEDGE, SPS, WORKERBEE, CTP, and CENT.

Yep, I saw your order going through before mine at about the same level. I just keep the HIVE, that's my most problematic goal this year.

In my case, I just unstake a small amount of LISTNERDS every time I reach a round number.

So do they know something we don't when it comes to the future of List Nerds?

I have not been happy with the sell-off lately on my investor side; however, I have taken advantage of the giveaways.

I guess it is a double edge sword.

I saw you on the buy side often these times. If price finds a higher balance, that might've been a very smart move.

That is what I am hoping for, @gadrian
I am hoping that @Brofund is starting a trend.
!CTP

That is so nice. Didn't see that coming but it's good that there had been a positive move on the price.

We rarely see them coming. Otherwise, everyone would move their orders higher. :) I would have done that too.

But unfortunately, the sellers are again persistently dumping the token :(

If BROfund won't aggressively buy again, the price needs to find a balance somewhere. Hopefully, not as low as before. And BROfund wouldn't have much to aggressively buy now, there's still very little liquidity on the market for them to buy up.

You yourself see that in a day they almost lowered it to the old levels.
And there will be more and more liquid LISTNERDS every day.

I look at the sell orders, not at the current price, at least for LISTNERDS. If they don't drop down to the ground again, we are good. I hear there will be some announcements related to Listnerds in the next CTP show (probably on Thursday).

I totally missed it! I am so bummed. Maybe I need to set up some kind of side deal with him... Have they put out a post yet talking about their plans?

I don't think so. But Raymond has been posting on Listnerds (or maybe he stopped, I'm not sure) for months already. And with SPI closing in on Top 20 already, it was just a matter of time before BROfund or another big player jumped in.

Yeah, that is a good point. I have a feeling I won't be in the top 5 for much longer even if I keep at it the way I have been.

I just keep buying and staking ListNerds whenever I can. I have not powered any down or sold any yet. Nor do I intend to.
!CTP
!ALIVE

Way to go, Lisa! That will move you up on that richlist! :)

Thanks, @gadrian! It's fun to finally have passive income.
Have a great day! 😀
!ALIVE
!CTP

Yeah, I had a similar situation today when I was trying to figure out where I got the extra Hive)) I think it's a good idea to leave orders at a tasty price of different second layer tokens to catch punctures, like with ListNerds...
Have a great day!
!CTP

Did you find out where you've got the extra HIVE?

Yep, having sell orders waiting if there's no pressure is a great strategy, unless the price of HIVE goes down significantly, and those HE tokens are repriced in dollar terms (rarely if ever happens).

Yeah!) These were also ListNerds orders that I placed quite a while ago))

...unless the price of HIVE goes down significantly, and those HE tokens are repriced in dollar terms (rarely if ever happens).

I was thinking the same thing. I think these risks will be worth it!)

I wanted to go and do the same on the BRO market, but then I saw the price, way too steady.

On HE, BRO is kind of a blue chip passive income token.

And I have none, this one is next on my list, I need to get me at least a few!

I recall hearing people complain about the price so the people who held out obviously won. Is brofund moving it onto the listnerds platform or are they leaving it on Hive? I expect it to be moved onto the site to get more Listnerds and vote value.

Yesterday it was still on Hive-Engine, and they were not in the Top 50 (considering holdings on Listnerds). I believe their move is for the top.

Nice to see a little peak for ListNerds and that your sell order triggered. Let's hope it will not drop hard again. But there are some rumors that there will be a usability for LN. Maybe the announcement this week will give some details.

Came from ListNerds and voted there!

Thanks! I don't think the sell orders will drop hard before Thursday. But if people are disappointed with the announcements, they might after that. Emotional reactions... On the other hand, if the announcements are great, we might see another pump for LISTNERDS price.

Lots happening with ListNerds right now! Thanks for keeping us updated.

Do you know any details? I mean, if there are some developments coming up I haven't heard of yet.

There will be some announcements on Thursday's CTP call.i don't know what is planned myself except that Blane is working all the time on improvements.

nice! there might be some big announcements, Raymond usually has great info from behind the scenes.

yeah, could be. I understand the BROfund is a supporter of many projects on Hive, so it isn't a surprise that they want to hold ListNerd tokens.

Wow. Congratulations @gadrian You had so much luck✨

Nope, not really luck. I had sell orders standing by. And there were others with orders higher than mine that got executed. I'm glad for them!

That's really good. You seem to be a good trader. I'm a forex enthusiast, I have a strong interest in the digital market. I'll be looking out for your posts.

Thanks! I do profit from swings when I can, but generally, I have a long-term view.

That's really nice
Really nice.
I can't wait to get better in the digital market. I really can't wait.

Lots happening with ListNerds right now! Thanks for keeping us updated.