CubFinance in the Spotlight Again

Surprisingly, I meant CubFinance, not PolyCub, which has captured the spotlight from its BSC brother since its launch.

But today, CubFinance got back into the spotlight. It wasn't even vindictive on the young brother, so it didn't come in hard. :)

If you have no idea what those metaphors are about, here's a hint from Twitter: 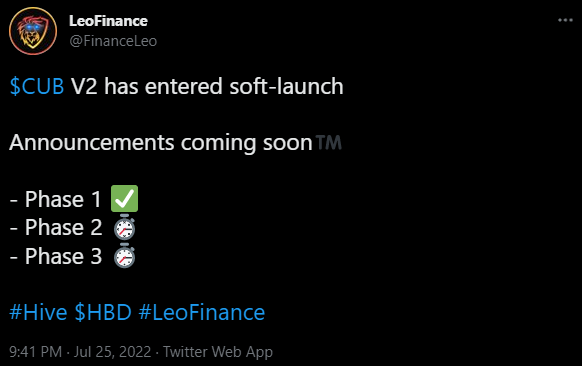 But... if you go to the CubFinance interface you can notice that on the Farms page:

Yep, they are working. I added some liquidity to bHBD-CUB from CUB-BUSD. When I first saw it, the APR was above 1000%, but liquidity in the bHBD-BUSD pool was too thin and the price impact would have been too high. Even when I swapped some BUSD to bHBD, I did it in several transactions to avoid a higher price impact.

If you still have liquid HIVE/HBD on Hive after the recent pump and dump, the best option from the fees perspective would be to wrap it to bHIVE/bHBD on the wLeo.io interface, if any of these farms interest you.

Khal has been saying in the AMAs that pretty much everything built on PolyCub will be integrated back into CubFinance at some point.

From what has already been launched on PolyCub, I suppose we should expect a Protocol-Owned-Liquidity on CubFinance (or an improved one if it already exists) and governance voting (based on all the owned CUB in the kingdom and farms?). The counterparts of xPOLYCUB and vexPOLYCUB don't seem feasible on CubFinance, with an inflationary tokenomics, unless I'm missing something.

The timing for launching bHBD (and bHIVE) pools on BSC couldn't be better, coinciding with this pump and dump. What people need during such moments is liquidity, and liquidity pools are made for that purpose, primarily. Although the argument can be made that malicious actors can use deep liquidity as an attack vector.

I enjoy seeing CubFinance back in action.

To be honest, I don't think it is back in the spotlight yet. Either that or people have difficulties moving funds without a high price impact or fees.

Khal has been saying in the AMAs that pretty much everything built on PolyCub will be integrated back into CubFinance at some point.

From what has already been launched on PolyCub, I suppose we should expect a Protocol-Owned-Liquidity on CubFinance (or an improved one if it already exists)

Or is this feature going to always be buying and burning CUB?

I haven't listened to yesterday's AMA yet, but I heard Khal say in a previous one it'll buy and burn CUB. Just the means of the PoL (i.e. funds) will differ. They've learned some lessons in PolyCub.

So many of your posts, Adrian, show me how much more I have to learn about this blockchain.
I feel like I have learned a lot in the past 7 months, then one of your posts blow me out of the water. LOL.
But that is okay because I like a challenge and being pulled out of my comfort zone.
Keep the quality posts coming.
!CTP

You'd be surprised how many times I feel the same way. There's always something to learn and usually someone to learn from.

The counterparts of xPOLYCUB and vexPOLYCUB don't seem feasible on CubFinance, with an inflationary tokenomics, unless I'm missing something.

Khal mentioned on today's AMA that XCUB will exist on $CUBDEFI. It is quite simple to integrate all he has to do is allocate some of the inflation into the XCUB vault. Regarding VEXCUB I don't know but it seems the logical step after XCUB.

CubDeFi will make a comeback for sure but it will take a while.

Hmm, and what would be the selling point for xCUB? For xPOLYCUB it was "number go up". Will that still work if CUB is produced forever?

A growing cub is a happy cub. Thanks for the update.

Are you in on all the farms or just the ones with the highest apr?

Right now I'm only in pHBD-CUB and considering getting back to CUB-BUSD with the rest of my BUSD. And the rest of my CUB is in the kingdom. Nothing else on CubDefi atm.

Do we have any idea of what will happen in phase 2? I like that they started adding new farms but I am unsure what they plan to do on CUB.

Khal might've mentioned it in yesterday's AMA, after my post, but I haven't listened to it yet.

Thanks for the heads up.
I took 50% of the liquidity from the hbd/usdc pool yesterday.

Took advantage of the high rates.
I'm sure it's gone now but should have made some extra cub.

I took 50% of the liquidity from the hbd/usdc pool yesterday.

I need to play these p&d better. I took advantage of the liquid HBD that I had natively on Hive waiting for a better HIVE price but forgot about my liquidity on PolyCub...

Is there a simple guide on how to get started with cubfinance and related tokens. I constantly feel bamboozled by the options and want to undertstand more about it.

It's pretty complicated for people not used to the defi platforms, I know.

When CubDefi was launched (March 2021?) there were some simpler guides published. The problem is they are out of date now, because CubDefi changed.

I guess its time to go dig up my keys.

I stopped looking at it.

Yep. Many have, but I kept compounding... I hope CUB gets a nice pump, lol.

It got to the point where it was too expensive to compound. Or at least it felt that way.

I didn't do it daily. Once a week or something like that.

I guess its going to be one of those things where we call you "lucky" yet we could have easily done the same thing ourselves.

Thank you for the reminder that this "crypto thing" is very do-able.

Read how this all have started with Toruk