edicted (79)in LeoFinance • 4 months ago 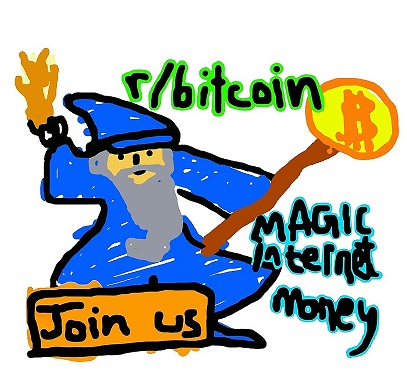 Support was holding strong but 24/h volume kept going up.
This all but guarantees the price will go up within a short period of time.

I was going to write a post to that effect last night but I decided to argue with random people on the Internet instead. Smart use of my time, obviously. So this morning I wake up and see that I was right; price has gone up and volume has dropped 30%. Unfortunately, the price increase was only 4% so it's not nearly as good a spring as I thought it would be. Oh well, maybe next time I see a signal like that I should try to x100 margin trade it with like $100 collateral :D. Turn that 4% into 400%.

People have been talking about Magic Internet Money since before crypto even existed. In the WEB2 climate, this concept of MIM first took the form of advertising revenue. This is like the opposite of the attention economy. Rather than getting paid to pay attention, value was being sucked out of those that were paying attention.

The foundation of the WEB2 business model is that free services get exponentially more users than subscription services. Subs can be thought of as WEB1 in many respects, and it is still a largely valid business model to this day when WEB2 fails to deliver. In fact many websites combine both models, like Twitch, where you can use the platform for free but you can subscribe to individual streamers to support them and get access to 'premium services' on their channel.

When we look at a site like YouTube, everyone could see that the videos with millions of views were worth money, but nobody really knew exactly how much. It took a while for YouTube to figure out how they should pay the content creators. After all, YouTube lost a ton of money during the early days. Overhead cost of bandwidth and cloud storage is not cheap for a full-scale operation.

Now we are in a situation where the magic internet money is crypto. Everyone intimately understands now how data and adverting has value. Back in the day it was not so obvious. Now we are seeing the exact same sentiment with crypto. It's new, grizzled, and complicated. It doesn't make sense to most people. They'll come around eventually.

What is the foundation of WEB3?

All of these corporations that think they are going to make a seamless transition to WEB3... are dumb. They don't understand what is going on here. The products being built today are altruistic and 100% of their value is airdropped to the underlying community. The vast majority of projects don't do this and remain centralized, which is clearly a regulatory attack vector that will be exploited to the fullest.

Corporations don't think on the same wavelength as WEB3.

Imagine being in a board meeting and trying to pitch this idea to your superiors: 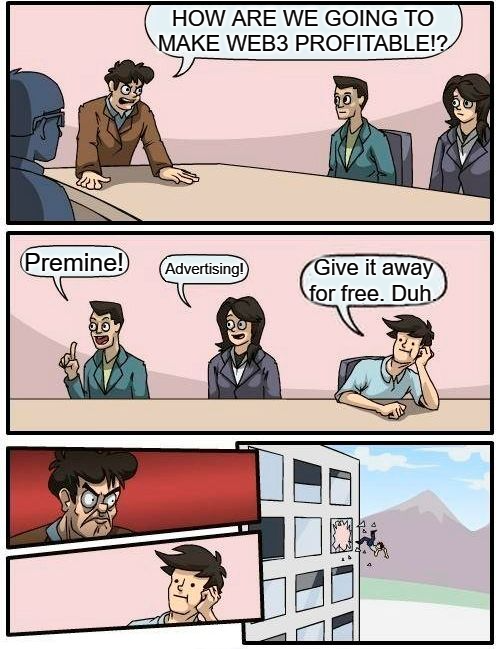 Sorry friend, you just got launched out the building.

The entire premise of crypto and WEB3 is exactly the opposite of everything these corporate vipers have ever known. To assume that they are going to be able to transition to this narrative is downright foolish and naïve.

None of these people are going to realize that the best way to build the most value is to give the product away for free to a decentralized community and give them ownership of the development. The best networks develop and govern themselves. VCs are becoming totally irrelevant. Institutional money is no longer required. We shouldn't want them around. They are toxic parasites that lure us in with a honeypot of riches. 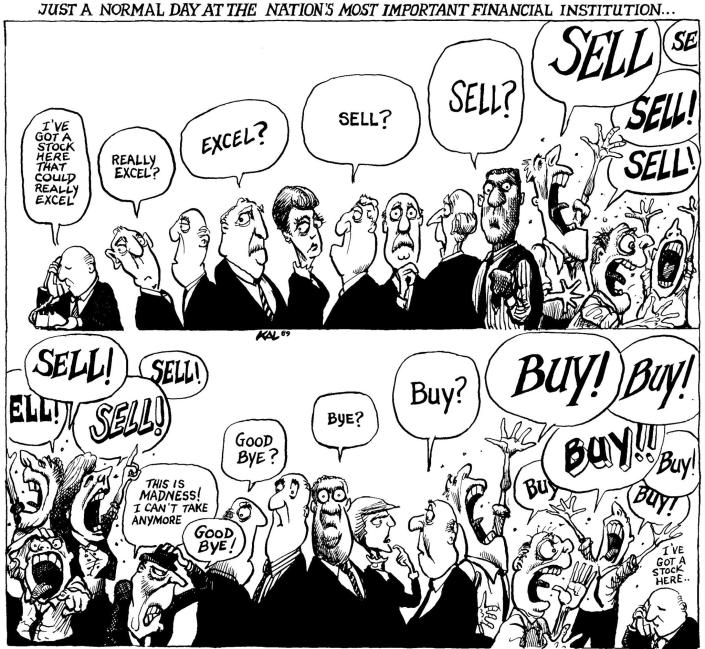 Imagine if Blackrock started buying Hive. What would happen? Everyone would freak out and stop selling. Nobody wants Blackrock to control this network. That would be insane. This is probably how Hive is going to get past the $10 mark. Someone will start buying Hive that Hive doesn't like, therefore Hive must cut off entrance liquidity and make them pay dearly to enter the system. If Blackrock wants to pump our token price to the moon in exchange for relatively little Hive: let them. Worst case scenario we already know what to do if things get truly out of control. But chances are that Hive wouldn't even be powered up, so again, who cares? As long as the VCs avoid tinkering with our governance, there is no conflict.

It wasn't that long ago that Magic Internet Money was used to reference the value being generated on WEB2 platforms in the form of advertising revenue and attention generated thereof. Only when society conquered that business model did crypto come along to throw another money-wrench into the fray.

Crypto is a super complex ecosystem full of scams, and it's very easy for outsiders to view the entire arena as a scam because there is so much garbage out there as far as the eye can see. All we can do is keep our heads down and keep building. The attention economy demands it. We will get their attention, sooner or later. That's a fact.

Imagine if Blackrock started buying Hive. What would happen?

So we talk about Hive being resistant to a takeover because in order to accumulate enough coins to control governance, price would literally go through the roof... and the risk of being forked out by the community you just made rich would always be there anyway.

You say that chances are that HIVE accumulated by the likes of Blackrock wouldn't even be powered up, but the risk of taking that chance is too high so would be viewed as an attack and treated exactly the same as the scenario above.

Where it gets interesting, is what level of ownership by whatever big player, would be viewed as "acceptable" by the community.

Obviously we want fresh money being pumped into the network, but we also don't want to sacrifice distribution.

Where is that balance and how does it get found?

Lol giving things away for free isn't in the agenda of those corporate fossils.

Well magic internet money, will shock the coporations with how much power and belif people will develop as a result of web 3. Soon it will nolonger be about money but what this can do for the people and what they can build for themselves, while on there feet and not begging for mercy from copprates with the money

The scenario of BlackRock buying a large stake in our community is interesting. While we welcome investment, we don’t really want massive investment, and we don’t like change brought in or forced upon us by a large investor powering up their stake and hosting for witnesses. It’s a challenge.

I know we fixed the vector of attack from exchanges, but from large powered up new money voting for witnesses, no protection there. In DPOS stake rules.

So we could be taken over, but why and to what end?
Could Jack Dorsey take us over and vhangeus to Hive Twitter? Would that be bad?

It is simply magical to see how you can multiply money without banks or regularization, in my house we also respect the magic money of the internet.

No kidding. Fact. It sure is very interesting what is happening in the cryptosphere and across our home planet right here among us. What's next @edicted?
@taskmaster4450? We will see what is next. ❤❤

Great use of the defenestration meme.

The scenario of BlackRock buying a large stake in our community is interesting. While we welcome investment, we don’t really want massive investment, and we don’t like change brought in or forced upon us by a large investor powering up their stake and hosting for witnesses.
It’s a challenge.

If Blackrock started buying, would we even know? I have a feeling there is always a bit of lag before we would even know what they are buying. However even 1% of their funds is enough to just pump the prices like crazy. I don't really plan on selling and I hope people stop selling to secure the network.

One thing is also for sure, if the price pump, a lot of people will sell. Let's just hope not too many people would do that.

But if the price go high, I would for sure at least sell a little

It's never wrong to take profits. So feel free to sell and re-position later if you can.

Before doing anything I'll have to see someone about crypto taxes and especially for that kind of earnings :')

I have heard some horror stories so I am not looking forward to any stories on that topic. Let's just pay what is required and keep it under wraps lol.

Is not easy to build new business. Any thing that's new, you have to lose before you will start to gain.

The market seems not to be at it full strength right now,but who knows what will happen in the next few days

But base on my view,i still felt like the crypto market might have to suffer a bit for this month

$0.00
Reply
[-]
poshtoken (74) 4 months ago
The rewards earned on this comment will go directly to the person sharing the post on Twitter as long as they are registered with @poshtoken. Sign up at https://hiveposh.com.
$0.00
Reply
[-]
eflevour1 (48) 4 months ago

Everyday new learning. This is indeed very educative and I’d definitely be looking out for more of your posts. Thanks for this piece.

Magic Internet Money (MIM)-- which may not necessarily be what you're discussing here.

Once people understand Magic Internet Money, they'll try to figure out ways to use it to solve not just use cases but major problems which up to know have been left for institutions and governments. New institutions will need to be created to use Magic Internet Money as envisioned. The could be DAOs, or they could be flesh-and-blood organizations.

I stumbled again with this idea of "attention economy." First time I read that, my brain underwent an 180 degree turn. And then I felt dizzy and smiled, and asked myself, "how come nobody taught us about this?" Many are still clueless . . .

Support was holding strong but 24/h volume kept going up.
This all but guarantees the price will go up within a short period of time.

OUCH!you must have said after waking up and seeing a 12% drop 😥

Yes, Web3 will become a game changer in next 2-3 years. I want to see YouTube's action on Web3.

The more places are here to create that Crypto MIM.

If SPK get a lot of attention and can actually make good amount of money that could really replace YouTube for a lot of users. The problem is what we can see with Hive and the 7 days earning window.

Making a video and being paid only for the 7 first days is too short. And the amount are still low for some people. Imagine the creators working on video for $1000 coming on hive and earning maximum $100 for it in the best case.

That wind up gave me goos bumps! The infrastructure already built here is so inconspicuously lurking amongst the garbage. It's funny when one shows it to people that previously had no idea. It feels still feels like sci-fi to them.