Navigating The World After The “Big Reset” 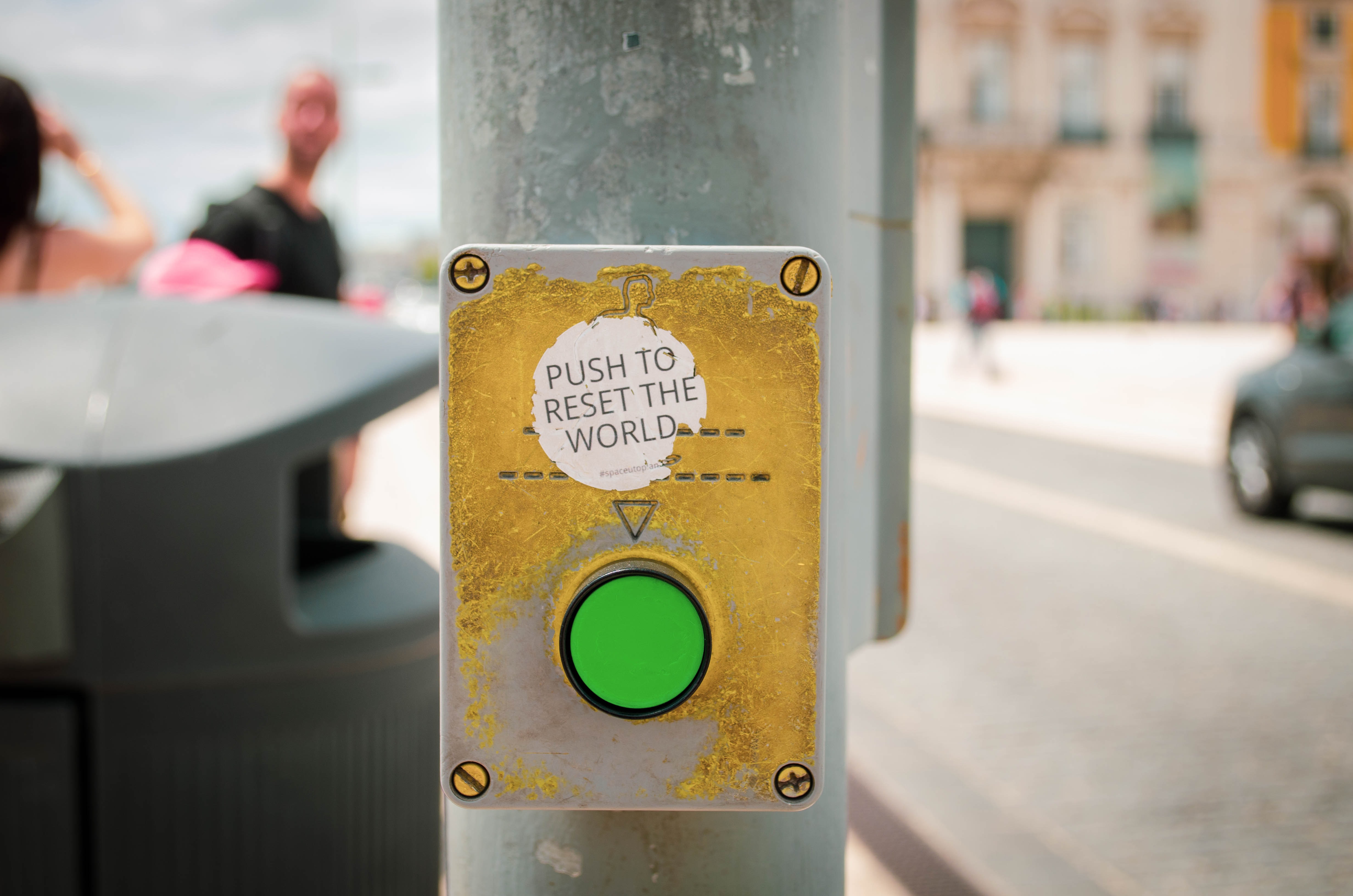 Depending on which type of media you read these days, you may have heard of a “big reset”. It’s usually depicted as an apocalyptic event, in which the world, as we knew it, will be turned upside down. Obviously, many of those talking about this “big reset” are afraid of it. Losing our ways of living – which weren’t all that great, to begin with – is not a nice thing to experience.

In other words, we don’t have to be afraid anymore, because it’s already done, it happened.

What we have to do, though, is to adjust to this new life.

Yes. For about a year, we live in a completely new world. Drastically different from the one we used to live in. Increased control, limited freedom, and, above all, the perpetual promise of all this to be “temporary” are all building blocks of this new reality. One year after, I think it’s time to finally accept that this “temporary” thing, this “just two more weeks, to flatten the curve”, is here to stay. There might be small adjustments to it, but the tables have turned already. That’s the world we will have to live in, from now on.

The fundamental ingredient of this new world is generalized fear. As a tool for control, fear has been used for millennia to keep crowds on a certain path. Fear, justified or not, that somebody else may pillage our village, may forcibly occupy our land, or, more recently, fear that somebody else will take away my job, or live off of the social security I pay, all these were (and to a certain extent, still are) effective tools in shaping collective behavior.

The big difference, this time, is this new fear is for something outside human species. We’re not afraid of each other, anymore, but of something else. This difference is fundamental, and it’s probably the subtle trigger of this “big reset”. Because, in a twisted way, it triggers the basic need for collaboration, for organizing together to face a common enemy, an enemy which is not another human anymore, from a different country, or of a different race. We’re triggered by fear, but we’re also forced to organize together, because there’s an implied “greater good” that must be preserved. “We’re in this together”.

It’s way easier to control species when they feel they have to fight against other species, not against different races inside the same species.

This fear from an invisible enemy is already part of the societal fabric. It may be that Covid, as a pathology, will fade out, eventually, but the reaction is there, has been tested, measured and it can be triggered again and again, if need will be. And there will be a continuous need to trigger this reaction, simply because the need itself has been woven in the societal fabric too. It’s reinforced by its own history. There will be another type of external enemy that must be “conquered”, and we will have, again, to do this “together”.

Of course, the fear is artificially inflated. The danger is real, but communication makes it bigger than it actually is. Hidden agendas, interwoven in this giant mesh of algorithms, from media hunting for clicks, to politics hunting for support, are all benefiting for this inflated fear, in an almost automated way. I doubt there is a single entity, a single cabala behind this reset. It’s simply the tipping point of inter-connected algorithms shaping our collective life.

But enough with this analysis. Since we agreed that’s the world in which we will live from now on, let’s see how can we properly navigate it.

The effectiveness of algorithms, proven by billions of tests ran by media outlets, is hard to imagine. Everything you read is carefully crafted so it will trigger a reaction. The days of “neutral” news are long gone. There’s no incentive for that anymore. So, the assumption that we can find a “balanced” news source is wrong. Even more, the assumption that we are immune to these algorithms is worse.

The only way to avoid being modified by an algorithm is to avoid contact with the algorithm.

The depth of inter-personal relationships is becoming more important than the extent of them. As trust is fading out, eroded by exposure to incredibly well engineered media, the need for reliable social partners is increasing constantly. Friendship is now not only about someone who can listen to you, but about someone who is able to help you get out of a restrictive situation. Few can do that, which is clearly a reason to cultivate those who can even more.

Direct communication, and lives lived in close contact, are the foundation of a new type of friendship, stronger and more reliable, almost like a military alliance.

Our existence is now becoming fluid, at the mercy of arbitrary restrictions. Note: the word “arbitrary” means exactly “arbitrary”. Even though the restrictions perpetrators (being them state actors, by imposing laws, or friends, by emotionally blackmailing you for “the greater good”) are giving you the impression they are basing their decisions on facts, this is more often than not a smoke screen. Those “facts” are built by stacking approximations on top of approximations, seasoned with fear and the need for solidarity. Restrictions diverged from reality a year ago, when the “big reset” happened. Our initial fear, and the need for solidarity validated an initial wave, and that initial wave is used as a precedent now. Causality disappeared and there’s just “how many restrictions this collectivity can securely bear (without revolting too much)”. That’s all there is to it.

So, in order to manage this territory, one should monitor these restrictions constantly. The expectation that our lives will unfold with the predictability of 11 months of work, and 1 month of holiday, every year, is history. Instead, we should keep an eye for “opportunity windows”. We should monitor not only the country in which we live, but many others, to assess potential future events, or just where to escape for the next restrictions wave.

It’s a collective, evolutionary thing. Our structure, as a species, our need for predictability and for comfort, created the setup for this mess. We drained resources faster than they regenerate, we multiply faster than we can sustain ourselves, and we cling to survival desperately, to the point of sacrificing the lifestyle of an overwhelming majority, in order to save a vulnerable minority, sometimes even against its own will.

We forgot that we are, by definition, mortal, and we started to fool ourselves with unsustainable promises of longer and longer lifespans, at the expense of everything else around us. And we cling to these long lives even if we spend them in confinement, as prisoners glued to screens which are hypnotizing us with series of phantasies that we call “movies”, or, at best, which are showing us distant faces of loved ones, friends or colleagues. We cling to this form of existence even if these lives mean that, during this pandemic, we will prefer to save only those infected with this virus, while ignoring cancer, diabetes or other emergencies.

It’s us. We generated the big reset. And if we want our world back, we are the ones who’ll have to change.

Initially published on my blog.

There is an ongoing funding proposal for two of my Hive-related projects, which will allow me to support some of the costs involved. If you want to support this proposal, all you have to do is to vote it using any of the two links below:

I'm a geek, blogger and ultrarunner. You can find me mainly on my blog at Dragos Roua where I write about productivity, business, relationships and running. Here on Hive you may stay updated by following me @dragosroua.

Wanna know when you're getting paid?

It's free to use, but if you think this is a useful addition, I'd appreciate your witness vote.

The danger is real,

No it's not.
It's a hoax.
If you can put down the fear goggles, do the math, take any countries net deaths over the last 20 years and then look at 'lack of flu deaths'...and compare... a sane person will/can, only come one conclusion.

And if we want our world back, we are the ones who’ll have to change.

Don't be scared.
You can only be 'triggered into fear 'if it's residing within you already.
Change starts on an individual level with not being a pussy. Being an adult.
( I see little evidence of it at the moment, unfortunately - but it will happen...)

If you read carefully, you'd realize that we're on the same page. There is a danger in this virus, but:

Thanks for this straight forward perspective on what's going on. It is seldom that I read something by someone who has the courage to look things in the face.
I feel another tiny bit less alone now!

You're not alone. Every once in a while it's important to know that.

I guess you are one of those people it would be good to have around.
So if you ever happen to need a save-ish retreat in the east of Austria, drop me a line ;)

Thank you, I'll definitely let you know! Traveled a couple of time through that part of the world, mostly driving, and I have very nice memories.

what a fucking inbred, do people actually listen to this cumstain ?

The fear of a fake plandemic is spectacularmy moronic, even for normies...

Very good and enlightening. Only a few of us are aware of this situation. Luckily crypto will be of a big help at the moment.

Thank you! Yes, the transfer of trust from current political structures, into blockchains powered by cryptography, is one of the ways out if this. Or maybe not out, but in a new direction...

I like crypto but i think the governments will try their best to control it, hopefully they don't succeed.

As a species we're unable to work together enough to go a day without killing each other. There is no way the governments of the world could work together to create a hoax of this scale.

To those who's only argument is claiming people are "scared" of a hoax. Sorry you're scared of the idea our governments are powerless and incompetent enough to not be able to protect us.

Not following you very well, care to detail? I'm interested in what you have to say.

It was meant as a reply to a comment above, not to your article which I agree with.

To actually believe covid is a total hoax seems to be a coping mechanism. It's more reassuring to think that the government is in total control doing nefarious shit than to think it's completely incompetent and struggling to protect us from something that shouldn't have killed so many.

Got you. Yeah, makes sense. Thinking not only that government, but that anyone, can be in total control is a form of magic thinking, the kind that created almighty gods...