The main Splinterlands sale for the new Chaos Legion edition is on. Splinterlands has experienced a massive run in 2021 and now it is a well established game in the crypto world.

Let’s take a look at the numbers, how is the game doing? 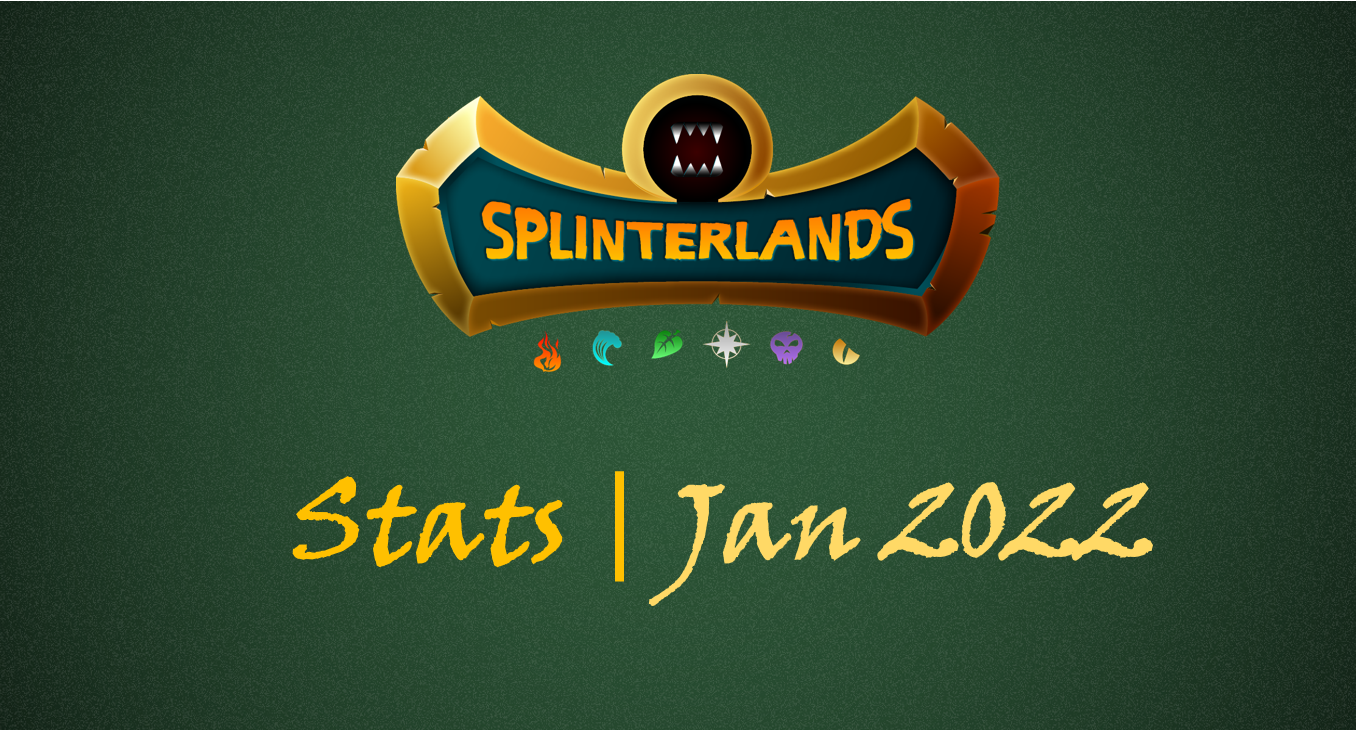 One of the main things that was driving Splinterlands growth is the SPS token. Since the launch of the token back in July 2021 and the expansion to the BSC chain, all metrics in the game went up by a lot. There were no new cards on sale for a while as well. This is the first time in an almost a year where we have an open sale of card packs.

The following topics will be covered:

The data has been queried from the Splinterlands API but in combination with the data from the Hive blockchain.

Transactions represent the overall activity in the game. Here is the chart. 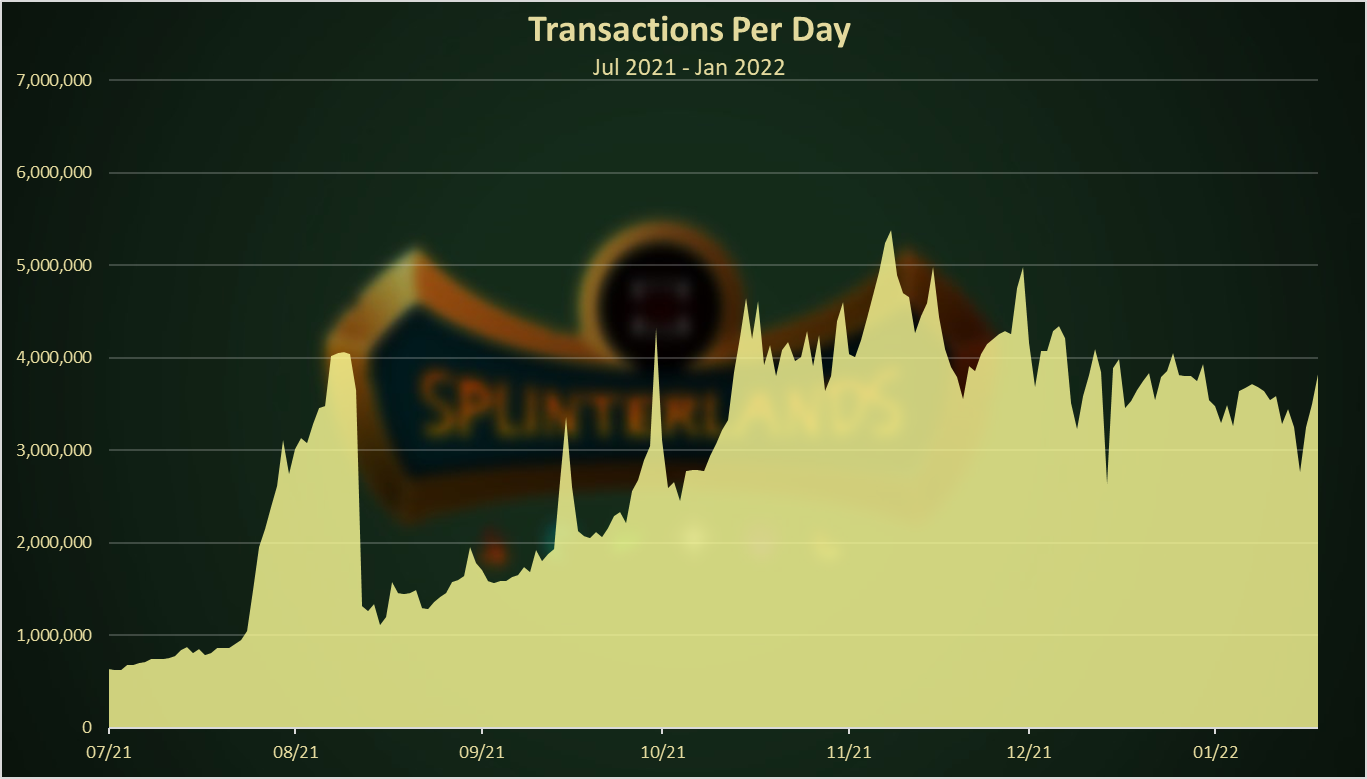 The number of transactions is n the range of 3M to 4M per day in the last period.

Here is the chart of the daily numbers of games played for the period. 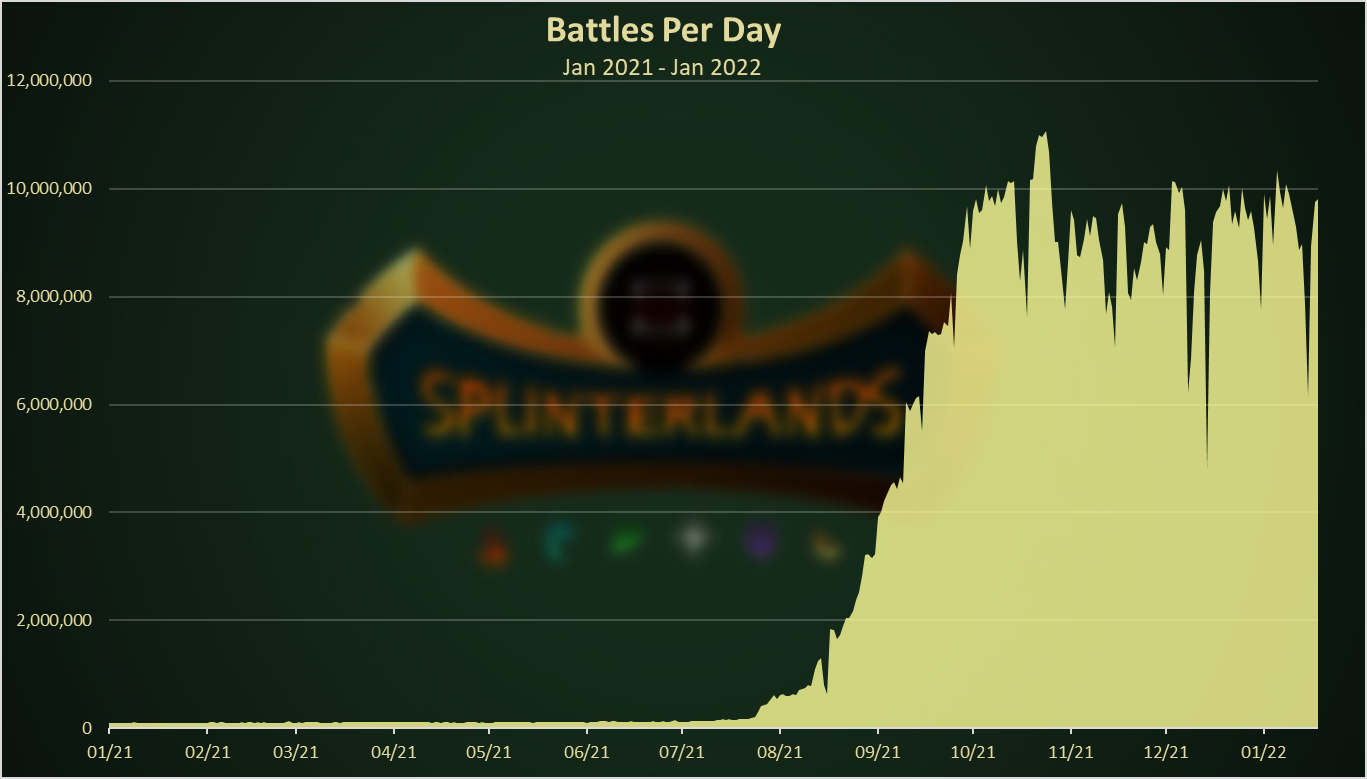 The growth has been constant for a three months in a row and after November 2021 we are seeing more steady data.

This is one of the most important metrics for every dApp, how many active users have there are. Here is a data for daily active users [DAU]. 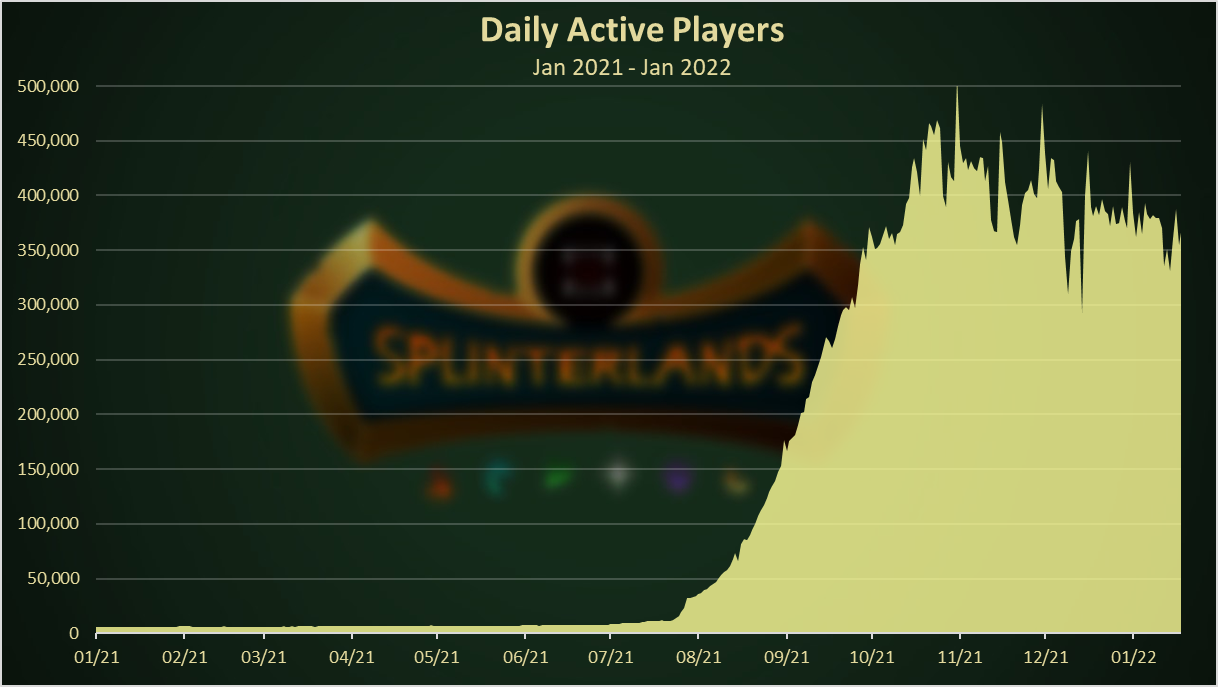 A similar chart as for the numbers of battles. Up until July 2021, Splinterlands had somewhere between 5k to 7k daily players. Then these numbers exploded and just keeps going up to a half a million daily players at the peak. In the last period there is around 350k DAUs.

Here are the new Hive accounts created by Splinterlands. 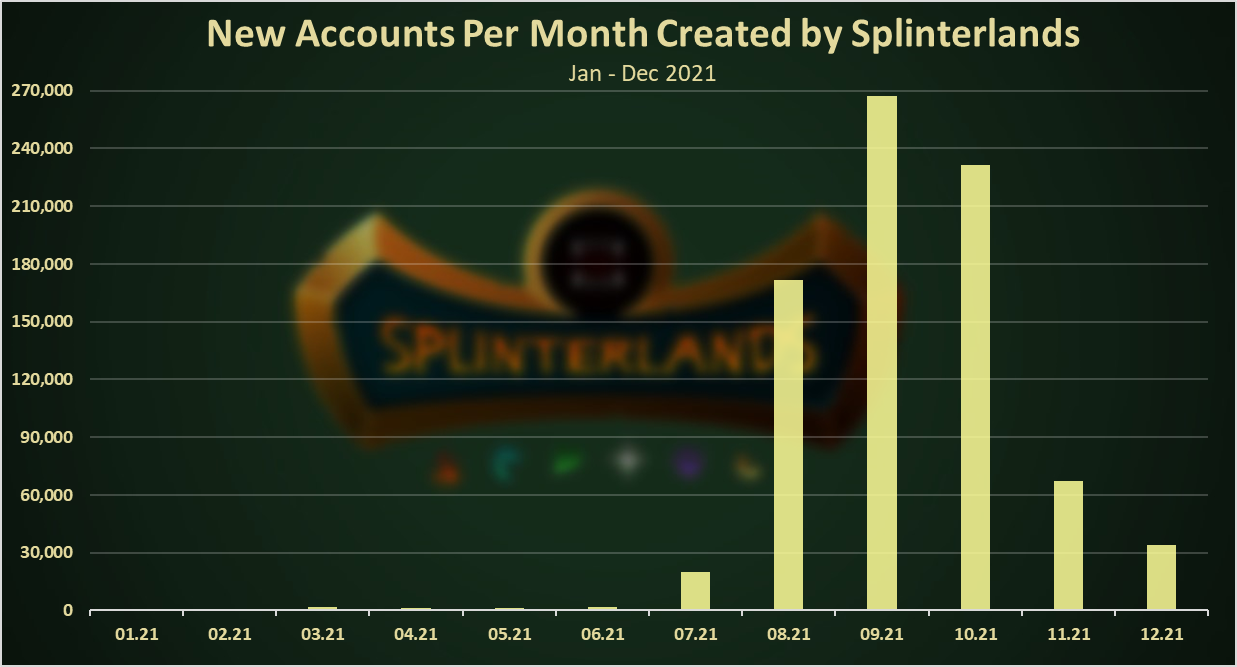 In the past Splinterlands was creating somewhere between 500 to 1500 new accounts per month. Starting from July 2021 these numbers have increased by a lot! In September 2021, that is a record high month for new accounts there was almost 270k accounts created. November is also high with more then 200k accounts. The last two months of the year a lower with 67k accounts in November and 33k in December 2021.

It should be noted that around October Splinterlands has introduced a new system for rewards in the lower leagues and this has cut off a lot of bot accounts.

Another interesting metric is DEC supply. DEC is burned when buying mini edition cards, potions, orbs, skins, guilds upgrade, etc. The DICE edition was exclusive bought with DEC that is burnt. That edition is sold out now.
On the other side the higher the price of DEC is the more is printed.

Here is the chart for the DEC burned vs created in 2021. 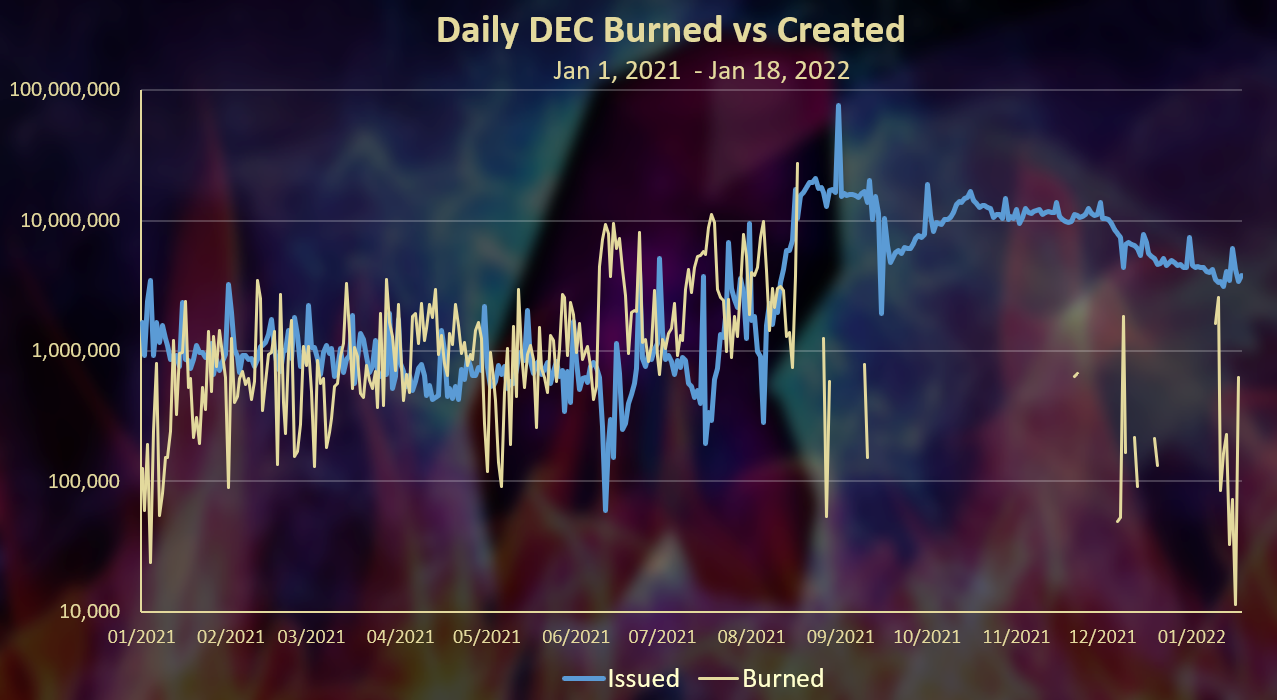 Note the chart is on a logarithmic scale.

We can notice that in July and August there was an increase in the amount of DEC burned (yellowish line) but then a drop. After August 2021, there is much less DEC burned, and for the first time in years there is days with zero DEC burned. This is because the DICE edition is sold out and that was the main sink for DEC.

Here how this has affected the supply of DEC. 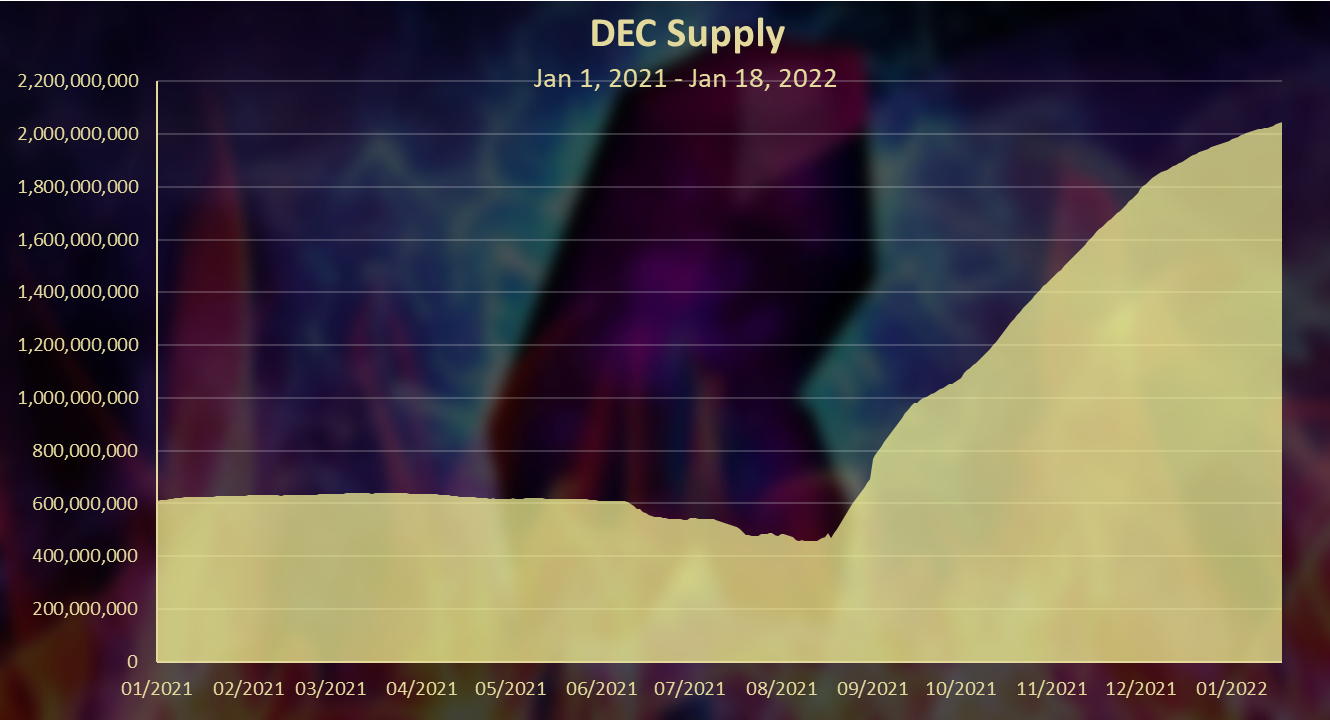 At the start of the 2021 there was around 600M DEC in supply and it remained at those levels until July. Then the supply started decreasing (aggressive DICE buying) and after DICE was sold out the DEC inflation kept growing.

As the price of DEC increases so does DEC printing. Because of this we can see a lot of growth in the supply in DEC at the end of 2021, reaching a 2B recently. In the last days we can see that the supply is not growing so drastically, mostly because of the low DEC price.

At the end the price for the main token SPS. 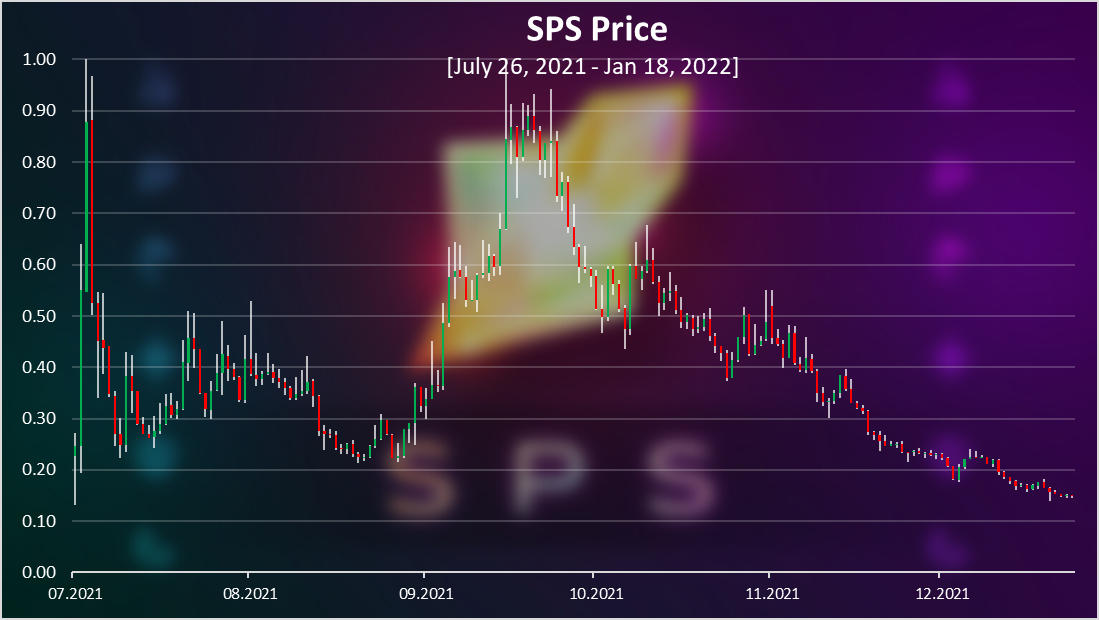 SPS has been around for more than half a year now. At start the price spiked to almost 1$ and then dropped to around 0.3$ and increase to dollar again before the presale and the implementation of vouchers in September 2021.

Since then, the SPS price has been in a steady drop and now it is seating around 15 cents. Splinterlands has recently presented a roadmap for SPS, with a lot of new upcoming features and a reduction in the new tokens emission. We will see how will this affect SPS in the future.

Splinterlands game just get started in the crypto space with blockchain games becoming popular a wide range of user adoption will be recorded ranking splinterlands a top played game.

Price of SPS bottom out i guess its a good buy zone for users as well.

Still can't believe it's been like a half a year since SPS launch. Will be interesting to see how numbers look next month. Now with packs being rock low the entry point for new players is now. So the stats should show us a balloon in growth if all is going well. Numbers are still looking solid though only a small trickle down which is pretty normal after a huge spike like it had.

Splinterlands has brought in new generation of blockchain enthusiasts to hive chain. Imagine if other projects on chain could pull the similar amount of traction.

Great summary boss Nd a good idea on this post

Congratulations @dalz! You have completed the following achievement on the Hive blockchain and have been rewarded with new badge(s):

This is great! The data invalidates the naysayers who think that the game is on its death march.

seems that players are staying :)

SPS should go up any time now...

Now that the rubber has passed is the best time to pile up extremely cheap cards.

That's good. It shows that many people are joining splinterlands games every day and they are making alot of token every day.

I stand on a high mountain :(

Majority are multiple accounts and bots
How many unique users?
Not many