In the last year Splinterlands has created more then 700k Hive accounts!
With such a massive number of accounts created how many of them have digged a bit deeper in the Hive ecosystem and powered up some HIVE?

Powering up HIVE is a long term commitment around here, having in mind the three month period that takes to power down.

With this in mind, let’s take a look how many accounts that were created by Splinterlands powered up HIVE and how much? 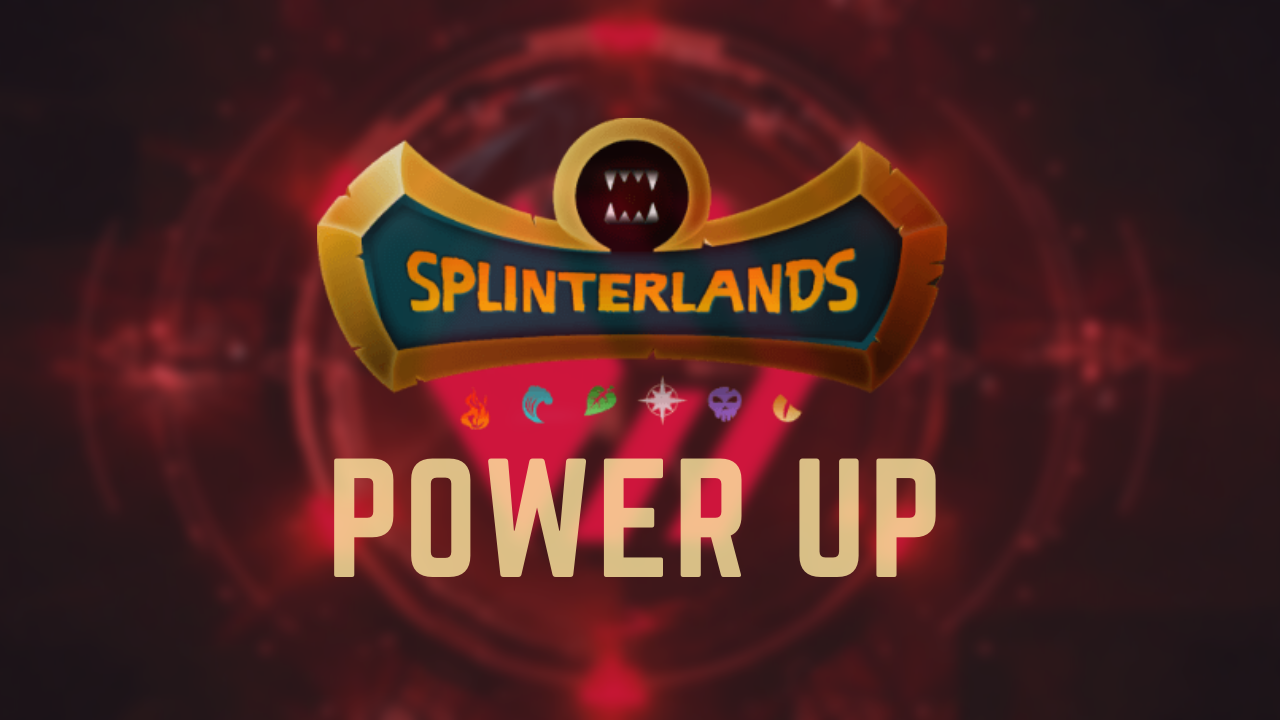 We will be looking into the following:

The period that we will be looking at is the second half of the year from June to December 2021.

Here is the chart for the overall accounts created. 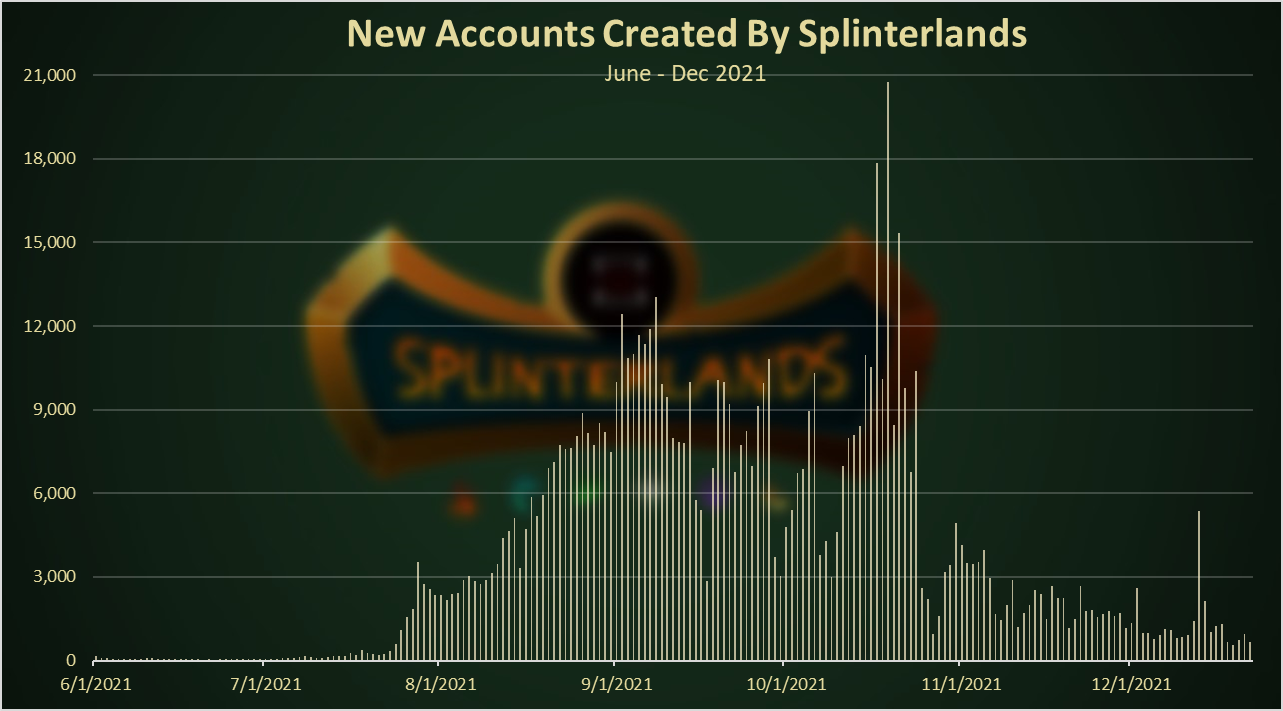 As we can see the number of accounts created has increased a lot towards the end of July 2021. Prior to this the numbers were quite low. The number of new accounts grow a lot reaching 20k per day in October. Since then, the numbers dropped down a bit.

Note: for December and November I have calculated the accounts created from @ocdb as well, as it seems that this account started creating accounts for Splinterlands now.

Number Of Accounts That Powered Up

How many of the new accounts powered up? Here is the chart. 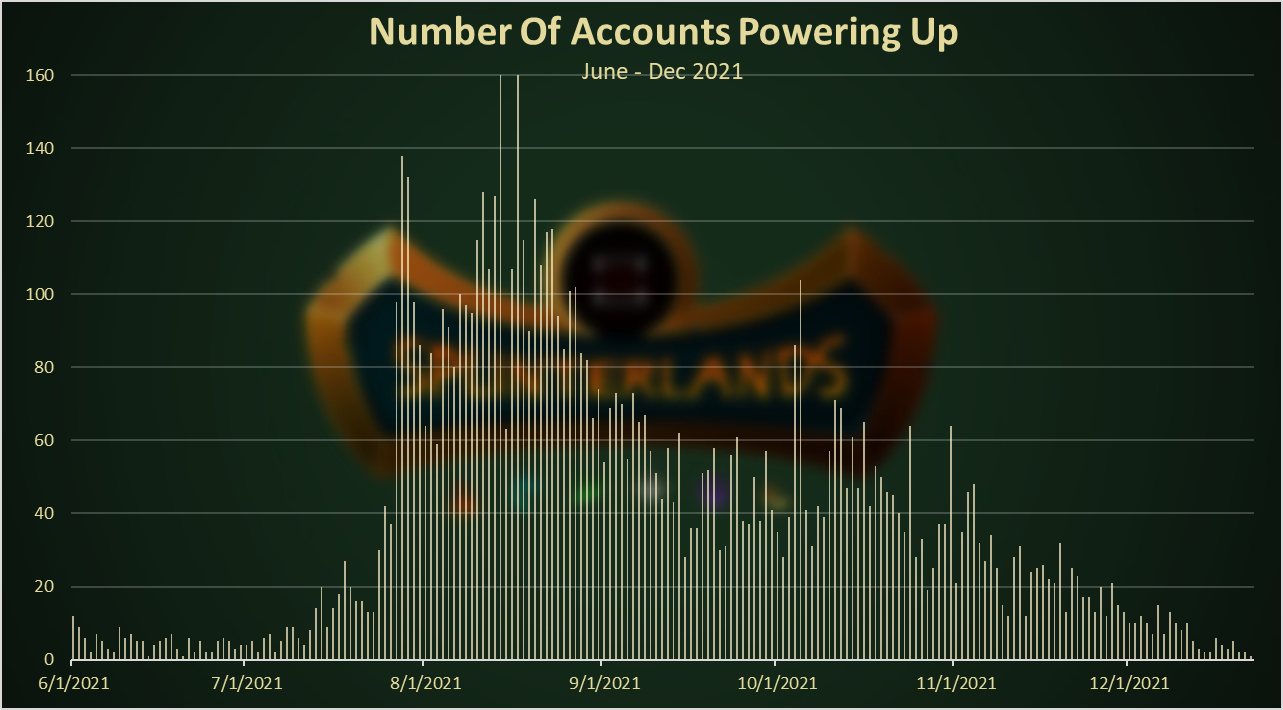 While the numbers here are much smaller than the created ones, we can see some clear trend.

A massive growth at the end of July and in August and then a downtrend towards December. At the peak there was more then 100 accounts that were powering up.

Note that this are accounts that powered up HIVE by them self, not a delegation or HP from other accounts like Splinterlands, that is usually delegating some HP to accounts created from in game.

In total, around 8000 accounts powered up some HIVE.

How much HIVE the accounts powered up? Here is the chart. 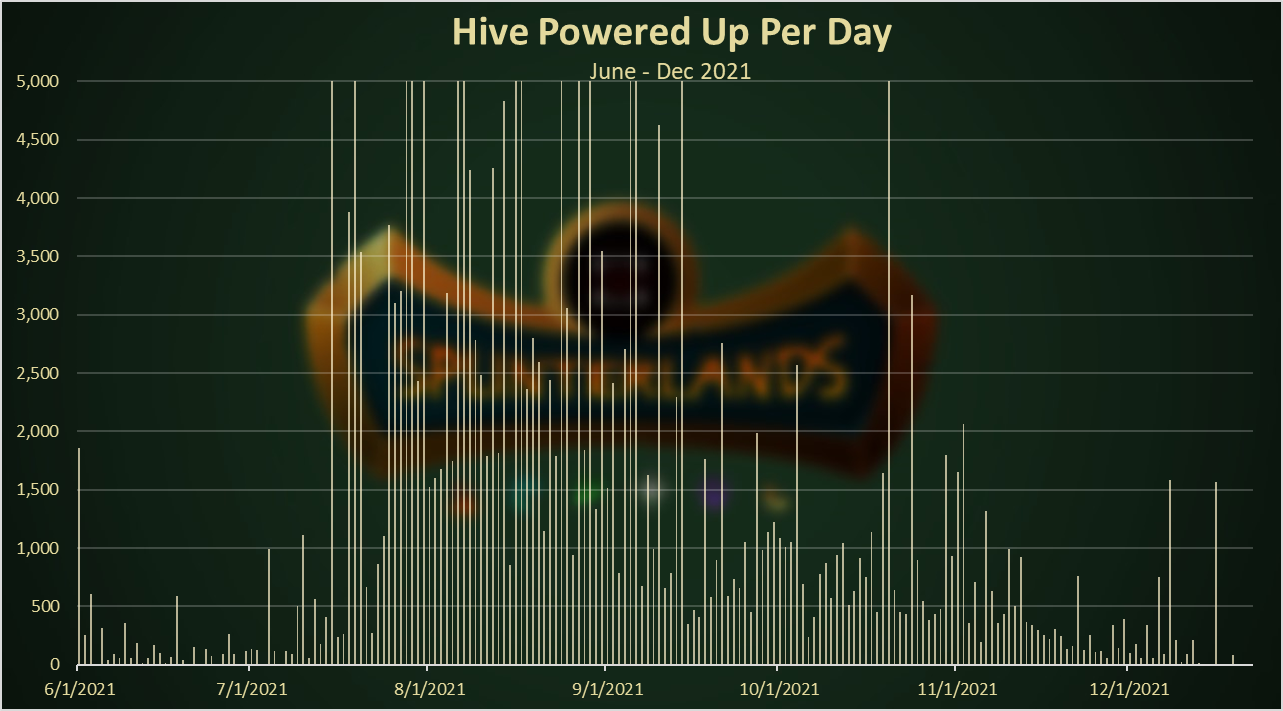 A lot of spikes here, with lows under 500 HP per day to more then a 10k per day.
In total the accounts created from Splinterlands powered up around 340k HP. 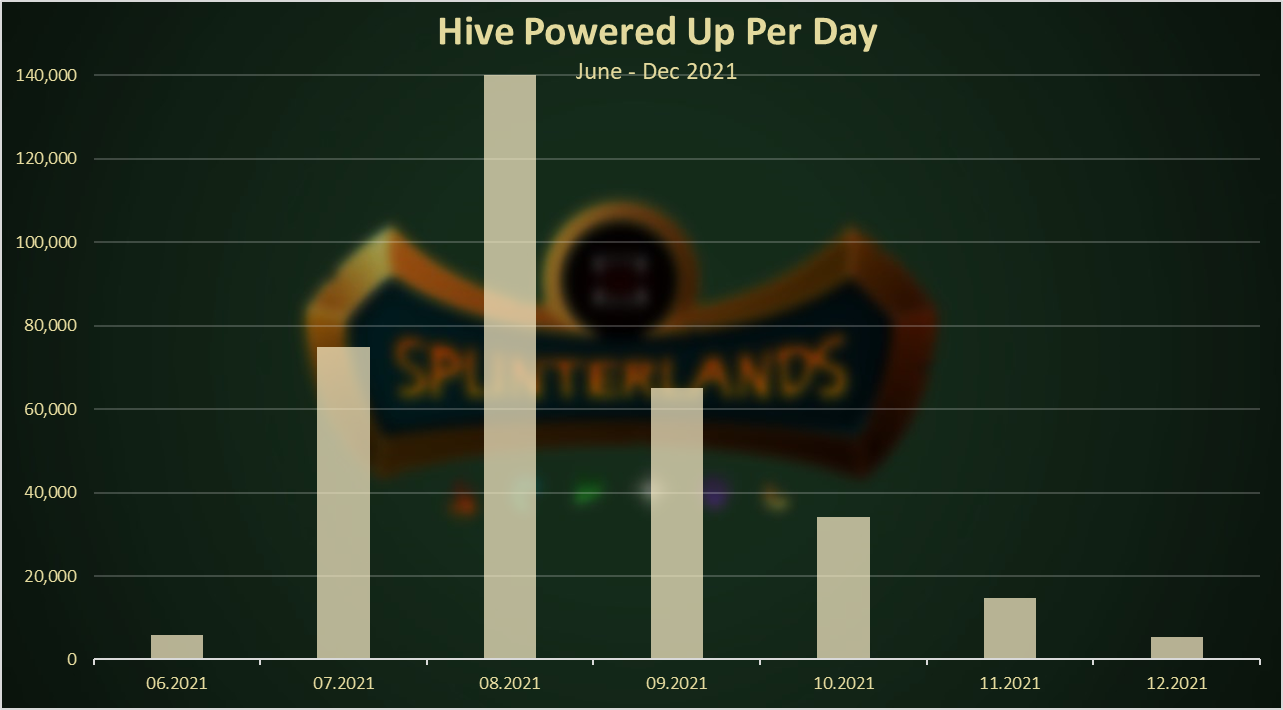 Top Accounts That Powered Up

Here are the top accounts powering up. 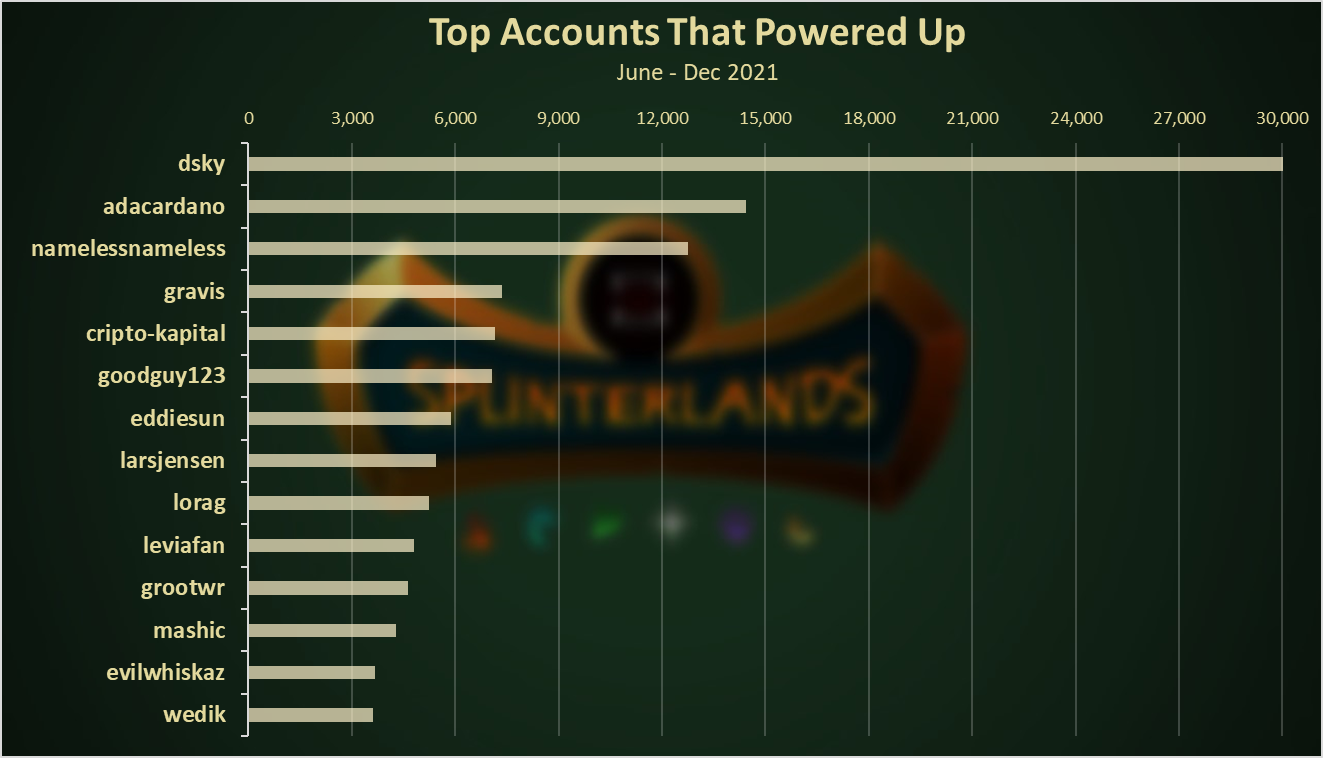 The @dsky account is on the top with more then 30k HP, followed by @adacardano and @namelessnameless.

As mentioned, a total of 8k accounts coming from Splinterlands have powered up some HIVE.

As for a lot of different metric Splinterlands have influenced the powering up on the chain as well. More than 8k accounts powered around 340k with the top accounts powering up more then 10k. The game itself powered more then 1M HIVE.
Powering up HIVE is probably one of the most important metric coming from new users as it shows a long term commitment to the platform, having in mind the long period for powering down. Splinterlands has bring a new wave of users around here and some of them have expanded in the broader ecosystem and powered up HIVE.

Thanks for mentioning me!!!

I didnt know I am one of the top powerup. Haha. But I am still proud of it. Love the hive blockchain so far.

Awesome to have you!

How did you find the process of getting HIVE and understanding what powering up meant?

Always interesting to get the perspective of people already in crypto, but not Hive.

Yah, i am quite surprised that quite a handful of hive people are isolated in hive blockchain despite been around of a year or 2. They do not much knowledge like even defi services like "staking"/"lending"/"swapping" or "nft-ing". But interestingly, as hive blockchain grew, now the hive community is not longer that foreign to nfts as we have hf nft and hive punk already. We also start to see more people trying out beeswap as they are airdropping bxt tokens and provide high apy for lp providers.

I remember when I explore hive, i am quite surprised by how different hive works as compare to other blockchain. Eth is charging $25/transaction and sometime i am paying like $200-400/transaction to "over-take" others. So you can see how many people are hungry for altnerative blockchain who offer lower fee and more transaction per sec. So that is why bsc+solana+polygon etc. all went up like crazy this year as they offer layer 1 and 2 solution with fees only at $1 or less and allows more transaction to take place. Some old projects like neo tried to use dual token system, so you hold the native tokens to have airdrop of token 2, and when you transact, you use token 2 as transaction fee. In this way, you dont need to touch your native tokens at all no matter how many transaction you made. Yet, fast forward to years later, these dual token projects had failed to take off.
So you can imagine how happy I am when I realise the "gas-less" hive ecosystem.
Actually there is a project that I personally felt quite similar to hive and that is EOS. EOS is like the reverse of hive. Instead of hive users responsible for their own activity volume, EOS wants the dev to hold the EOS token to allow the incoming activity volume. EOS ended up also fail to take off.
Scaling is also an issue to blockchain. So you can sense, how happy I am when I see Hive seem to be able to tackle both of these issues.

Here's a fun fact: EOS was made by Dan Larimer who made Bitshares and Steem. Hive is a fork of Steem that improved so many extra stuff. You could say EOS is Hive + Smart Contracts & some changes.
!PIZZA

Happy to see you ventured further afield and have found the tribes.

Yup, great support from the community! Loving it so far, aiming to hit 20k hive in 2021!

It is great that you did that. Welcome.

We look forward to seeing your presence on chain. The offerings along with opportunities are only growing.

So many wonderful is happening.

Getting christmas badgers, joining weekly challenges from splinterlands, managing and supporting local splinterlands players and so far 3 of them are joining hive blogging too.

You welcome. Great to see new faces around!

Terrific work. Overall, not an overwhelming number but it does show the potential and what can happen.

If we have 10 Splinterlands, then we would see 80,000 powering up some amount of HIVE. That would really boost the numbers and help to create the scarcity.

Of course, it a portion of those 8,000 get active, it will help with the overall numbers down the road. There might be a few top producers brewing in there.

Thanks!
It is a progress for sure... the network effect can take away from here :)

What does it look like if you break it down by USD? The cost of powering up in the summer is a little different now. Would be interesting to see what the power up is in terms of dollars and dollars per account.

Hive becomes a precious resource and we see more and more investing in it. But not to go all-in with Powering Up, but also keeping some Liquid for opportunities on the market. And with it HBD attracts more users, would love to see some stats on it as well and how much is deposited in Savings.

Interesting stats and you do great posts keeping us all informed.

But not many use social. I expect a larger amount goes to bots of the power-ups ( and delegations).

So more than 1 in 10 Splinterlands-created accounts powered up on their own. That's not a bad ratio.

I'm not a Splinterlands player myself, but is the drop off just due to the game not signing up the same amount of accounts each day anymore?

Do you think it will go back up after a future in-game release that encourages more account sign ups again?

The peak seems to be at the start of the sps airdrop (governance token) and seems to have cooled down a bit after. Personally I think it will go up again when there's more promotion, general sale of the new set, news if the general sale sells out fast that sort of stuff. Time will tell though but I think they're looking to promote it some more!

i could be wrong but from what i remember in all different talks... there were several factors:
fist one was hype around SPS token. then bots were doing pretty well in lower leagues until they changed it. also i think they were creating hive accounts for everyone that signed in, now i thing they are creating hive accounts for players that buy a spell book (because they had to burn a lot of hive for account creation and there was a good amount that did not continue to play). this i am not sure but i think i heard it somewhere.
There is some promising talks when general sale of Chaos legion starts, we will see.

Development and adoption usually goes in waves. This wave reached it peak in terms of new users. But that is not a bad thing, if we manage to keep those around it will grow organically from there.
At the beginning there seems to be some bots as well.

This is a very encouraging info! Thanks!

100% This!
I don't expect to see the trend slow down much in 2022 either. It might even pick up even faster. We've got over 1.14% people getting Splinterlands account converting to power ups. That's not bad at all IMHO.
Merry Christmas!
!PIZZA