Russian And Ukrainian Currencies Getting Creamed

chekohler (76)in LeoFinance • 9 months ago

The unrest in the East continues and it hits up, so do investors look to divest from the countries, while citizens are looking to hedge or get money out of the country. Both these forces are pushing a devaluation of both the Russian Ruble and Ukrainian Hryvnia. Of course, most of the focus is on the war front and politics, and others can cover that far better than I ever could.

But I would like to look at the casualty of war that very few think about and that's the everyday citizen who simply wants to go to work and provide for themselves and their family. 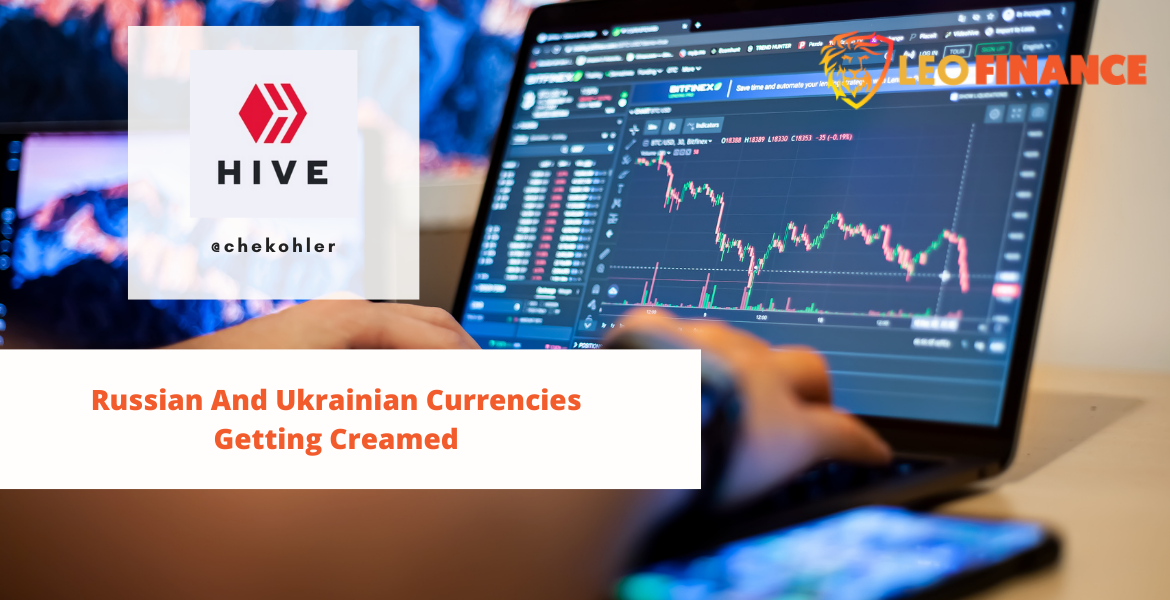 When unrest breaks out in a nation, investors look to divest from risk, businesses have to charge more to cover additional risk, and of course, certain citizens would look to get their wealth out of the country.

Since the talks of war heat up, so too do both nations' currencies take a royal battering. This affects the average citizen's savings, income, investments, and any locally priced assets.

If we talk a look at both the Ruble and the Hryvnia they've taken a right clobbering. Comparing both currencies against the dollar, we can see both have hit all-time low's against USD

The Ruble at 80.10 to the USD and The Hryvnia is at 29.36 and who knows how much further it can fall with no resolutions in sight in the near term.

Wages don't tend to react to the news of unrest so it effectively makes even those who earn an income poorer on average. Russia and Ukraine aren't known for paying competitive wages either, so it really leaves a lot less margin for the average Joevetic to cover their expenses.

Comparing it to gold

Compared to USD is one thing, but as a moving target itself, it doesn't always give us the full extent of the pain. If we compare the currency devaluation to gold, they have not yet hit all-time lows but it's creeping up into those regions.

War doesn't come cheap and war is often funded through inflation, and with both countries ramping up military spending and pulling purchasing power out of the real economy into the military-industrial complex which is a net destruction of wealth, I don't see either countries citizens being able to maintain their purchasing power investing in locally priced assets.

If we consider that this is where locals invest and pension funds are probably holding these equities, it's not looking good for many of these local's portfolios.

Despite both countries opening up more to the idea of bitcoin, We haven't really seen bitcoin markets in Russia or Ukraine perform any differently. I don't think most Russians or Ukrainians are considering bitcoin as an option to store their wealth outside the country and it's more seen as another risk asset you want to divest from and hold something you have "Trust" in and that is still local currency for most people.

As people sell off the risk assets they generate additional tax revenue while hiding in cash it pushes deflation as people horde currency and that creates an even bigger kitty to poach through inflation.

These possible behaviors could see the average citizen in both countries become net poorer faster than years gone by. Usually, when currencies weaken it attracts investment and makes labour and exports cheaper bringing in more currency to offset losses.

But when you have this kind of unrest, you don't tend to have those offsetting forces. As sanctions also limit the Russian side from accessing capital markets, it also limits their credit creation and could result in liquidity shocks in local markets.

All these and many other forces aren't a good omen for the average citizen's pockets. Most won't even be considering this, they would rightly be concerned with what the media is focusing on, the front lines.

Sadly while they're focusing on who hit who first, both sides citizens are getting their pockets picked.

What do you good people of HIVE think?

So have at it my Jessies! If you don't have something to comment, "I am a Jessie."

If you liked this post, sprinkle it with an upvote or esteem and if you don't already, consider following me @chekohler and subscribe to my fanbase

I think Putin screwed it up for both the countries just because of his ego. Force/War is never the answer. It's the complete opposite of development. This will provoke and compel other nations to go against Russia and cut ties on several levels to further hit its economy. Who is going to suffer? Common man! Also, in a situation like this, people just think only to live another day with food in their stomachs. Not many would be worried about the long-term effects on their wealth.

Indeed his ego and selfish nationalist interests, I can't imagine there wasn't many ways to resolve this peacefully and work together, I always think trade between two parties is better than any kind of war, if this continues I agree, other nations will get involved and it could escalate.

I can't believe we're seeing all this unfold, especially after the last 2 years of drama worldwide. I really feel for people who have to live like this and all the fall out that will come from this, it just seems like unnecessary waste of resources and disturbing ordinary peoples lives for political gain

Trying to look at it from this angle now...

"What were they thinking?"

I mean the western response is quite predictable. Sanctions. We won't buy your stuff (resources), and we won't sell you our stuff (credit).

I wonder if an energy market to the south east could replace the whole of Europe. I think somebody had some confidence in some back-up plan. Self-sufficiency and/or alternative support.

The West looks as weak as it ever will be, implosive politics all in place.

When all else fails they take you to war.

We saw a lot of failure so no surprise here. What is it good for? One thing - redirecting your people's attention at the wrong enemy. Not the greedy maniacs but the crowds controlled by other greedy maniacs.

The common people should know it is always here in one form or another. We've been warred upon for two years now.

Well, I could have written this in one sentence. Something like...

I can't get my head around it either, I don't think that we know enough of what's going on behind the scenes. I get the idea behind curbing capital going into Russia but since we in such an interconnected economy that we all get hurt by these things. For example, if Germany cuts off gas, energy prices skyrocket hurting their people and economy.

I thought we learned that you can't just turn economies on and off, as what happened with covid.

I totally agree it's probably a bait and switch, keep their eyes on the shiny stuff and pick their pockets and make them poorer. If you think prices for things and taxes to fund this will be reduced over time you can forget it, it goes up and stays up

This war is a disaster which will hurt both sides.
War is the ultimate failure of reason.
The interconnectedness of Russia and Western Europe was still in its infancy. This is infantcide.
It’s a sad day, and will be followed by more sad days.

Absolutely, it makes everyone poorer and stops us from working together to get out of this hole we find ourselves in after the last 2 years. I don't see how we recover if we keep gong backwards like this

Yep, it is an idiotic distraction from the true task at hand!

Misdirection through outrage is a governments best tool

If I were in Russia, I would already have lots of this kind of Rubles and that Hryvnia buried at a secret location by now.

I am just kidding.

The Ruble at 80.10 to the USD and The Hryvnia is at 29.36 and who knows how much further it can fall with no resolutions in sight in the near term.

They probably will not fall to/below 313.97. Currently that is $1 USD in Hungarian Forint (HUF), which is the currency of my country (Hungary). Yes. 1 Hungarian Forint (HUF) is currently $0.0031 USD. And we are the neighbor of Ukraine in central Europe. And as I know, currently we do not even have any war related things going on. Hopefully the conflict between Russia and Ukraine will not affect us either. It is already bad enough having to live under the local minimum wage.

Have a nice day. All the best. Greetings and much love from Hungary.

lolztoken.com
What type of fruit is not allowed to get married?
Cantaloupe...
Credit: reddit
@chekohler, I sent you an $LOLZ on behalf of @xplosive
Use the !LOL or !LOLZ command to share a joke and an $LOLZ. (2/4)
$0.00
Reply
[-]
chekohler (76) 9 months ago

I didn't know hungry's currency is that weak damn and I thought ours was rubbish at $0.06, I guess it can always get worse.

I saw Hungary also pushing troops to their border too, I guess every country in the region is on high alert, I can't imagine what it must be like and what's going on there.

All the best mate

This Russia-Ukraine wahala,it really affect BTC today and investors are leaving the country and their currency are really devalue.

I am a Jessie.