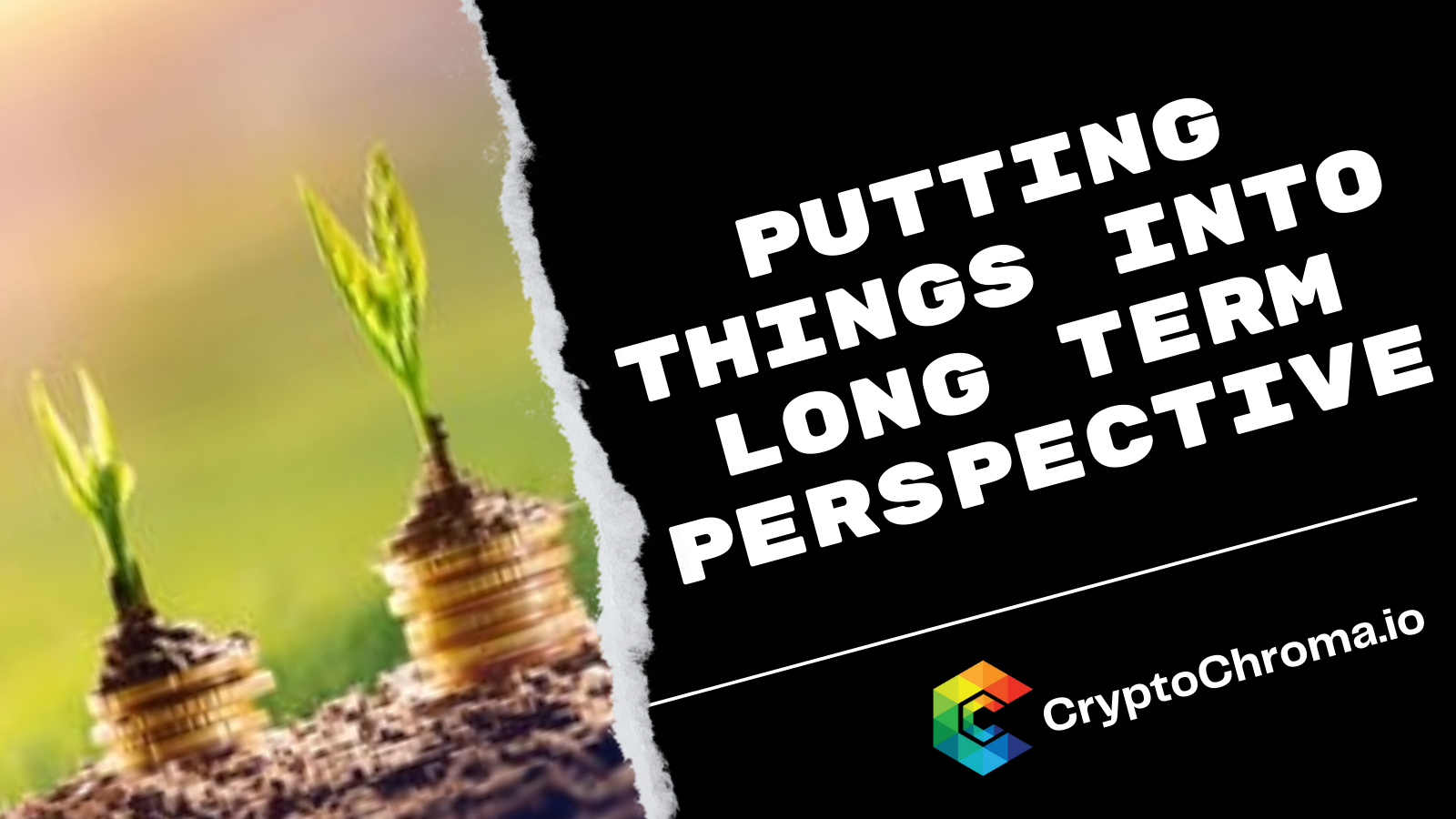 Over the last two weeks the crypto markets have been getting hammered. Not only in price but also new laws, crackdowns etc as the world starts to negatively look on to proof of Work and start turning it's eyes to Proof of Stake systems one in which Ethereum is headed but Bitcoin is not. This in itself could be one of the turning points for the two big cryptos that have been going head to head for a while when Ethereum changes over to a Proof of Stake system.

I remember all the predictions from people thinking Bitcoin was going to moon to $75,000 - $100,00 and just blow the freak up in 2022. We seem far away from that now. When people start predicting wild rallies like that it's almost always time to get out as the Euphoria sets in. I feel like we are in fear/desperation right now and not into panic mode just yet which means further declines. But when you look at a chart like this it starts to make sense. 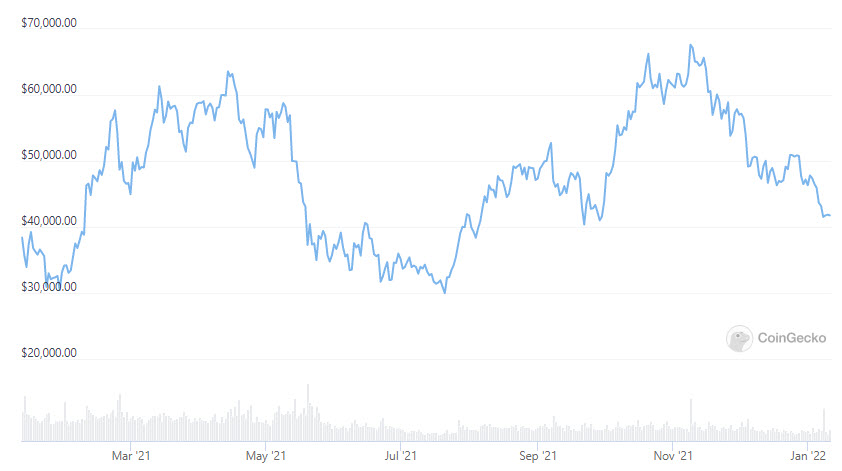 we can see the real price of bitcoin hasn't moved much at all. Instead it's been constantly finding it's new base point. May - July those 3 months we saw 30- 35k and then a rally after. This time I feel like we floor at 38-40k and trade sideways for a bit before we start to rally again.

Ethereum is it's own story if we look at the chart it's actully been on a steady increase with limited bouncing around. The other things to take into account is now every crypto is like it's own business. The way they work in terms of how much is printed, burned, minded etc is all different for each system including use cases which is a big one. 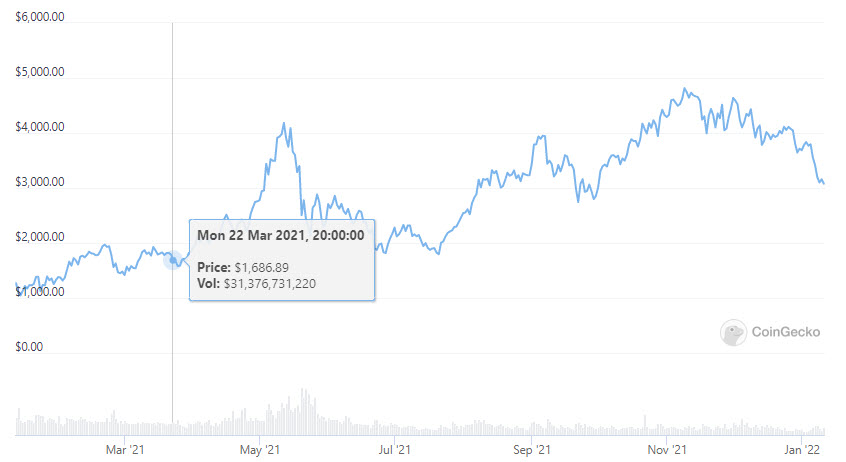 It still somewhat mimics the Bitcoin graph but when we start looking at a year ago to today we see that's still a massive 200% gain! That's a lot for an established crypto but I have one more for ya!

Sure we all know that big ones but what about a trending crypto how does that look?
In this case I'm going to show SPS over DEC as I feel it will eventually be the most stable once the airdrop is completed. 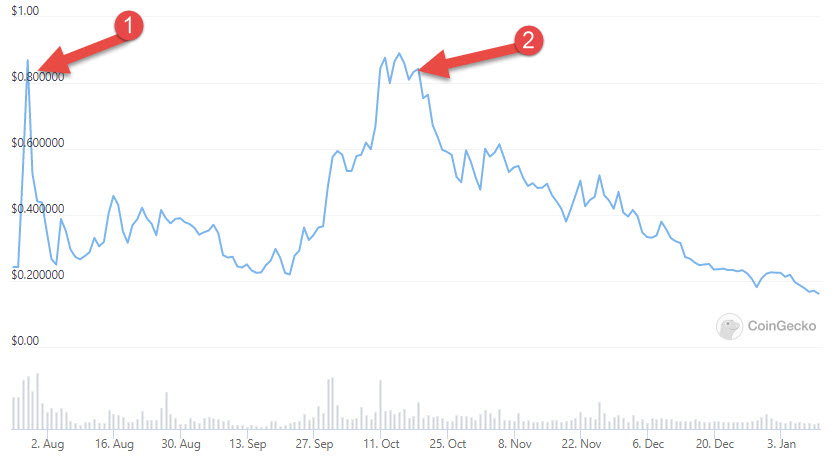 We can see that between the two feels like the normal price range of SPS (Splintershards) if there's nothing really going on to push it. Right now SPS doesn't hold a lot of value. We most likely would be back around that $0.20 - $0.25 range however with the markets getting hammered a $0.15 seems more reasonable and I don't see it falling much more than that.

Besides APR rates the only value coming out of SPS is vouchers but there's not a high demand for vouchers at the moment being that buying packs will be open to all very soon. This will make it so that vouchers are an added bonus why buying packs. For the bonus packs to get them with larger orders you'll need vouchers. The issue. I feel like anyone buying that many packs already has the vouchers so I see the use case dropping even lower. It won't be till the new "dice" packs are released I believe some time in summer which can only be bought with SPS that any value will be regained. However the question is what will happen with all that SPS is it just going to get dumped back on the market? If so that could mean the price falls even lower.

There's other factors to take into account such as primary investors will stop getting their drops soon. New drops will come online once the airdrop 365 days is completed which is said to be less SPS going out and only earned from actions within the game. Battles, Guild battles etc. All of those will start slowing down as well at a rate of 1% per month thus 100 months and the supply of new SPS will be gone. (or 8.33 years a long time) that diminishing supply I don't see effecting use till about 2-3 years into it so not until 2025 and who knows what state the crypto world will be in including splinterlands.

Why I wanted to go over this is so you don't simply look at numbers in terms of price. You need to understand that ever crypto has it's own things going on. For Ethereum it was the NFT boom, for Hive it was Splinterlands and SPS token and for Bitcoin it was business investing large sums of market cap. What's next?

It is the only scale I operate upon. It is difficult to play this game in the short term.

The longer term charts really put things in perspective. Gloom and doom and short term, even if it last a couple years. Think of BTC, much higher than it was in 2015.

It will be much higher in 6 years too.

So true that's only one year and we are still huge numbers in growth even with this "sell off" put that 5 years and 10 years and it's mind blowing!