Trying to draw bodies and characters with AI tools : examples of approaches.

After a couple of weeks spent on trying to make a kind of comic / graphic book, i would like to share some toughts on using all only recent artificial intelligence tools as my drawing author.

Drawing a Character : some trials.

Driving the AI to produce humanoid characters with full body and face is tricky. If you wish to have some emotions or actions postures it is almost pure chance based on the prompt you enter.

This may improve in the future with some future models dedicated to such a task.

As a workaround, i restricted the characters to be hidden from the point of view, or illustrated by black silouhettes.
To create those silouhettes, i was using the keyword 'silouhette', 'shapes', etc in mini Dall-E and it gave one of two interesting shadows that i multiplied in derivation by using the IC-GAN. 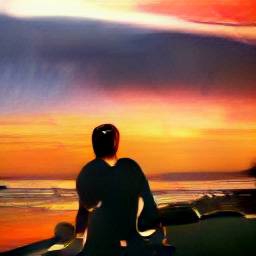 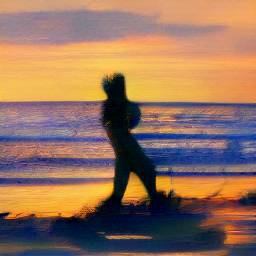 Then I collected dozens of such shadows. In some cases, i also refined a choosen silouhette with help of Diffusion process ( you may use the colab shared by @jotakrevs (https://colab.research.google.com/drive/11MaZKz-TFpmARojTGSWqrNL4y9kdjh_0?usp=sharing), for which you can feed the AI with a picture and a prompt that should drive the neural network in its creation. To give this comic painting style, i often try the "a painting by Enki Bilal" which is not always a proof of efficient result.

Sometimes it is better to concentrate on subject of the pictures than on the style you want. For example using a prompt like " A man staring at the sea", " a Cyborg raising its arms", " A woman reading a book" might slightly modify the posture to your needs.

Altough i tend to avoid using real pictures as init images, i recently discovered the LMAC initiative on Hive. A cool Community (https://hive.blog/trending/hive-174695) giving away, totally free of rights, photographic pictures that are collected and labeled in a search engine https://www.lmac.gallery/ .

This is perhaps the first collection where members explicitely abandon all their copyrights. I wanted to at least to credit this initiative to provide digital artists a palette of picture materail they may re-use for their artworks. I also share 2% of this post with the source image i will refer here below for this exercise, as gentle way to get tractions between hivers submitting their donations and hive authors using their picture.

See herunder a test i just provided from scratch :

I search the LMAC library and found the following picture, given by @muelli. 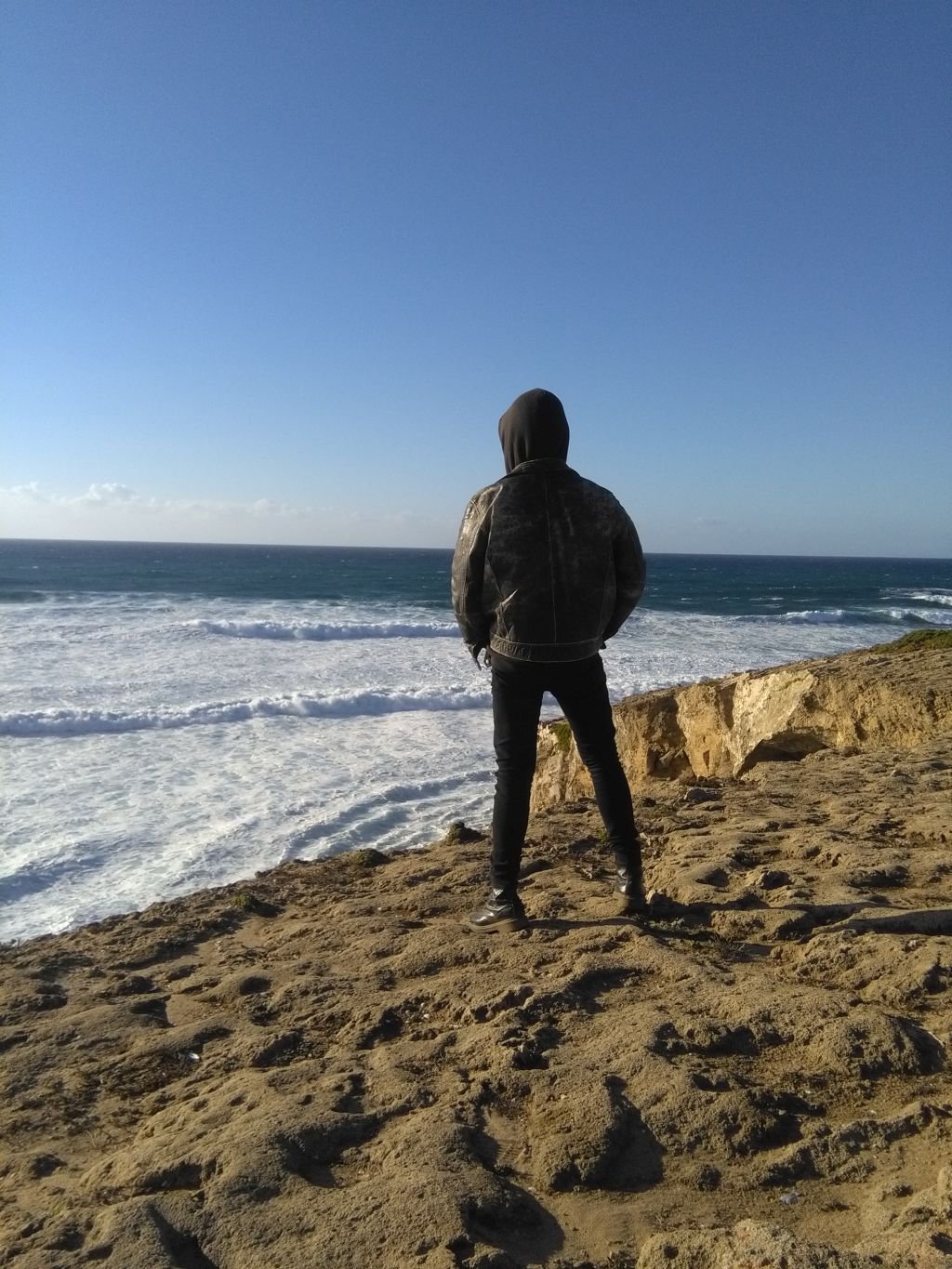 I cropped it to get the kind of point of view i want to emphasize. 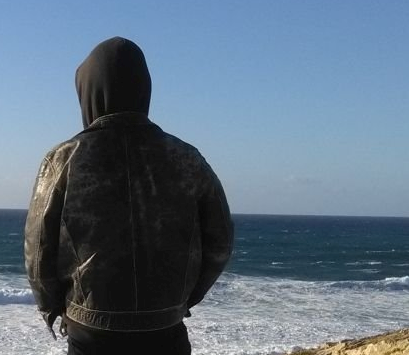 I use the Clip guided diffusion colab, with this image as init parameter, and a prompt named " cyber hacker staring at cloud drones in the sky, a painting by Enki Bilal". 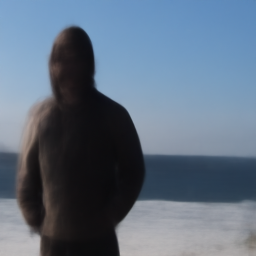 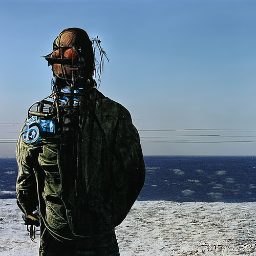 After some session, these are the pictures i collected. Some to be possibly used after a polishing and upscaling via an ESRGAN algorythm, some to be used as init images to get derivation with help of the IC-GAN colab. 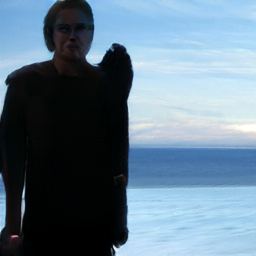 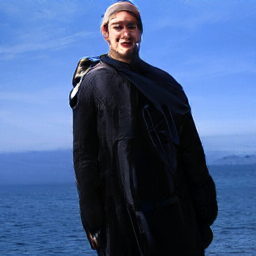 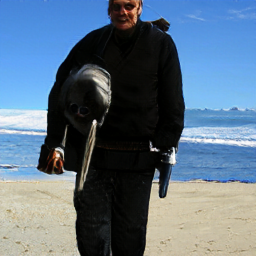 One of those output might then be eligible to be new init images again for Clip guided diffusion, especially those that have been kept a bit blurry to let this algorythm a bit creative. 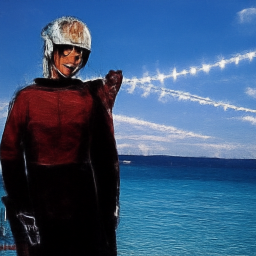 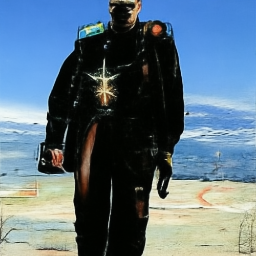 For this example beside the text, i only increase the clip guidance scale to 2000, and saved some frames to be kept in my library for future use.

For those latest results, i used a prompt like 'a cyber space pilot in front of sunlights, a painting by Enki Bilal'

At the end i upscaled my preferred one and made some zoomed picture. 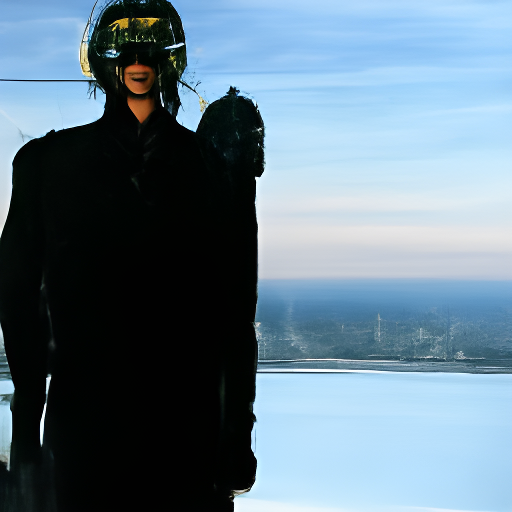 my preferred one, because the face traits are quite ok. 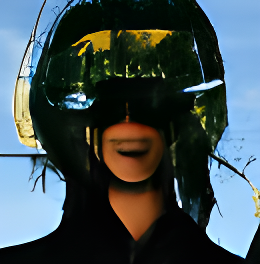 As you might guess, one picture can generate an infinity of possibilities. I keep a bunch of them as a stock image to maybe build some follow-up of my comic book.

I you read so far, thanks. I hope i feeded a bit your curiosity about the work behind my current ongoing graphical delirium.

If you curiosity is picked, i can only recommend to check the post of the people belonging to Latent Space Community - a child of - the Alien Art Hive Community.
Stay tuned.

My previous posts are here

Thank you for sharing all this :)

We are excited that you found out about the LIL initiative @dbddv01!

Great to see what you were able to craft out of the images you found in the LIL and thank you for appreciating LIL contributor @muelli as 2% beneficiary. We believe this really is a win-win and are happy to support your post with a vote by our LMAC trail.

Thank you for spreading the word about the LIL in your blog and communities on Hive!

💬If you have further questions about the LMAC or the LIL please leave a comment or come right over to our dedicated Discord at:

Hey, thx a lot !
I think that any digital artist on Hive must know this initiative. Copyrights is still unclear matter and here you provide freedom. Will consider giving away a bunch of picture also on short term.

Thanks for your feedback and your interest in the LIL! We are looking forward seeing your contributions!

You definitely got some interesting results with this one! Awesome stuff

Congratulations @dbddv01! You have completed the following achievement on the Hive blockchain and have been rewarded with new badge(s) :

You got some good result. Enjoy a slice of !PIZZA I agree ! i kept also this one in a safe place for further exploitation.
Thanks for passing by.

Wow, that's pretty awesome what you did with my picture. Great!
Nice that the #LIL attracts more and more artists, that's what I call success.
All the best & thank you! 😎