‘The Horrors of Kwiksave’ is a candid recollection of my memories working at Kwiksave (the now-defunct discount supermarket chain) as a 'Stock Lad'.

I wasted over FOUR years of my life in this maggot-infested hellhole and still occasionally wake up drenched in sweat after enduring a nightmare in which I am working there still.

Some of the names have been slightly changed simply to save my arse in case anyone takes offence at some of the details regarding my facts or opinions.

Many of the people mentioned are now dead as this happened so long ago, but their siblings are not.

This is the 'HIVE Special Edition' of a multi-part autobiographical story (with a little over-embellishment on some of the details) I posted on STEEM over 3 years ago.

It contains a LOT more detail and content than the original and will fill in many gaps that were missed the first time around. Other Articles in this Series:
Chapter One: A Prelude to the Best Job in the Land
Chapter Two: The Job Centre
Chapter Three: The Interview
Chapter Four: Christmas is Coming
Chapter Five: The Changing of the Blades
Chapter Six: The Staff
Chapter Seven: The Auxiliary Staff and The Load
Chapter Eight: The Sugar Maniac
Chapter Nine: The Accusation and "Big Lad"
Chapter Ten: Naggy
Chapter Eleven: Shit & Noise
Chapter Twelve: The Death of Mort
Chapter Thirteen: The Time of Many Managers
Chapter Fourteen: The Calm before the Storm
Chapter Fifteen: David Dire
Chapter Sixteen: Bad Totty
Chapter Seventeen: Tracy, The Wild One

‘Some kids are best left to fend for themselves, and others were born to stack shelves’ – Steven Wilson

The New Year did not bring any joy to Kwiksave, if anything it was to get worse.

What was it about Kwiksave Managers christened ‘David’?

I mean, were they all complete wankers and obnoxious lazy twats, who liked to do fuck all besides sit in that one-way glass-framed office dictating the flow of work.

Mort had been in your face when he could be bothered to converse with you at all, that is straight, direct, and blunt.

This new bloke, Dire was an insincere, backstabbing two-faced oversized walking frog with the palest white skin you have ever seen and bulging eyes that could see around corners. 
...'the yoghurt stand was immeasurably smaller than this one, and took all Dire's stamina to fill once a week'...

Like Mort, his idea of ‘work’ was to fill up the yoghurt stand which was around once a week.

The only other time you would see him was when he waddled to the semi-derelict toilet at the far corner of the store, when the load arrived or the bread man delivered the fresh loaves each morning.

If Dire had attempted to even empty a pallet of bog rolls onto the shelves, he may have overstretched his physical limitations and ambulances could well be arriving at the front doors.

Martin had assumed the non-official role of ‘Head Stock Lad’ somehow but I still felt he had no loyalty to Dire and was part of us.

His strategy of pulling Martin from the Oldham store was working perfectly. Give him an unofficial label, up the stock lad count by 33% and he could sit on his arse all day and do nothing.

Dire lived literally 700 yards from the store entrance but still opted to drive to work in his Ford Cortina Mk4. 
...'Dires' Cortina was even the same colour and in immaculate condition. It's little wonder with the low mileage it attained'...

Talk about finding his comfort zone at the expense of others.

If there was one piece of good news I remember it was Dire telling Martin, who distributed the news to Welder and me that we would not be cleaning the black asphalt floors anymore.

Kwiksave had likely been warned that using Stock Lads as cleaning operators was not part of their contract, or some brave lad had taken a stance in another store and challenged them.

I don't believe for one second that the management had thought about our welfare, or that we didn't particularly want to further our developing skills from shelf stacking to mopping filthy floors.

In any case within days the cleaners arrived in the form of a massive loud middle-aged Welshmen who must have been at least 22 stones in weight, followed by an ageing slightly built lady who we would come to know as ‘Jean’. 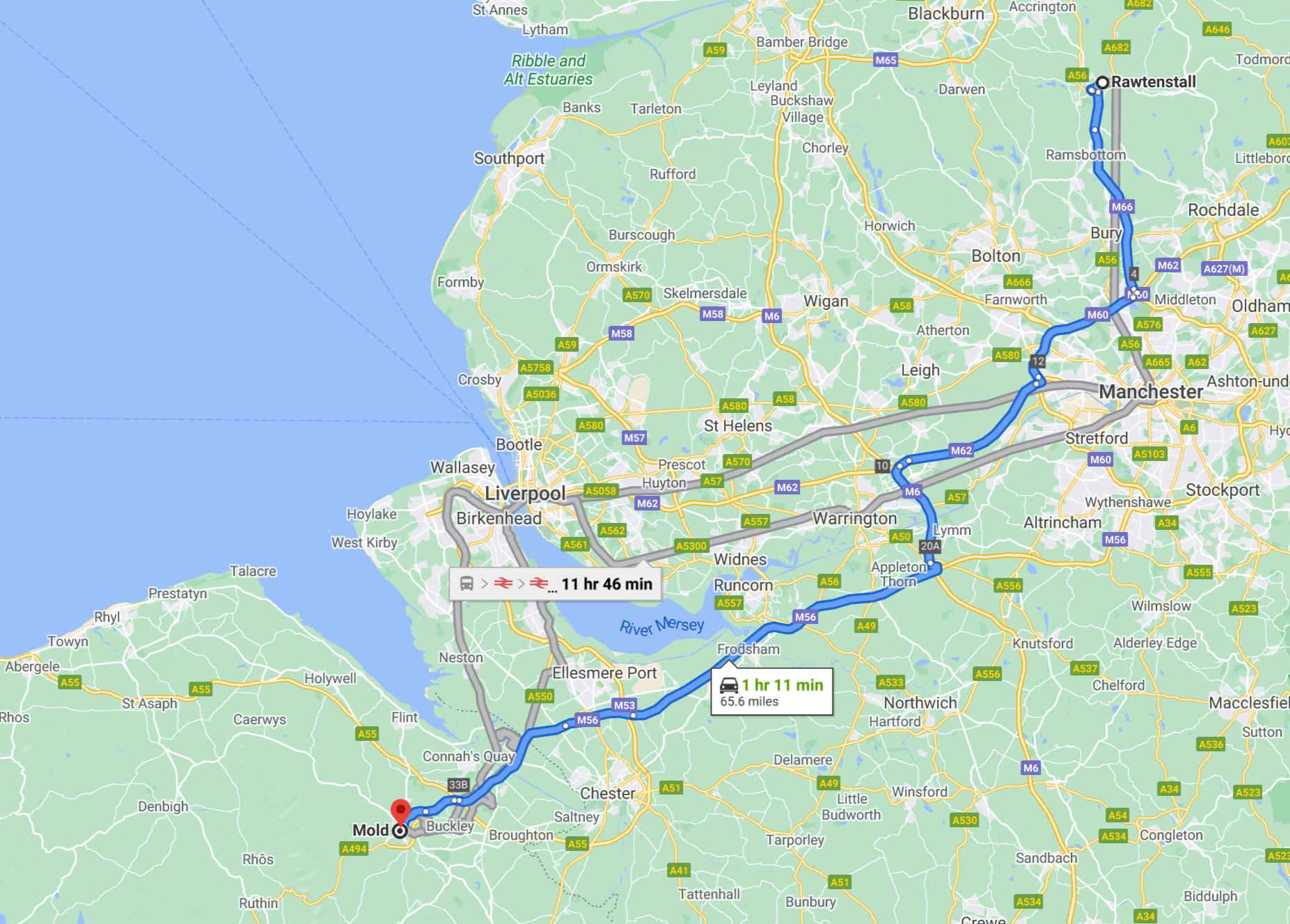 ...'the quickest and shortest route to Wales is over an hour and Mold is on the border. Did they not trust English cleaners with their precious asphalt floors?'...

At the time it did not click, but with Kwiksave being a welsh company it does make sense that they had sourced someone local.

What makes no sense is that this crew must have travelled from Wales which is a good 70 miles or so to the Rawtenstall store to clean the floors.

We were not introduced to the cleaners by Dire which would have taken some effort, something he was severely lacking.

Martin was far worse than me for giving people ridiculous names, and it was him who was responsible for the name of yours truly, Slobberchops, and also this new cleaner.

The huge bloke was named Colin but quickly gained the handle, ‘Buff-It-Up’ due to the buffing machines he brought with him, and the way he used to quietly hum ‘Buff-It-Up’ to himself in an out of tune melody when he thought nobody was listening.

Kwiksave had employed somebody quite insane this time. I don’t know why I was surprised.

We soon learned that ‘Buff-It-Up’ was quite approachable to us Stock Lads, looked rather like my persona to some extent, and berated poor Jean quite often.

I did have a photograph of him once, but sadly can't find it. The bloke literally resembled a raving lunatic. ...'Buff-It-Up did resemble my avatar somewhat, where do you think I found my inspiration?'...

We used to hear him scream, ‘Jeeeeeeeeaaaaaaannnn’ across the store frequently in his strong welsh accent, only to see Jean who was like a little scurrying mouse come running up to him in response.

Jean looked permanently stressed and had little time for us. Trying to engage her conversation was quite the challenge and she appeared to be fearfully constantly looking over her shoulder.

She did look rather witch-like, would not have looked out of place with a broomstick and pointy hat but we all could not help feeling some sympathy for her.

While we never witnessed any physical abuse, it did cross my mind.

Was this monster Welshman all bark and no bite, and did he harbour some strange perversion behind that strange muttering habit?

Could it be that ‘Buff-It-Up’ was so enamoured by the buffing machine that he had sex with it in the back-shop when nobody was looking?

If so, we never did find out.

Cover Picture is a combination of free sources from here and here, combined and edited with Luminar 4. Any unsourced images are my own.

You really paint a portrait in words :) Some proper characters. Don't you wish you still worked there? You could run the place.

I had a terrible feeling that this one was so mind-drummingly boring that nobody would comment. Like the preface says.. I dream of it occasionally and did a few nights ago.

NO.., I do not wish I still worked there, it was a living nightmare... really!

I used to love the scent given off by that milky coloured floor polish slapped about with a rag headed mop.

I think your memories are a little too rose-tinted. Who loves mopping floors? We were slaves to the shelf, not bloody cleaners!

I was hoping you would remember Buff-it-up", tell me he's still alive, and now buffing your local Tesco.

nah he is dead, his place abandoned a great little UX lol

Lol. A smorgasbord of crazy folk. I had forgotten about Cortinas. Them and Capris, in my first job all the 'studs' drove them.

I saw this quite recently and it made me laugh. The 3.0 version.. 0-60 in 9.5 seconds and 119 MPH. Woo... so impressive. They even got that bloke with the deep gravel voice for the commercial.

Lol, the difference between driving and motoring. That's what I think every time I get in the car, hahaha!!

hahahaha - I worked with these creatures before in my past.

Creatures..., that's not a bad analogy!

retail is fucking wank isnt it..
this takes me back to my days at morrisons... I also hated filling the yoghurt shelves...

@bingbabe worked at Morry's for a while, before getting bulled out by the old-school club. I don't hold any respect for that chain whatsoever. Little has changed since 1983.

luckily i got the flick... its just a shame it wasnt for sticking the nut on the general manager..

Mopping floors? Filthy or not I wouldn't settle for that as a job not now nor even in the past. Lol

I was young so just accepted what they told us to do. You could get sacked in those days for refusing to do work, even out of scope jobs. Cleaning the bogs was another one.., bloody terrible!

Seems your days wasn't as advanced and eye opening as our's where we make our choices and nothing or no one can do anything about it. I love this age so much. Hehe! Don't mind me I'm just being silly

Cleaning the bogs was another one.., bloody terrible

Cleaning the bogs? A no go area. Terrible indeed

Hey @slobberchops, here is a little bit of BEER from @steevc for you. Enjoy it!

Congratulations @slobberchops! You have completed the following achievement on the Hive blockchain and have been rewarded with new badge(s):