After traveling for 6 days, I decided to take an early pre-walk on Monday evening to make up for lost time. I've been debating doing this to combat the can collectors and others who skim the piles on my curbs in the daylight. Whether I adapt or stick to my preferred late night schedule where I can hunt in private, the results of my first early walk in a while were amazing. If I waited until overnight, there's very little chance I'd have found this: 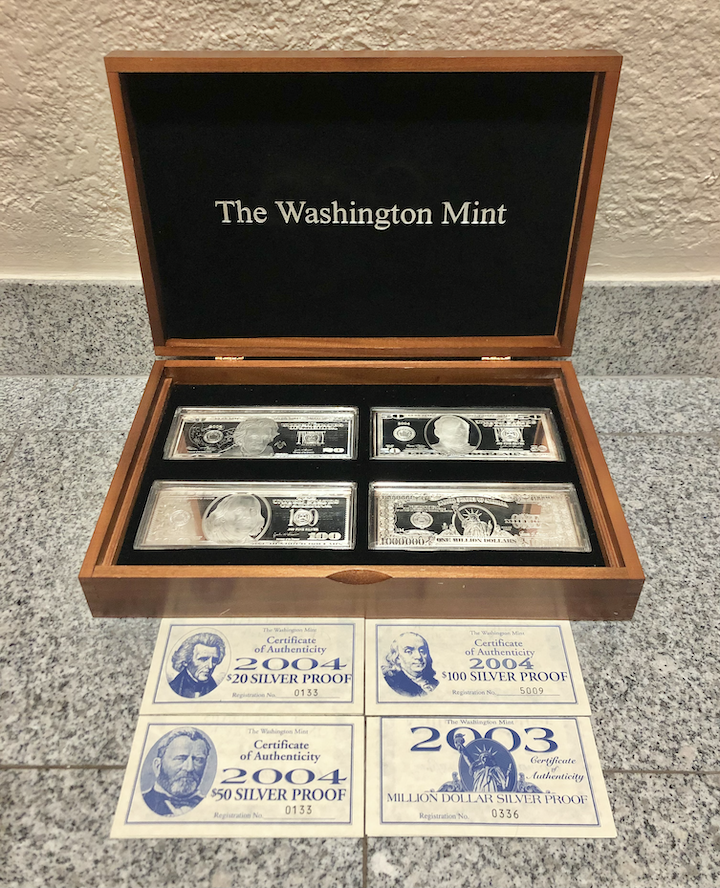 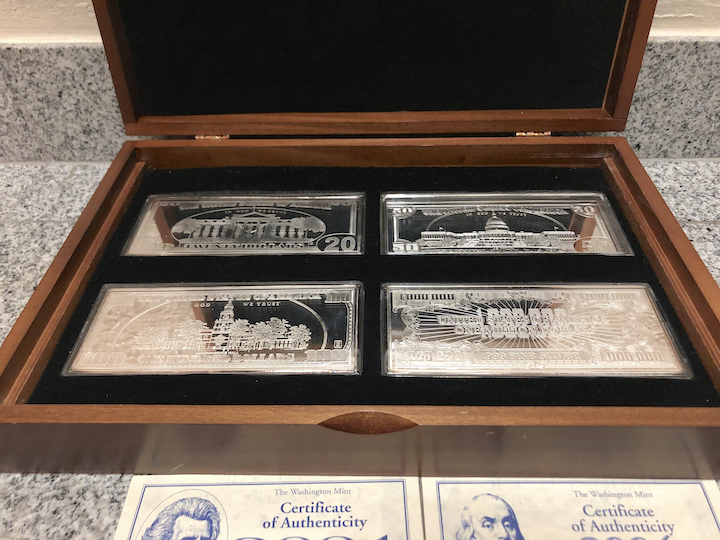 These are .999 fine silver commemorative bank notes weighing 4 ounces each!

They were in their original case, with their certificates and the original receipt.

Saved from the TRASH in broad daylight. Crazy.

So how did I find this? Glad you asked.

Walking by one of my favorite pile locations outside a large condo, I saw vintage furniture on top of the black trash bags. This typically indicates an elderly person moving out or moving on, a good spot to investigate. Mixed in with the furniture were nice two wooden boxes that were partially closed at the time. While most wouldn't even notice them or stop to check them out, my instincts were screaming to open them up. The boxes looked a little too nice to me.

This is what I saw inside both of them at first glance: 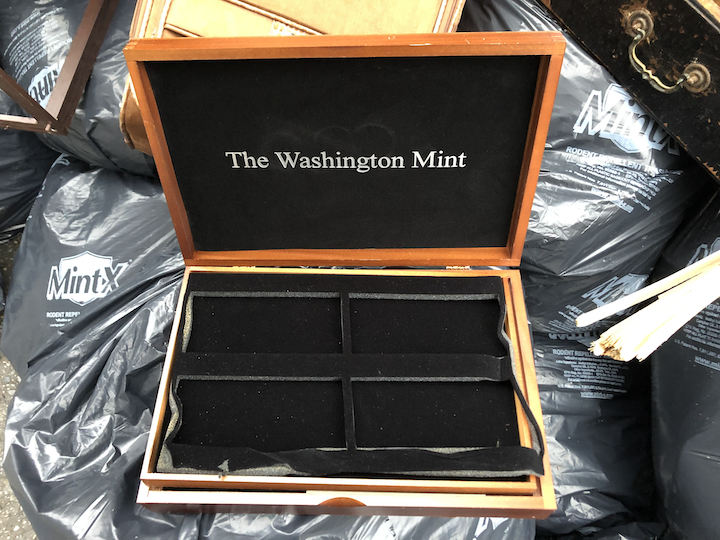 So how did I make 16 ounces of silver instantly appear?

Simple... I realized that one box was heavier than the other, so I lifted the first layer off the top. Underneath yielded a "holy sh*t" moment of pure silver bars with all of their documentation. It's one of the best feelings to get when hunting for stuff outside. This was a small jackpot that was now all mine because of my drive and intuition. Nobody can take that victory away from me. 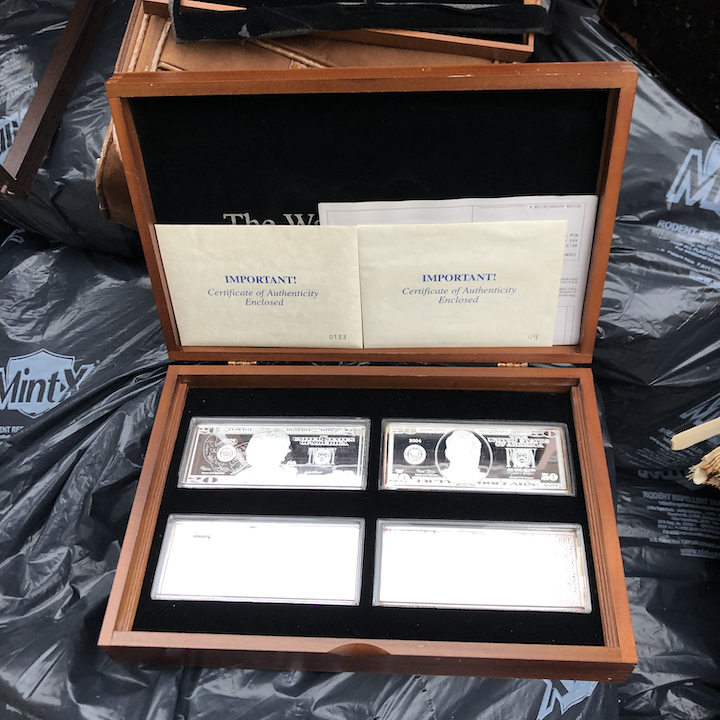 At the same time, the building's maintenance worker was rolling out more bags, so I asked him if he'd seen any more of those boxes. He said no, and that he thought they were all empty. I tried to probe into whether they found and pocketed the bars that were clearly missing from both boxes, but they seemed to have no clue. I showed him what I found, but didn't want to rub it in since he'd just handled the box a few minutes before.

My main goal in asking to was learn if there was a chance the other bars might be in the black or recycling bags. According to the certificate in the envelopes I was lucky enough to have, 10 commemorative bars, or 40 ounces of silver were unaccounted for.

With lots of commuters passing, I took some foam from the second box since it was in nicer condition, and hid the box for my return later.

Seconds later, sitting down at a bus stop to process what the heck I just saved: 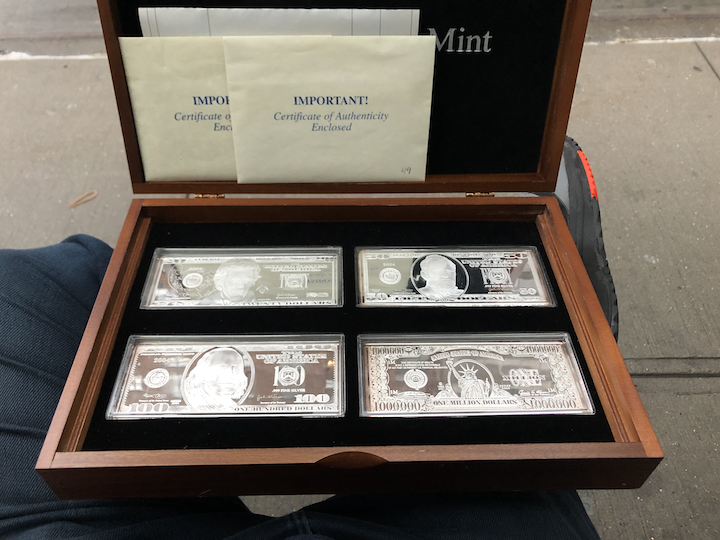 .999 FINE SILVER in your face with light tarnishing on the edges: 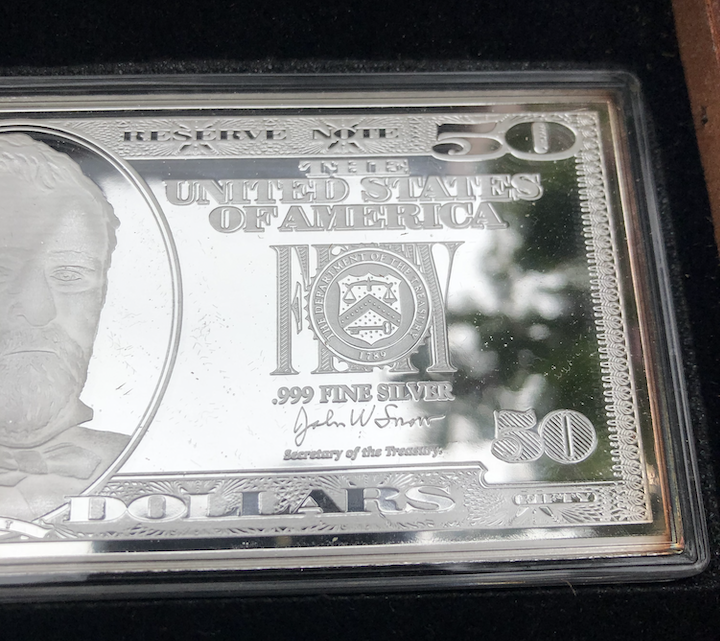 After getting back home and waiting for nightfall, I went back out to see if I could find the bars that were currently unaccounted for. I did a thorough search through about 25 garbage bags the hard way, mainly by feeling them from the outside and opening those that showed promise. I also went through all of the clear recycling bags in case the bars got moved into those. I didn't expect to find them, but I had to try.

Despite my best reasonable effort, I couldn't find more. On the bright side, this exercise yielded a near complete LEGO Yoda set, some good LEGO minifigures, Pokemon cards for my nephews, and a high end aquarium filtration machine. I also found some nice shoes and some brand new merchandise that I put on the sidewalk for others to be able to take in the morning. 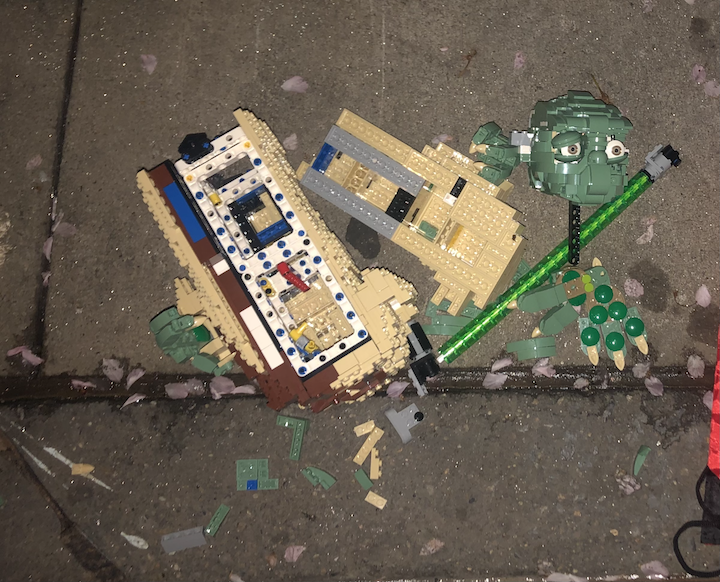 Home again, I researched the person on the order form to confirm that they died in 2019. While I'll wonder where the other bars went, I tried to focus on being happy that I could save some of them. I'm not sure if I'll keep them or sell them yet. Selling them as a set with the papers and case should yield about $800-$1,000 for the right buyer, but they're a nice asset to keep, especially with the story. My other thought would be selling them and buying more ounces of regular silver with the proceeds. These bills have quite a premium over spot for their collectibility, so I could compound the silver weight nicely. Three of them were limited to a mintage of 10,000, while the other was 25,000. They look really nice though and would make a nice decoration in my future house's room of notable salvaged finds. It's a find that I'll always remember. The rush when pulling back the foam to find the silver in all its glory was priceless.

Here are a few more shots, because why not? 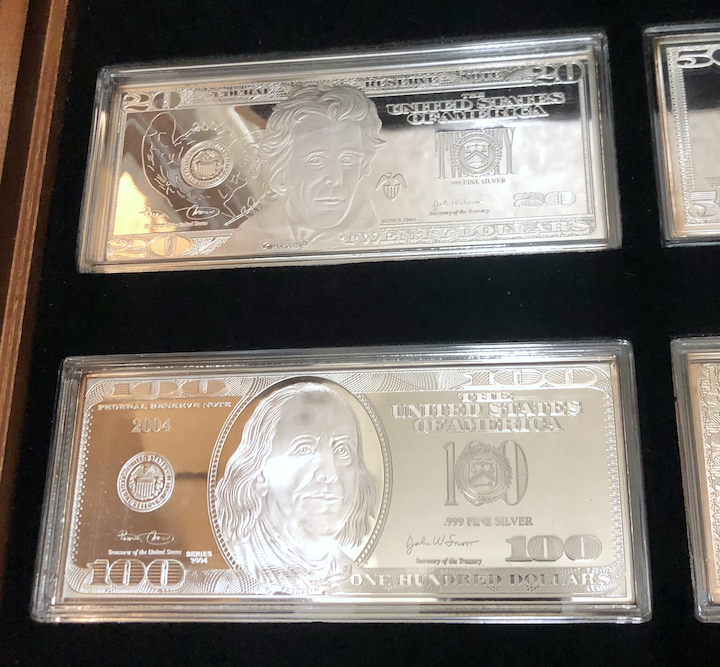 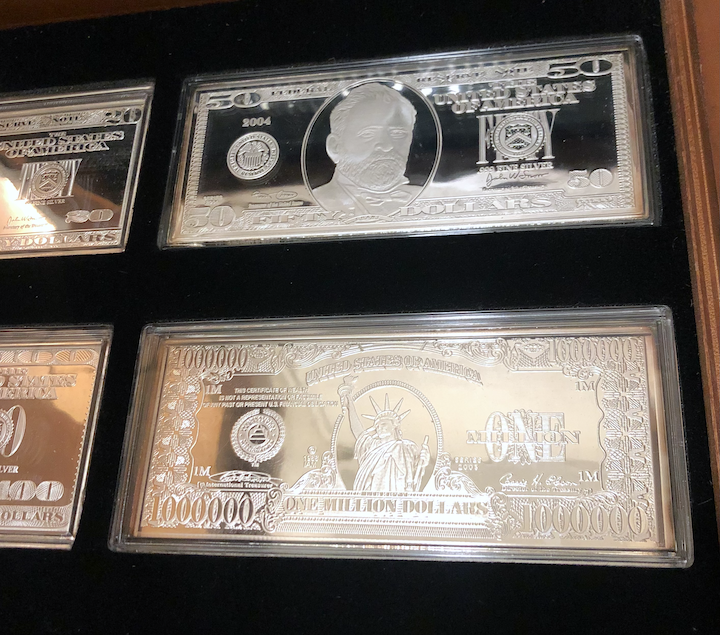 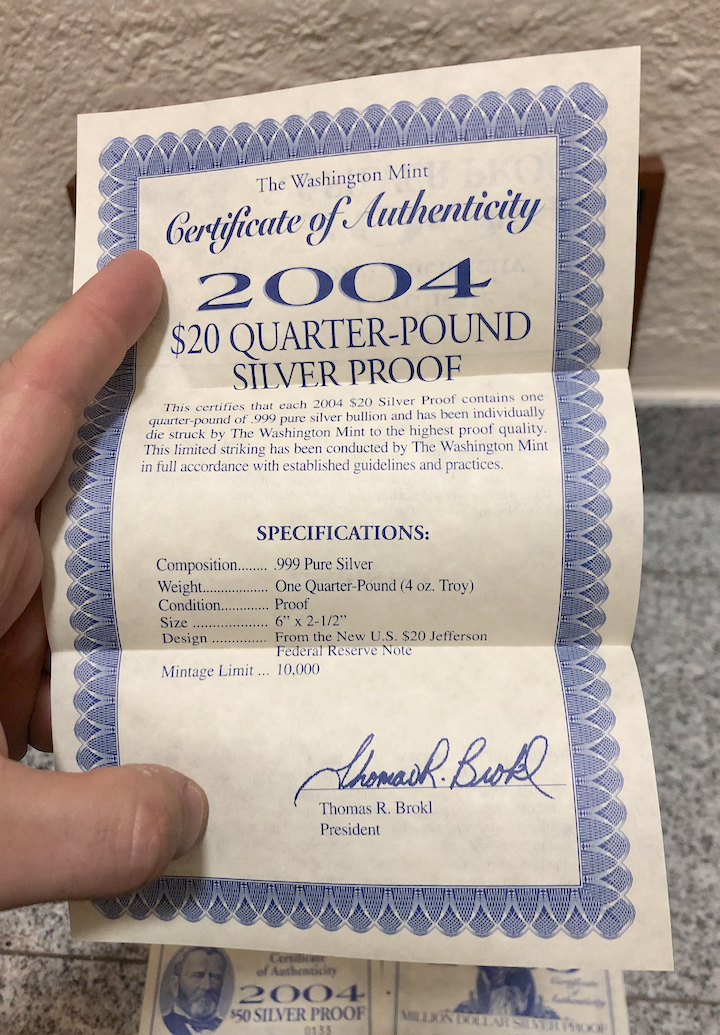 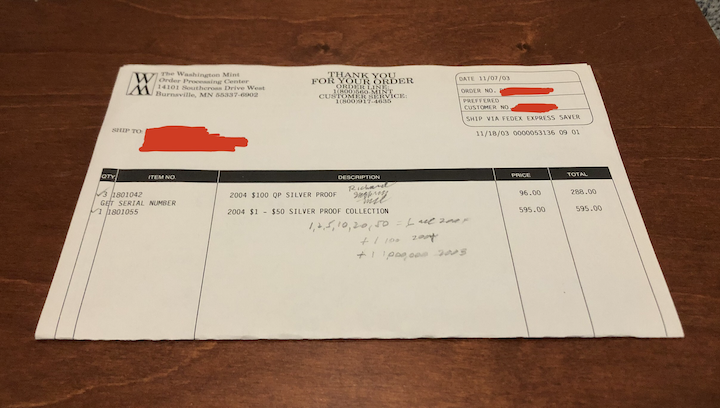 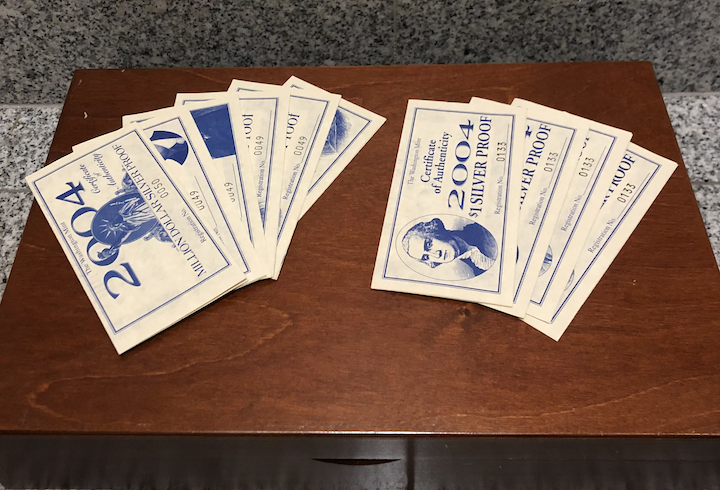 I hope you enjoyed this. It's fun to be able to share these finds since I often feel like I'm in my own world in my city where most don't care.

As great as this find is, it's not nearly my best find. It's special though and up there. While sterling silver or small bits of silver jewelry are far more common, finding pure silver in this scale is pretty rare. I'd equate it to the 21.6 ounce sterling silver Austrian serving tray from the mid 1800's I found just 1 block from these bars: 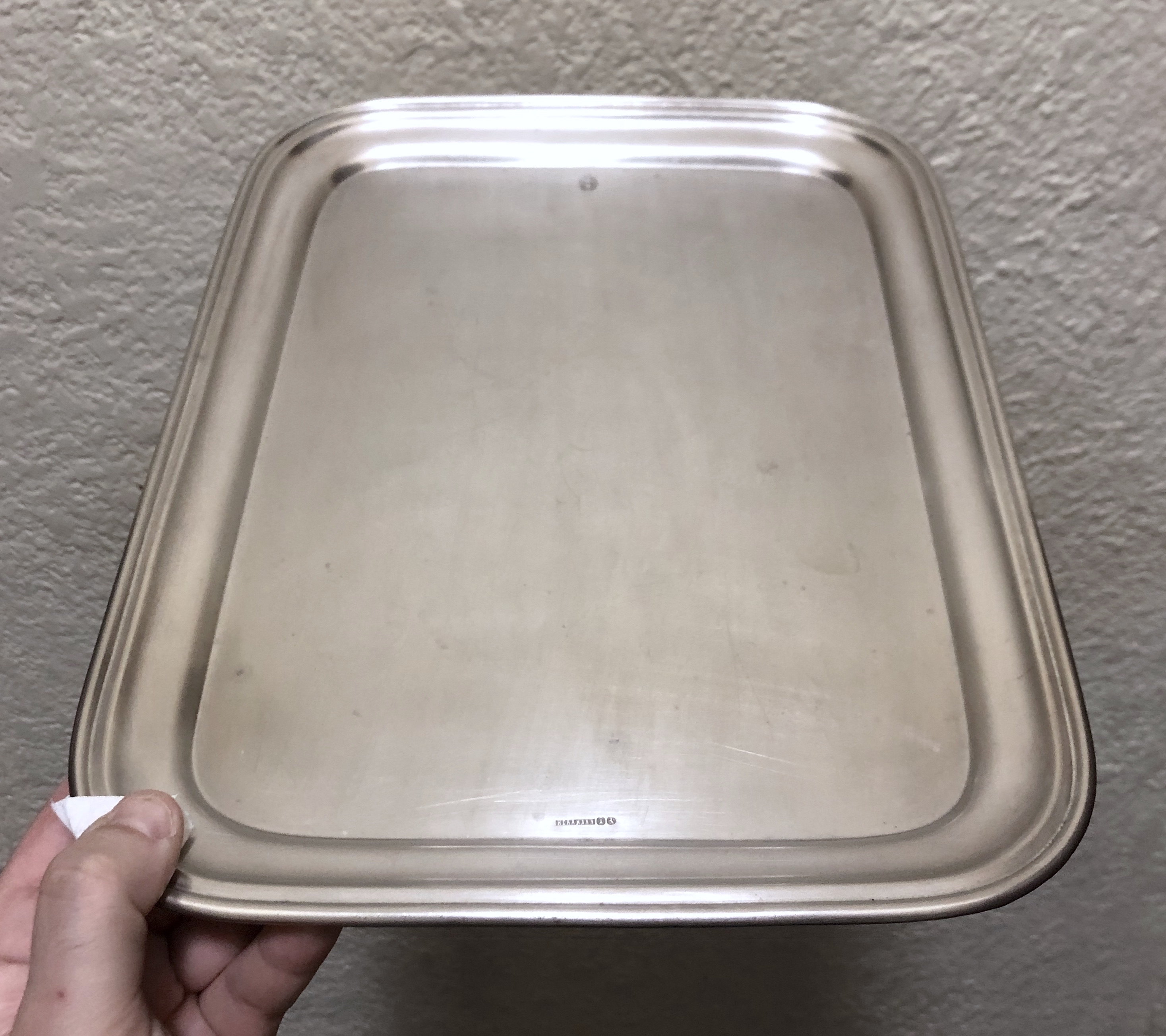 You'd never believe the amount of valuables that are discarded in my city on a daily basis. It makes me sick, but also excites me at the opportunity I have to save them.

I can only cover so much ground while keeping it fun. If I did 2 or 3 recycling grids a day, I'd make a fortune, but I want to keep this fun and exciting.

If you're seeing my recycling post for the first time, the value in it isn't in the entertainment from the handful of items I show as saved/sold. It's from the passion and hustle I consistently exhibit off-chain to produce the items for posts, and my goal of motivating others to address our global waste problem.

Thanks as always for your interest and support.

Please reuse, repurpose and recycle. If you aren't able, then donate them to shelters, churches, or thrift stores.

Have you saved anything in the last month? If not, forget excuses and change that today. My goal is to motivate here.

Bonus finds last night on my early post-gym walk... $250 Rabbit air purifier and a $350 Litter Robot 3. This is the fourth litter machine I've found, with all previous ones selling within 24 hours. I have to find a power supply for it, and also have a backup working base for insurance in case there's any issue with the one here. Once I clean, test, and list it, it'll be gone in a few hours. People are obsessed with these. 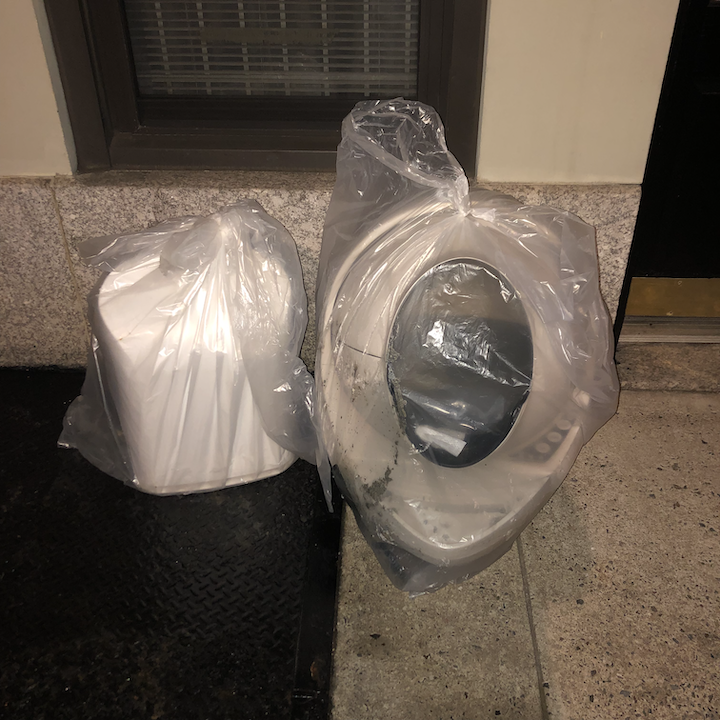 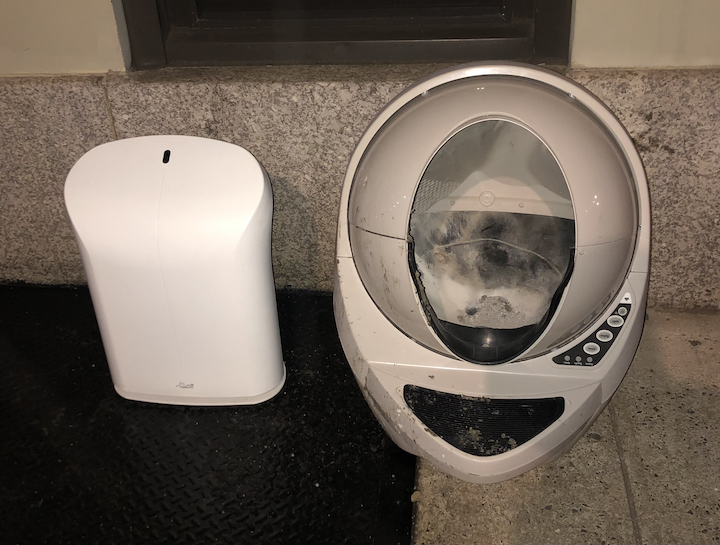 That is unbelievable...you never cease to amaze!

It's nuts what people throw away. Amazing find and intuition you got!

I gather that he lives in a super, super, super rich area. A stack of signed baseball cards that were tossed out by the player... actual money in the trash... the level of wealth is 💎💎💎👌🏼

you've outdone yourself this time! what a score!!!

Wow, who in the world would trash pure silver bars?

Definitely not the original owner who passed on. I bet he's rolling around in his grave at his relatives for doing that.

You need to assemble a whole team to cover more ground!

Could you please send me a couple of the silver bars so I can check them for authenticity...I promise I'll send them back😋🤣😋