A difficult question, but a necessary one if the impact of the agricultural industry on the climate is to be reduced without compromising the food supply of billions of people. 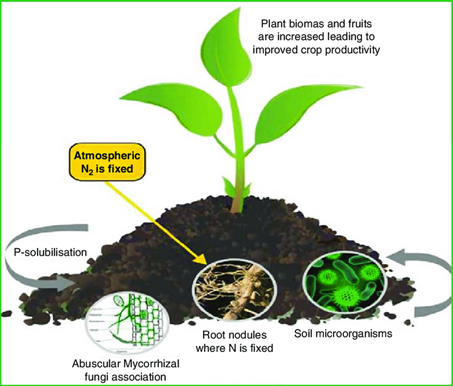 Hello ecotrain friends, I hope you are doing well, surely you have heard the word biofertilizers, and surely you already know that they are an alternative to make agricultural production more environmentally friendly, however, the transition to the use of biofertilizers has not happened in most of the world, today we will explore a little if it is in fact feasible such a transition, why it has not happened yet, and how it could happen.
First let's cover the basics. 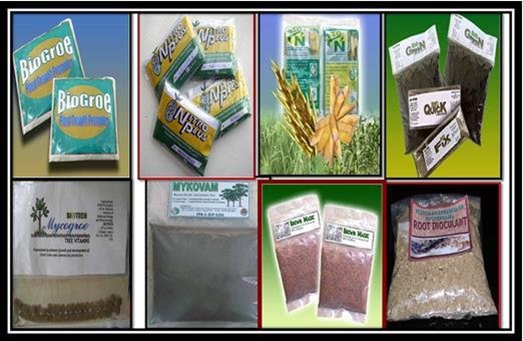 [Some examples of commercial biofertilizers].

Compared to traditional synthetic fertilizers that inject a large amount of chemical compounds and minerals beneficial to plants quickly, which is consumed by plants quickly [usually in a cycle of planting and harvesting] thus producing higher yields and faster development, but that make necessary the use of large amounts of fertilizers during each season, and crop rotation because although the synthetic fertilizer improves plant health, it does not supply all the necessary compounds or maintain nutritious soils over time.

Biofertilizers can keep soils fertile for a long time, the problem is that they do not produce the same results per crop as synthetic fertilizers, this point will be discussed later.

But synthetic fertilizers are a problem for the environment, since to produce them requires a lot of energy, the process known as Haber Bosch through which nitrogen is extracted from the atmosphere to make ammonia is usually powered by power plants using natural gas, although in some countries like China energy produced by burning coal is still used to make hydrogenated fertilizers. However, 2 percent of the greenhouse gases released into the atmosphere come from fertilizer manufacture.

Recently due to the conflict between Russia and Ukraine, the price of synthetic fertilizers has skyrocketed, as Russia and Belarus are among the largest producers of phosphorus and potassium in the world, both important components for the production of hydrogenated fertilizers, additionally, due to the sanctions the increase in energy prices makes the Haber Bosch process more expensive, and therefore, fertilizers even more expensive.
So for economic and environmental reasons it is necessary to expand the use of biofertilizers.


But why hasn't this happened?

Basically, biofertilizers are more complex than traditional fertilizers, since a microorganism that thrives in soil, may not thrive in another type of soil, and therefore the biofertilizer would not be effective, even if the soils are the same, variations in climate can affect the performance of the same, variations even in the microbial ecosystem of soils can define the success or failure of a biofertilizer. Therefore its use on a large scale around the world would require extensive studies, which although possible, have not been carried out, because until recently it was cheaper to produce synthetic fertilizers than biofertilizers, so the big agrotechnology companies never bothered. But that has changed.

There is a way to make them work

In a word, BIOTECHNOLOGY, the recent advances in biotechnology in the last decade have made possible many things that border on science fiction, with the power of the new supercomputers the sequencing of genomes opens the door to their manipulation, making it possible to modify life forms to have certain characteristics, this includes plants, bacteria, fungi or animals...

With biotechnology it is theoretically possible to create Super Biofertilizers that can be produced quickly and adapted to a large number of plants, climates and soil types, in addition to having a higher performance providing more nutrients than the biofertilizers currently on the market. It is even theoretically possible to add the microbial fertilizer to the seeds, making them a complete package of self-fertilizing crops.

And it is precisely the latter that Joyn Bio and its associates have been working on since 2017, they have already advanced the project and it is hoped that within 4 or 5 years they will be able to produce a biofertilizer attachable to corn, wheat and rice seeds that will reduce their need for synthetic fertilizers by half, not ideal, but it would be a great advance.

One of the major funders of Joyn Bio's research is Bayer, the pharmaceutical company, and there's a possibility that it will buy out Joyn Bio in its entirety through a subsidiary....

Bayer is one of those corporations that when you look at their dark side seem to be run by a family of supervillains, Bayer was part of the IG Farben consortium, if the name rings a bell, you remember it from a World War II documentary, IG Farben was the company that paid the Nazi scientists to carry out their terrible experiments on the Jewish population in the concentration camps, and who produced the Zyklon B gas for the 'final solution' Bayer was one of the 4 companies that survived the liquidation of IG Farben.

But Bayer's list of dark deeds did not end there, nor was it confined to a single era.

In the late 70s Bayer produced a drug to help people with blood clotting problems, this drug was synthesized using the blood plasma of people without the disease, Bayer to reduce costs began to use blood from high-risk populations, such as prisons or clinics with high rates of homosexual patients, with which the treatment was contaminated with the HIV virus, causing several deaths of people who used them.

But the list goes on, tax evasion, hiding the side effects of their drugs, avoiding the market release of drugs that would make their business less profitable etc... more information here. https://www.i-lawsuit.com/the-dark-history-of-bayer-drugs/

Unfortunately genetic research and manipulation is an extremely expensive business, so it is no surprise that many of the most promising genetic research projects in the world are in the hands of corporations like Bayer, which have their own interests that do not align with the needs of the world.

Another possible reason why biofertilizers are not yet widely used.

Since we are talking about corporate interests, there is something I should mention, life forms found in nature and the basic principles of selective breeding or similar CANNOT BE PATENTED, that is, even if an excellent, cheap and effective biofertilizer is manufactured, its basic principles would be based on the use of basic principles of selective breeding of bacteria, and bacteria accessible to everyone, they could not patent it, therefore they could not make massive profits by being the only ones with a solution to the global problem.

But... Genetically modified microorganisms, and novel processes for their use [such as grafting them onto seeds so that they develop together with the plant] CAN BE PATENTED. More information about this here https://abg-ip.com/living-beings-patented/

This is, of course, speculation.... But it makes sense, don't you think?

Still, it is good to know that there is an alternative to synthetic fertilizers, we just have to hope that it arrives on time, and to all.... Since time and options [and now food] are running out at an alarming rate. Congratulations @anyelina93!
You raised your level and are now a Minnow!

Interesting and super informative as usual. It is good to know that there are alternatives to synthetic fertilizers available. Thanks for posting your educational articles in the EcoTrain community
❤️🤗💕🤗🤗❤️🤗💕